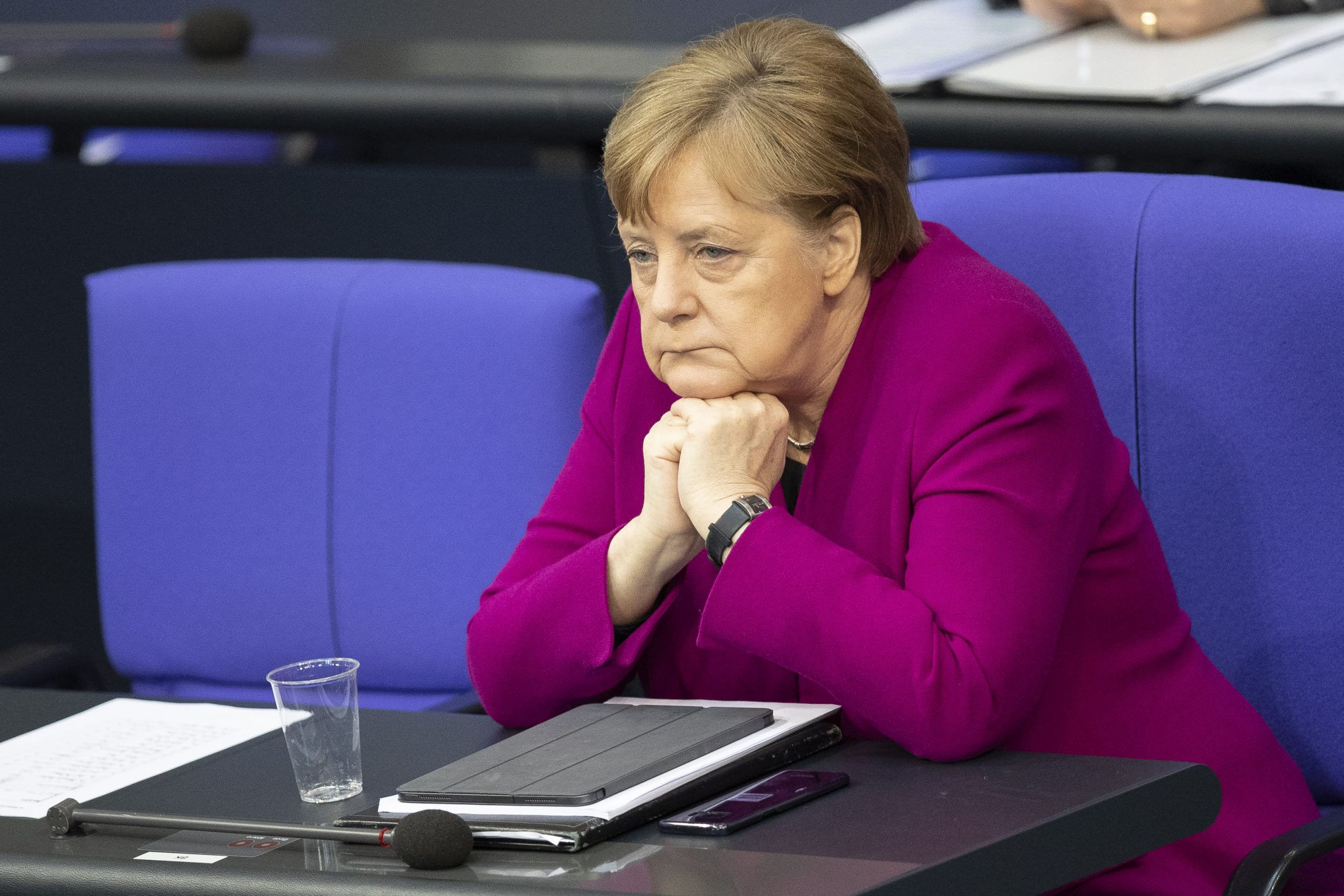 BERLIN, GERMANY – APRIL 23: German Chancellor Angela Merkel (CDU) sits at the Bundestag on April 23, 2020 in Berlin, Germany. Germany is still at the beginning of the coronavirus pandemic and will have to live with it for a long time, the Chancellor said.Maja HitijChancellor Angela Merkel’s ruling conservative alliance has seen its popularity ratings hit an all-time low, deepening an apparent shift in voter trends in Germany.Merkel’s Christian Democratic Union and its sister Bavarian party, the Christian Social Union, saw their popularity fall to 23% in the latest voter poll conducted by Kantar for the Bild am Sonntag newspaper.The survey of 1,910 Germans showed support for Merkel’s CDU-CSU bloc had fallen yet again, from 24% the week before to hit the lowest ever level in the history of the weekly poll.Meanwhile, the Green Party remained in the lead with 26% of the vote, albeit with its rating also down 1 percentage point from the week before. In third place in the poll, with 16%, was the Social Democratic Party, the current junior coalition partner with the CDU-CSU.The center-left SPD announced Sunday that the current Finance Minister Olaf Scholz will lead its election campaign. So he will be facing the Greens’ Annalena Baerbock and the center-right CDU-CSU’s candidate Armin Laschet in the race to replace Merkel in September’s vote.Greens’ ‘honeymoon’ period?In a show of just how much voter trends are changing, the Green Party has gone from being a fringe movement to a contender to lead government. If current opinion polls are borne out in the election then it will lead Germany’s government, very likely with a coalition partner or two.Deutsche Bank economists led by Stefan Schneider noted that when it comes to coalition options, “nothing is impossible (at least arithmetically).””The nominations of Annalena Baerbock and Armin Laschet as chancellor candidates have clearly helped the Greens to gain ground. They might not only be the kingmaker for the next government, but could now even appoint the next chancellor. The current shift in voters’ sentiment allows for a whole bunch of coalition options,” the economists said in a note Friday.Deutsche Bank’s economists said they continue to attach a marginally higher probability to a black-green government (a CDU-CSU led coalition with the Greens) compared to a Greens-led traffic light coalition with the SPD and the Liberals (the FDP party). Only the right-wing AfD has been ruled out as a partner by all the others.”It remains to be seen whether the honeymoon of Mrs. Baerbock and the German voters will last until election day in September, as the green chancellor candidate now needs to explain to the voters how exactly she wants to achieve her policy proposals,” they added.Covid crisisThe departure of Merkel after four terms in office is heralding a shift in German politics. But the coronavirus crisis might have also shaped a fall from grace for the CDU-CSU bloc over its handling of the pandemic — a challenge for any government.While Germany’s initial handling of the public health crisis was praised — it managed to keep the initial spread relatively under control with a robust track and trace system and modern hospital infrastructure that kept deaths low — it has faltered as a third wave of infections swept through Europe earlier this year.In addition, the country’s vaccination drive has been sluggish. Only 9.7% of Germany’s adult population has received two doses of a coronavirus vaccine, with 34.3% having received at least one dose of a shot, according to data from the European Centre for Disease Prevention and Control. France, Spain and Italy have all given two doses to a higher number of people, ECDC data shows.From Sunday, Germany has loosened restrictions for vaccinated individuals or those that have recovered from a recent Covid-19 illness, meaning that social-contact rules, quarantining following travel and a nighttime curfew no longer apply to those individuals.To date, Germany has recorded over 3.5 million infections and 84,844 deaths, according to data collated by Johns Hopkins University.