At Nathan’s hot dog eating contest, there is only one star 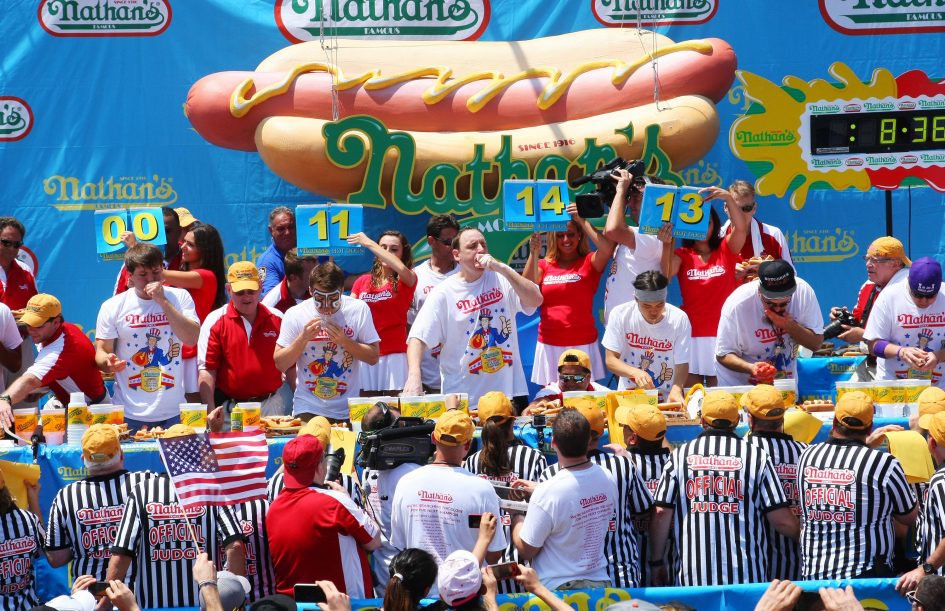 Nathan’s Famous hot dog eating contest in Coney Island, New York is an annual event where the hot dog gets to shine.

On the Fourth of July, Americans everywhere can char hot dogs on backyard grills. But thousands of others will celebrate American independence by watching contestants cram dozens of dogs down their throats in a few short minutes.

Broadcast on ESPN, the event is also a clever marketing strategy for a company known for a food that is falling out of fashion on restaurant menus.

Americans eat plenty of hot dogs, about 5.8 billion of them every year, according to industry research firm NPD. That is 17 dogs per person, per year.

But sales of hot dogs aren’t really growing that much. Other trends in the marketplace have overtaken its popularity, industry analysts say, and health concerns have threatened its reputation. In 2015, the World Health Organization linked the consumption of processed meats, including hot dogs, to cancer.

Hot dogs have also had to adapt to changes in consumer preferences away from potentially unhealthy or artificial ingredients in their foods. Nitrates and nitrites — chemicals traditionally used to preserve hot dogs, bacon, and other processed meats — fall into this group.

“Hot dogs are not doing fantastically over the last few years in retail,” said Megan Nelson, an analyst at market researcher Nielsen. She explained that consumers tend to put a “health halo” on foods they perceive as healthier, even if those foods contain as much fat, salt or sugar, as a more conventional counterparts.

“There has been this negativity in the market,” she said. “I think hot dogs have been hurt by that. We see that across the store, of highly processed foods not faring very well.”

Many scientists say the concerns over nitrates and nitrites are misplaced or overblown, but the industry has responded anyway, by marketing hot dogs that use the natural nitrates and nitrites present in celery juice and celery powder. This segment of “all natural” hot dogs makes up about 18% of all hot dog sales, but it grew at a rate of 3.3% in dollars during the 52 weeks ended mid-June 2019. Sales of conventional hot dogs grew at a rate of only 1.2% during that period.

“When we looked at our hot dog portfolio a couple of years ago, what we were hearing from consumers was that while people still love hot dogs, they were concerned about the ingredients and that was dragging on the category a little bit,” said Matt Riezman, associate director of marketing for Oscar Mayer at KraftHeinz.

“They were looking for shorter ingredient lines and fewer ingredients they didn’t understand.”

Oscar Mayer removed artificial preservatives and other ingredients that were tripping up their customers.

“The result we saw was super positive,” he said. “We saw consumer trust in our brand increase and we also saw our share of the hot dogs category increase as well.”

To keep the category alive and growing, some are turning to new flavors. Hebrew National, a more than 100-year-old kosher hot dog brand now owned by Conagra Brands, is trying out different cuts of meat for its hot dogs for novelty and variety.

“We talked during our investor day earlier this year about our brisket dog,” said Bob Nolan, senior vice president for data and analytics for Conagra Foods. Like competitors, Hebrew National also has an “all natural” hot dog, but other potential growth area in hot dogs that seize on consumer interest in trends such as charcuterie or barbecue.

The brisket dog is meant to resemble the fattier cuts of meat a customer might buy in a deli.

“The hot dog form is convenient, whether it is served in a bun or cut up in a meal,” he said. So we think that will stay the same. Where we think the innovation is going to be is in different flavors and cleaner versions.”