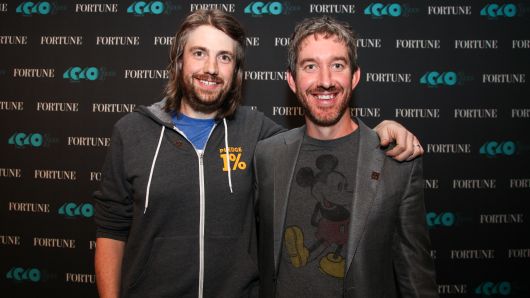 Mike Cannon-Brookes, left, and Scott Farquhar, co-founders and co-CEOs of Atlassian and 2016 honorees on Fortune’s 40 Under 40 list, pose for a photo in San Francisco on Oct. 13, 2016.

Atlassian shares jumped more than 5% to a record on Thursday, after analysts at Goldman Sachs raised their rating on the collaboration software company, citing the likelihood of better-than-expected financial performance.

The shares climbed as high as $124.27, giving Atlassian a market value of over $28 billion. The company, which was founded in Australia in 2002, has multiplied in value almost sixfold since its IPO in 2015.

The Goldman analysts, led by Heather Bellini, upgraded the stock to “buy” and increased their price target from $115 to $125 (which is less than $1 a way). They wrote that analysts’ consensus estimates for fourth-quarter billings of $361 million “appear conservative,” and they’re projecting the number to come in at $376 million, representing 34% growth from a year earlier.

Atlassian has raised the prices of its products in each of the last two fiscal years, and Goldman said it sees the company “retaining the ability” to do so “as it enhances product offerings.” Last year, Atlassian sold its HipChat messaging service to Slack in exchange for an investment in the company, which is going public soon.

Atlassian sells several products that are almost ubiquitous among developer teams, including tools for collaborating and for tracking software issues. It also has tools for announcing downtime for web services. The company competes in various ways with IBM, Microsoft, Salesforce and ServiceNow.

“Longer-term, we are generally positive on Atlassian’s ability to penetrate non-IT organizations, given the company’s low-friction online sales motion and strong established presence in collaboration,” the analysts wrote.

WATCH: Cramer: Why these stocks can give exposure to cloud-based collaboration space