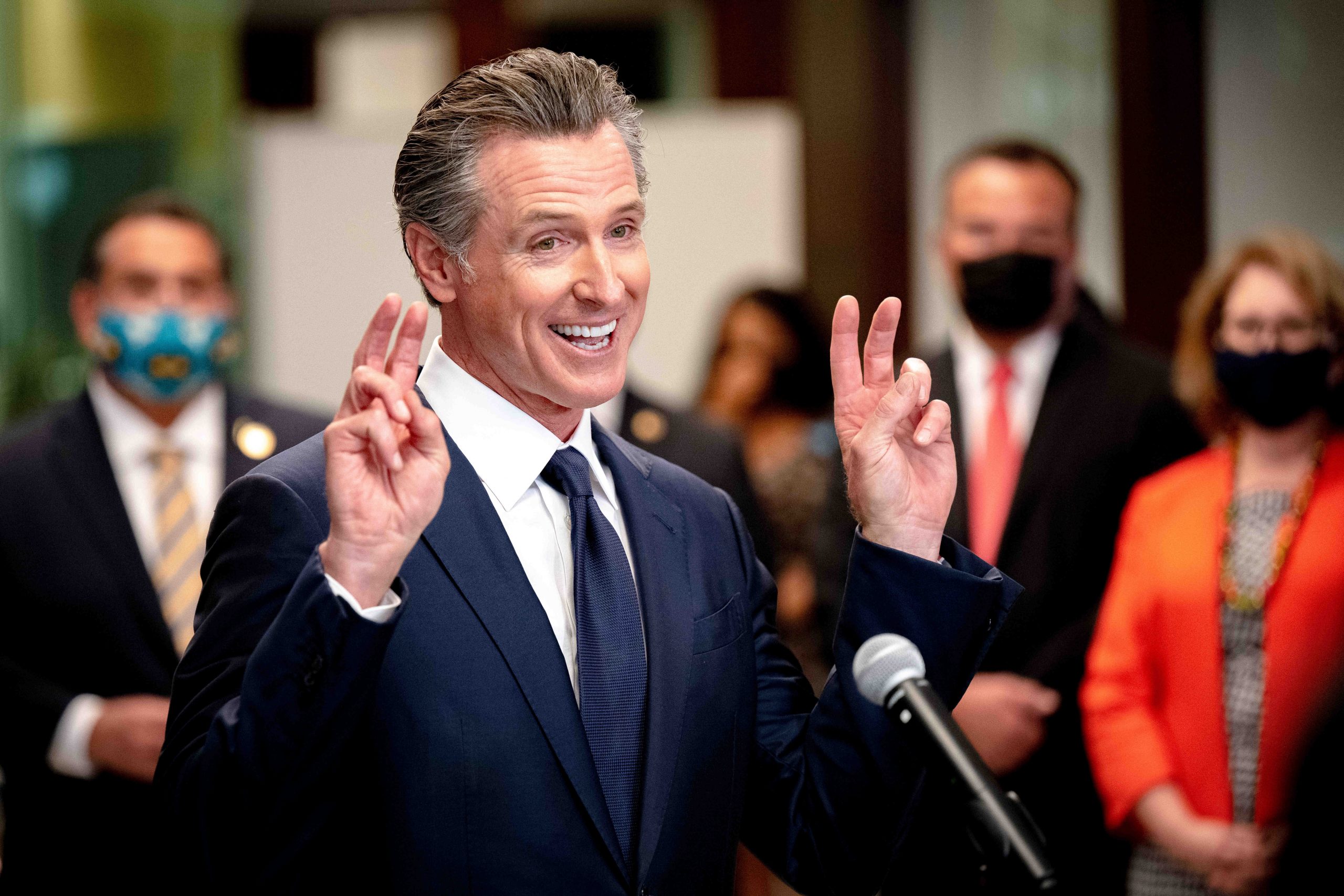 California Gov. Gavin Newsom makes a gesture as he speaks during a news conference at San Bernardino Unified School District Office after visiting Juanita B. Jones Elementary School in San Bernardino on Friday, Aug. 6, 2021.Watchara Phomicinda | MediaNews Group | Getty ImagesThe campaign to recall California Gov. Gavin Newsom lost so much momentum in the past month that bettors now say there’s over an 85% chance that the effort fails.According to political betting website PredictIt, the Democrat’s odds of staying in office after the recall election on Sept. 14, reached their highest mark last week since early July.On Thursday, a bet on a successful recall (meaning a wager that Newsom would be ousted) cost 10 cents on PredictIt, down from 26 cents a week earlier and a high of 34 cents in early August. As of Sunday, the price had risen slightly to 14 cents.Correct bets on PredictIt redeem at $1, so a wager at 10 cents would earn 90 cents should the recall prevail. The price of a bet in favor of a recall hasn’t closed below 10 cents since May 20, according to PredictIt. The low of the campaign was 8 cents, a few days earlier in May.Newsom and the Democratic Party have sought to make up ground as polling has shown higher GOP enthusiasm for voting in the recall, even though California is a reliably blue state. The California governor has gotten boosts from celebrities and high-profile politicians such as Sen. Elizabeth Warren, D-Mass. Democrats are returning early voting ballots at a much larger rate than Republicans.Vice President Kamala Harris, the former California attorney general and an ex-U.S. senator from the state, is set to campaign with Newsom this week. President Joe Biden, who’s contending with low polling himself after a troubled military exit from Afghanistan and rising Covid-19 infections across much of the U.S., has said he would campaign for Newsom.The governor’s rosier outlook in recent days is reflected in the polls. FiveThirtyEight’s polling average shows Newsom with an edge of 10.4 percentage points over the pro-recall effort (53% to 42.6%), up from 5.6 points at the end of August. A poll last week from the Public Policy Institute of California said that 58% of likely voters would vote against the recall.The recall effort gained momentum during the Covid pandemic as critics of the state’s aggressive lockdowns, school closures and rising crime voiced their discontent. Some businesses and wealthy tech executives and investors also left California and headed for states with lower tax rates.Newsom handed his opponents a gift in November. With the pandemic still raging and businesses closed, photos surfaced of an unmasked Newsom attending a party at the high-end restaurant French Laundry in the Napa Valley. By April of this year, the recall had acquired 1.6 million signatures, surpassing the number needed to trigger an election.Newsom supporters have reeled in cash and flooded the California airwaves of late to try and fend off the challenge. Opponents of the recall have raised $68.9 million, or six times as much as the amount pulled in by the pro-recall side, according to CALmatters.Should more than half of voters say “yes” to the recall, the next governor will be whomever of the 46 replacement candidates gets the most votes on the second part of the ballot.The betting markets don’t have much confidence in any of them.Bets on Larry Elder, a conservative radio talk show host, have fallen to 13 cents from 25 cents on Aug. 24. A bet on YouTube star and real estate entrepreneur Kevin Paffrath, who’s running as a Democrat, costs 4 cents, down from 13 cents in mid-August. None of the other candidates are over 1 cent.A wager on Newsom to keep the gig fell as low as 68 cents in early August. It now sells for 89 cents.WATCH: California Gov. Newsom faces recall as organizers submit signatures

Pfizer Covid booster shots will likely be ready Sept. 20, but Moderna may be delayed, Fauci says
Singapore pivots to living with Covid, refrains from tightening measures even as cases rise
To Top
error: Content is protected !!
Top