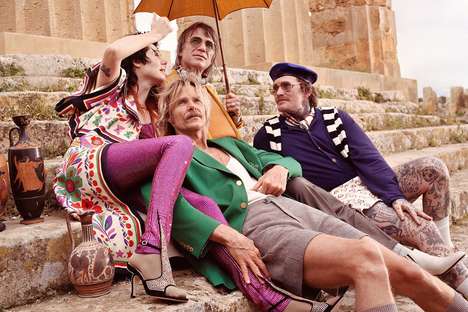 The Gucci Pre-Fall 2019 campaign has been unveiled by the fashion house as its latest photography lineup that seeks to put a number of different aesthetics in juxtaposition to one another to surprise and delight onlookers. The bohemian styles donned by the models in the campaign come as an eclectic contrast to the Selinunte Archaeological Park in Sicily where the shoot was located.

Art direction for the shoot was done by Christopher Simmonds, while punk band Surfbort makes an appearance as models in the brand’s latest designs. The Gucci Pre-Fall 2019 campaign was explained by the brand on Instagram where it said, “In [Selinunte Archaeological Park] dating back to the 7th century BC is [Michele’s] contemporary take on the classical symposium — an after-banquet gathering with music and dancing, poetry recitals and long conversations.”