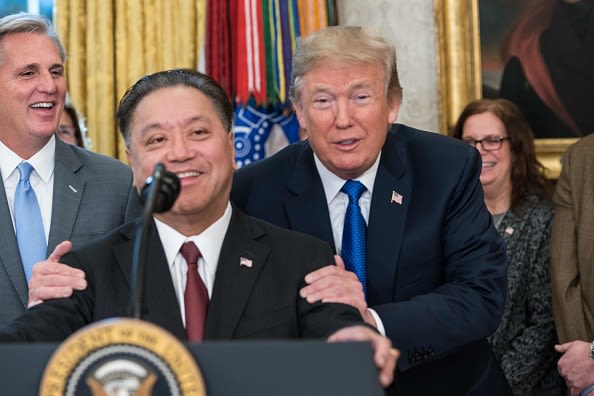 U.S. President Donald Trump jokes with Broadcom CEO Hock Tan as he announces that Broadcom would be moving back to the U.S. in the Oval Office at the White House in Washington on Nov. 2, 2017.

Chipmaker Broadcom formally announced its acquisition of Symantec’s enterprise business after the closing bell on Thursday. Broadcom is paying $10.7 billion in cash, according to a statement. Broadcom stock moved up 1% in-after-hours trading immediately following the announcement.

Symantec shares were up as much as 12% during Thursday’s trading session as investors awaited the news.

Speculation about a deal between the companies surfaced in early July, sending Symantec shares upward. Weeks later CNBC’s David Faber reported that talks between Broadcom and Symantec had ended, and shares of Symantec moved lower.

Broadcom has been on an acquisition run for years. It tried and ultimately failed to buy fellow chipmaker Qualcomm for more than $100 billion as President Donald Trump stepped in and blocked the deal. Following that outcome Broadcom sought out mainframe software company CA, paying almost $19 billion.

The CA deal has helped Broadcom diversify its business. Broadcom cut its revenue guidance in June as one of its biggest customers, Huawei, saw the U.S. government impose limitations on how it could buy products from U.S. companies.

Symantec’s revenue declined 2% in its 2019 fiscal year, which ended on March 29. In May Symantec CEO Greg Clark stepped down, and director Richard Hill took over in the interim as the company said it was looking for a full-time replacement. Hill joined the board alongside Peter Feld of activist hedge fund Starboard Value and Dale Fuller as part of an agreement Symantec made with Starboard in September.

The Symantec enterprise business produced $2.3 billion in revenue in the 2019 fiscal year, or about half of the company’s total revenue. The segment sells software to help companies and governments detect attacks across devices and monitor the use of cloud services, among other things. Symantec’s enterprise competitors include Cisco, Crowdstrike, Microsoft, Palo Alto Networks and Zscaler.

“There is undoubtedly good that AVGO can do here; Symantec has been plagued by turnover, accounting restatements, & execution issues, and better more focused leadership could likely do it well,” Bernstein Research analysts led by Stacy Rasgon wrote in a note distributed to clients on Thursday before the deal was announced.

Executives will discuss the deal on a conference call at 5 p.m. Eastern time.

WATCH: Cramer: Symantec is worth a second look with Starboard Value involved