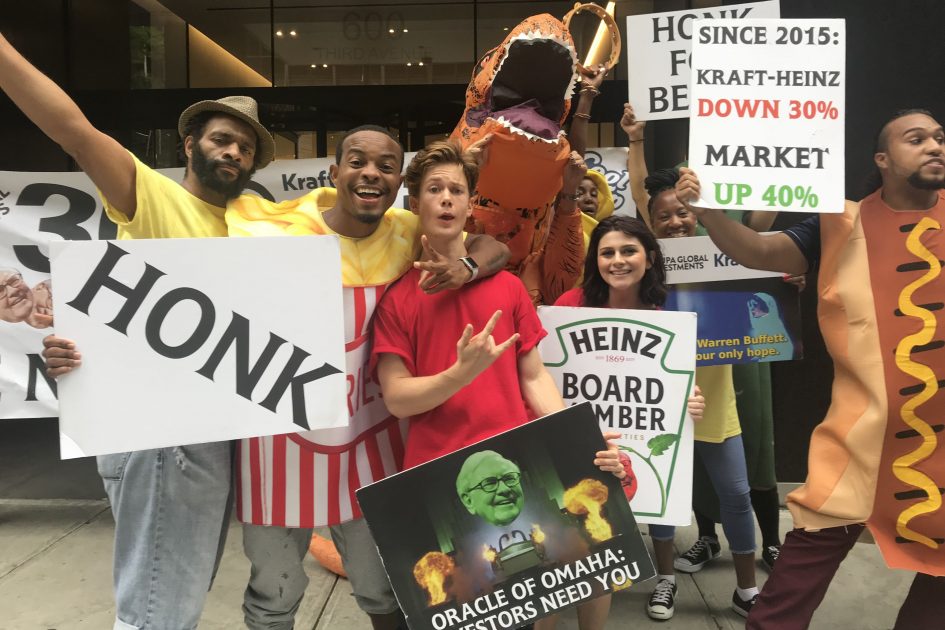 Protestors outside 3G Capital’s office, angry about its performance

For Kraft Heinz investors, their main worry can be summed up in one sentence uttered by its CEO on Thursday.

Ahead of the call, Kraft Heinz announced its net income in the first half of the year was half the size it was in the same period a year ago. Profits were weighed down by another round of impairment charges — $1.2 billion to write down the value of business units and brands like Velveeta and Cool Whip. Before Patricio joined Kraft Heinz in April, the company had written down the value of its two of its biggest brands, Kraft and Oscar Mayer, by $15 billion.

But the warning that more could be ahead, sent Kraft Heinz’s already beaten up stock to its lowest levels yet, an all-time low of $26.05.

Patricio, a former chief marketing officer at Anheuser-Busch InBev, brought the promise that his brand-building skills would revive growth. But he admitted on Thursday he didn’t have enough clarity yet to provide financial guidance.

“We have a big agenda to build … But I think that working on targets will not help. But second since I’ve been here just for 40 days, I wouldn’t feel comfortable about [giving] a guidance that I still do not have the necessary confidence about that number.”

The refusal to provide a forecast frustrated analysts who had gone six months without a quarterly filing, and hoped they would finally have insight into how the company expects to regain its footing. Kraft Heinz’s shares have fallen nearly 30% year-to-date, as sales have stalled and profit has crumbled. Its filings have been delayed amid a Securities and Exchange Commission investigation into its accounting and procurement practices.

The aversion to targets, meantime, surprised some industry insiders, who remarked that the company’s backers, 3G Capital, developed a reputation for intense focus on numbers and a target-based compensation system that helps it achieve its aggressive goals.

Now, without any guidance, investors and analysts alike are left wondering what the true value of Kraft Heinz’s brands are, and how much farther those values might fall.

The company’s portfolio is hodgepodge of processed food brands that are out of touch with today’s consumers: Oscar Mayer, Velveeta, Planters and Jell-O. Its business is largely restricted to the U.S. at a time most companies, like Mondelez, are finding growth internationally, where there is more appetite for their food, and less pressure from grocers.

And growing brands has not historically been a focus of the company’s backers, 3G Capital, which together with Warren Buffett’s Berkshire Hathaway created Kraft Heinz in 2015. Instead, 3G’s approach has been to slash costs of a slow-growing company and use those savings to buy the next company.

In combining Kraft and with Heinz Foods, which 3G and Berkshire had acquired years prior, the partners saw a chance to duplicate that strategy. But as opportunity for acquisitions has run dry, 3G has been tasked with the unexpected job of running a food company for top-line growth.

That’s a challenge with which food companies from Campbell Soup to General Mills have struggled. Smaller upstart brands are nipping at their heels, and the trends change faster than big food companies can react. But, in addition to its historical focus on cost-cutting, Kraft Heinz has the burden of owning brands that are particularly vulnerable to cheaper, private-label competitors.

…Our more urgent priority is to get the organization fixated on our consumers and customers and in this process ensure we don’t rush to give away potential value to others.

Many of those vulnerable brands, like Maxwell House, Miracle Whip and Oscar Mayer, were already under pressure when 3G and Berkshire led the 2015 deal. Kraft Foods was the result of a 2012 spin, in which it carved out its faster growing international snacks business into a new company, Mondelez. In perhaps a hint of what was to come for Kraft Foods, its then-CEO, Irene Rosenfeld, went on to lead the new company, rather than staying behind to lead Kraft.

Buffett earlier this year told CNBC he “overpaid” for Kraft — but not Heinz.

It seems both Buffett and 3G are continuing to pay for that mistake. Kraft Heinz earlier this year tried to sell a number of its weaker brands, most of which came from Kraft Foods: Breakstone’s sour cream and cottage cheese, Plasmon baby food and Maxwell House coffee.

But after tepid interest, it has pulled the sale of Breakstone’s and Plasmon. It is still hoping to sell Maxwell House, but has faced significant push-back, CNBC has reported. Maxwell House was among the brands that Kraft Heinz disclosed it was writing down on Thursday, along with Miracle Whip, Velveeta, Lunchables, Philadelphia and Cool Whip brands.

Amid the uncertainty, the potential sale of its Ore-Ida frozen potato business on the back burner.

‘No quick or easy solutions’

With those sales on hold, the company is at risk of a downgrade, say some analysts. It is levered at roughly four times EBITDA and has $3 billion of debt coming due in 2020, which may have to be refinanced.

“I want us to spend more time evaluating the questions of divestitures,” Patricio told analysts Thursday morning. “We absolutely remain committed to our investment-grade credit rating, but our more urgent priority is to get the organization fixated on our consumers and customers and in this process ensure we don’t rush to give away potential value to others.”

Finding value may be a tough path, particularly as the company now must also manage its cash flow.

Patricio said on Thursday Kraft Heinz will provide “strong consistent investments” in the company’s brands, in contrast with its prior strategy. He is hoping to push further to appeal to Hispanics, a community he said the company doesn’t “even communicate” with. Kraft Heinz will also look to improve its innovation.

Analysts, though, remained largely unconvinced, noting those tactics were similar to the ones employed by Kraft Foods before it was merged with Heinz and put under 3G’s cost-cutting machine.

“All of these have been key pillars of prior business plans at Kraft for decades. That these ideas are in vogue again suggests there are no quick or easy solutions in the competitive food space, and it may suggest that operating margins could revert closer to prior levels, as well, in order to be sustainable, ” wrote analysts at Piper Jaffray.

And while some companies have been able to rejuvenate brands, like Conagra’s revival of its frozen food business, those efforts not always successful, even for companies with deep marketing expertise. Kellogg, for example, in the past two years sought to revive Special K through a brand relaunch, but has not yet seen the fruit of that labor.

Some of Kraft Heinz’s recent launches include a partnership with Oprah Winfrey and introducing “Kool Aid” Sour Jammers.