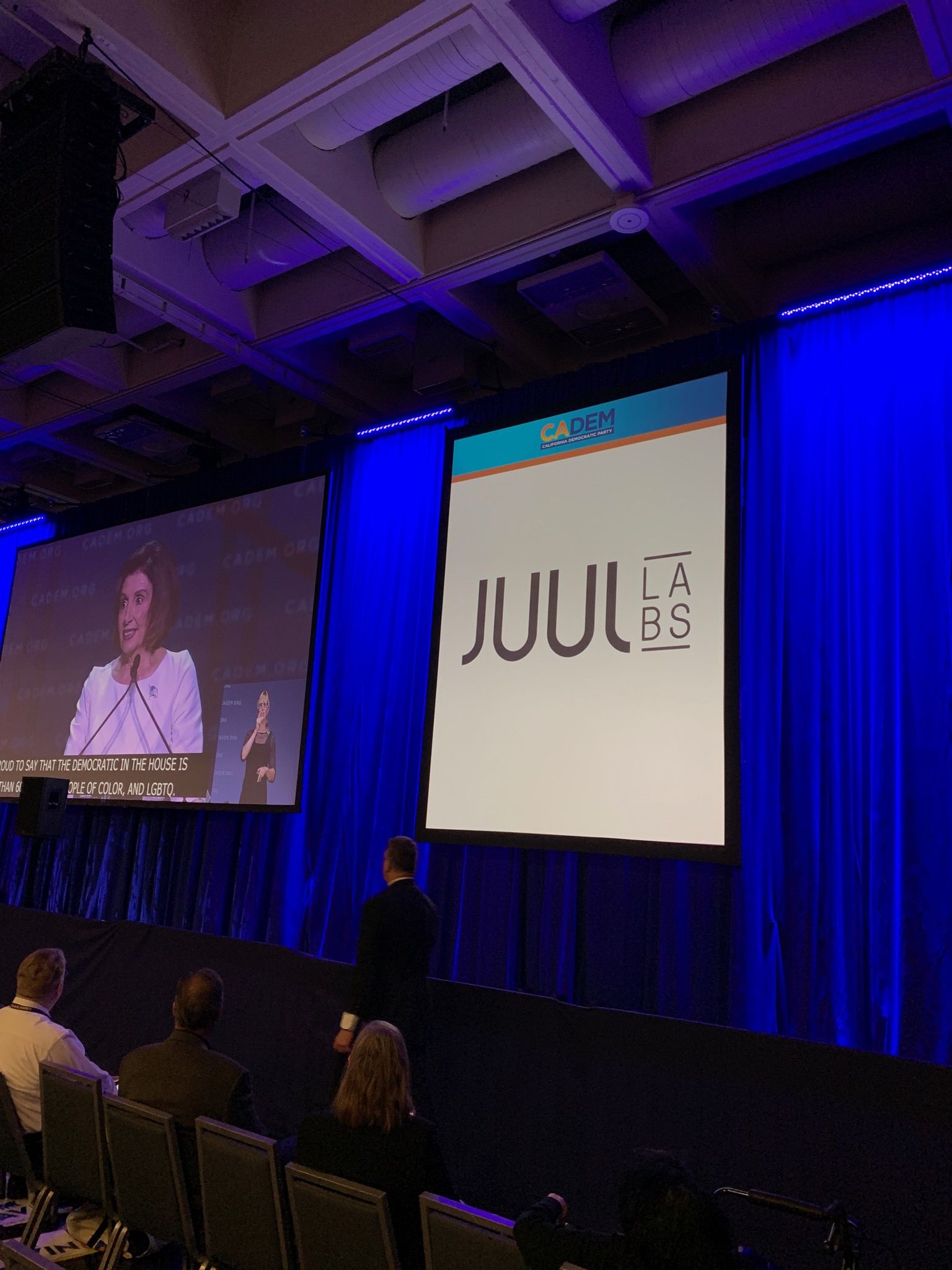 LOS ANGELES – When House Speaker Nancy Pelosi took the stage at the California Democratic convention on June 1, the logo from Juul Labs was displayed prominently behind her.

Within a week, U.S. House Democrats would demand reams of internal documents from the e-cigarette maker as part of a broader probe into the teen vaping epidemic. House Oversight Subcommittee on Economic and Consumer Policy Chairman Rep. Raja Krishnamoorthi, D-Ill., is scrutinizing the company’s social media practices and marketing to underage users, according to the June 7 letter sent to Juul CEO Kevin Burns.

“The safety and well-being of America’s youth is not for sale,” Krishnamoorthi wrote. “I am extremely concerned about reports that Juul’s high nicotine content is fueling addiction and that frequent Juul use is sending kids across the country into rehab, some as young as 15.”

Juul was one of the party’s corporate sponsors at the California Democratic Party Convention from May 31 through June 2. During the three-day convention in San Francisco, logos from companies including Juul, Airbnb and Uber flashed on a screen as conventiongoers watched the party’s rising stars speak, including presidential hopeful Sen. Elizabeth Warren who signed on to a letter opening a Senate probe into Juul in April. Presidential contenders California Sen. Kamala Harris and former Rep. Beto O’Rourke also spoke at the convention.

The appearance of Juul as a donor upset some Democrats and health advocates who have waged battle against the vaping company. Juul is facing increased scrutiny over the company’s marketing practices as teen use reaches epidemic levels.

Many lawmakers and public health officials say the company’s marketing practices targeted minors through social media influencers, who are paid to promote products on Twitter, Instagram and Facebook. Critics also say Juul’s fruity pod flavors, which are now sold only online, targeted teens. House and Senate lawmakers are also looking at Altria’s $12.8 billion investment in Juul last year, which gave the tobacco giant a 35% stake in the vaping company.

“If Democrats are going to position themselves as a party that stands up for the public against big special interests, they can’t be taking money from the biggest purveyor of nicotine addiction to kids,” said Dr. Stanton Glantz, University of California at San Francisco’s director of its Center for Tobacco Control Research and Education. “They can’t talk out of both sides of their mouth.”

State Sen. Jerry Hill of San Mateo said he was shocked to see the Juul logo across the screen on the main stage.

“It was disturbing, disappointing and disgusting. Those are the three words that came to mind,” he said.

“It’s giving the impression that the Democratic Party supports this company. It was disappointing because the party of the people would stoop this low for money. And it was disgusting because we know that the company is addicting a future generation.”

“I would prefer that our party not take sponsorship money or give promotional space to a company that preys on young smokers to hook them on nicotine,” said Glazer.

The tobacco legislation, Senate Bill 38, was pulled by Hill last month after “hostile amendments” were added.

A variety of tobacco industry players opposed the legislation, including Juul and the Cigar Association of America, according to a Senate-prepared summary of the legislation.

“Juul has become super active politically,” said Glantz, a UCSF professor of medicine. He said the rise has come as jurisdictions look to crack down on vaping use, including Juul’s hometown of San Francisco.

Last year, voters there approved a ban on the sale of flavored tobacco products despite the industry waging a $12 million battle to stop it. Juul also is behind an initiative petition drive to overturn the flavor ban.

“We have grown our California team to engage with lawmakers, regulators, public health officials and advocates to drive awareness that JUUL exists to help adult smokers switch and is committed to keeping JUUL products out of the hands of underage people,” a company spokesperson said via email.

One state party official, though, took to the microphone on the final day of the convention to criticize the decision to take money from Juul.

“What committee should I go to to ask this party not to take any money from Juul, who preys on children?” asked Hene Kelly, a Democratic Party director representing the San Francisco region.