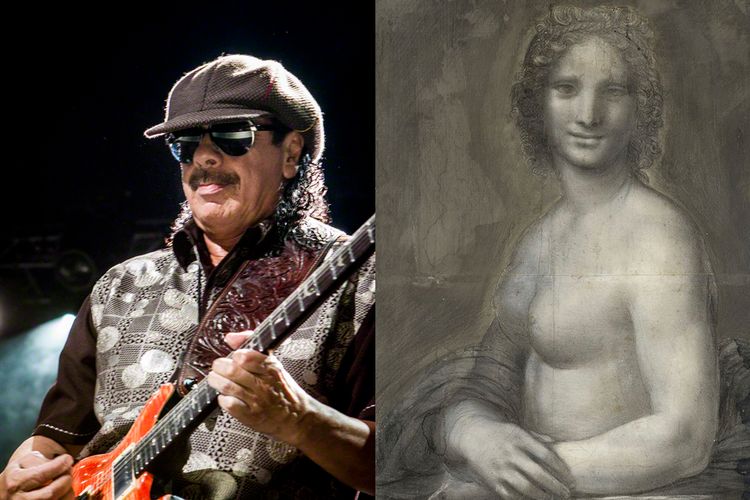 Carlos Santana, the Mexican guitarist and song-writer, had never been to the Louvre until 2016, when he stood in the queue among Japanese tourists to see the Mona Lisa and had a kind of mystical experience in front of her. He heard her speak to him.

He went home and wrote a series of songs in her honour (the EP In search of Mona Lisa was issued in January this year). The first contains the words “All the women of the world/ Ain’t got nothin’ on her/When I stood in front of her/Lookin’ eye to eye/She said to me/Do you remember/When we were lovers”.

Four months later, as he told Rolling Stone magazine, she came to him again in a dream and this led to his writing “Do you remember me?”, a long piece with weeping notes on the guitar in which he sings of her as a goddess, whom he venerates as though she were the Virgin Mary until the last line, when he says he wants to see her naked. Here it is, with the original Spanish translated:

“Mujer Woman /Eres mi diosa You are my goddess/Aspiro rezar I long to pray/En tu altar At your altar/ Te traigo flores I bring flowers/ Prendo tus velas I light your candles/ Enciendo incienso I burn incense/ Tomo tu vino I drink your wine/ Te canto canciones I sing you songs/ Para adorarte To adore you/ Te ofrezco mi luz I offer you my light/ Pa’ que te desnudes/For you to disrobe.”

What will Santana make of the drawing called the “Nude Mona Lisa”, on show at Chantilly near Paris from 1 June to 6 October? My guess is, he will hang on to his dream because, with its beefy arms and smug, self-conscious expression, it is wholly lacking in the allure of the Mona Lisa herself.

Santana is, of course, not the first to feel the mystery of the Louvre’s painting and put pen to paper. Back in 1873, the Oxford academic Walter Pater, Oscar Wilde’s tutor, wrote these famous, which did much to contribute to the painting’s fame over the years:

“She is older than the rocks among which she sits; like the vampire, she has been dead many times, and learned the secrets of the grave; and has been a diver in deep seas, and keeps their fallen day about her; and trafficked for strange webs with Eastern merchants”.

Such heady writing seems fanciful and affected nowadays. We may prefer Santana’s straightforwardly sensual lyrics and, at the very least, he has added to the tiny repertoire of popular songs dedicated to works of art, the only other being Don McLean’s Starry, Starry night of 1976 about the famous painting by Van Gogh in the Museum of Modern Art, New York.

Ursula Hauser’s collection goes on show in Somerset
Petra’s rich heritage goes on show for all to see in new museum
To Top
error: Content is protected !!
Top