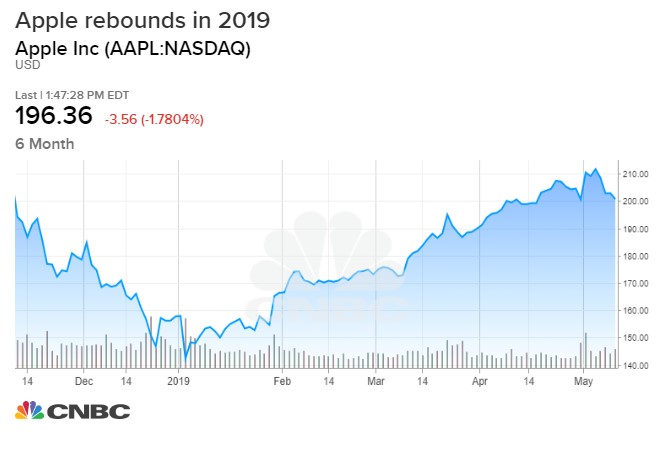 In response, Apple’s stock fell sharply in January. But in the months since, Apple’s stock roared back. At the beginning of May, Apple was up nearly 35% for the year. When Apple reported strong first quarter earnings at the end of April, Cook pointed to an uptick in the company’s China prospects as a main driver. The CEO also told CNBC that part of the company’s strength in China was due to progress made by Trump’s administration in trade negotiations.

“I believe that the trade relationship — I don’t mean the tariff, I mean the tone — is much better today than it was in the November-December time frame. That affects consumer confidence in a positive way,” Cook said on April 30.

But that improved tone dissipated over the past week and with it some of Apple’s stock gain.

“Apple has one of the most significant exposures to Chinese exports to the US” among technology companies, Morgan Stanley said in a note.

But despite Apple’s reliance on Chinese labor and manufacturing, the increased tariffs are unlikely to cause Apple to begin a large scale move out of the country.

So far for Apple, the impact from tariffs placed on roughly $250B of goods exported from China to the US to-date … has been minimal, so an increase in the tariff rate … likely would still be minimal,” Morgan Stanley said.