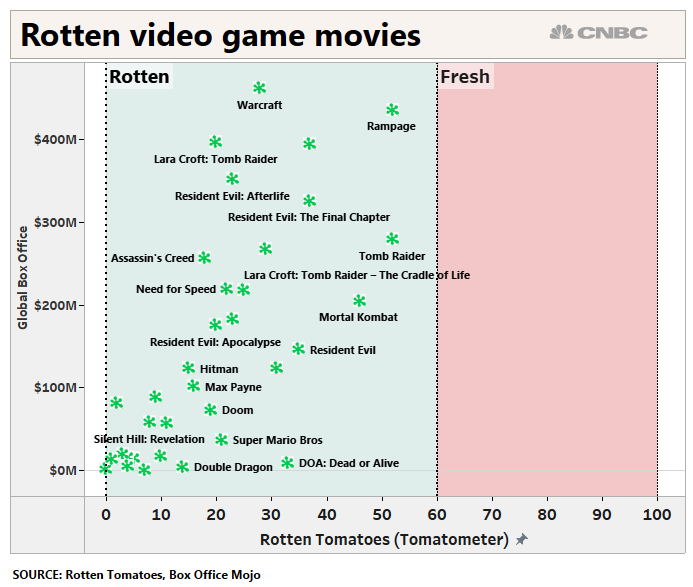 In the early ’90s Hollywood decided to finally capitalize on the success of video games by turning them into feature-length films. Unfortunately, there has always seemed to be something lost in translation between the game controller and the theater.

And that seems to be the case with Warner Bros. “Detective Pikachu,” as well.

While the Pokemon film is the first and only video game film adaption to ever hold a “fresh” rating on Rotten Tomatoes — it’s currently at 64% — it’s clear that Hollywood still hasn’t mastered transitioning popular video game titles into box office blockbusters.

Critics praised “Detective Pikachu,” which opens Friday, for its visuals — cute, furry and CGI iterations of popular Pokemon creatures — but criticized it for poor storytelling.

“All this world-building and attention to detail is ultimately in service of a story that’s borderline incoherent,” Alan Zilberman, of the Washington City Paper, wrote in his review of the film.

The film follows Tim Goodman, a young man looking for his father who has mysteriously gone missing. Tim is aided on his search by Detective Pikachu, a wise-cracking Pokemon voiced by Ryan Reynolds (“Deadpool”). The pair chase clues through Ryme City, a metropolis where humans and Pokemon creatives live in tandem. During their journey, they uncover a secret that could destroy the peaceful co-existence between the Pokemon and humans.

Fans who have seen the film seem to have enjoyed it. So far, 87% of audience members say they liked the film, according more than 350 user ratings on Rotten Tomatoes.

“Like most games that have been turned into movies, it’s less fun to watch than it is to play,” Todd Jorgenson wrote in his review for Cinemalogue.

There are nearly 40 films on Rotten Tomatoes that are categorized as live-action video game adaptations. Every single one of them has failed to achieve a fresh rating.

“In Hollywood, video game adaptations have routinely carried a dirty connotation, which isn’t surprising given the level of epic failure the genre has endured since inception,” Jeff Bock, senior box-office analyst at Exhibitor Relations, said.

The Rotten Tomato rating has become a benchmark for movies over the last two decades. Rotten Tomatoes’ website is often consulted by moviegoers before they decide to go see a film. The company aggregates reviews from major publications and reputable blogs and determines what percentage of those reviews were positive versus negative.

If at least 60% of a film’s reviews are positive, it will receive a red tomato, and be considered “fresh.” If it is less than 60%, it is given a green splat. In order to be considered “certified fresh” at least 75% of a movie’s reviews must be positive.

2018 had two video game films that came close to achieving the benchmark — “Tomb Raider” and “Rampage.” These two adaptations each earned 52% ratings on Rotten Tomatoes.

“The reason studios keep going back to this pitfall of pixels is that, quite simply, the potential is massive,” Bock said. “If just one of these IPs break out, any studio in town could potentially reap the benefits of a massive franchise a la “Transformers” or “Resident Evil,” which, to date, is really the only video game adaptation to create a box office legacy. Problem is, most of the scripts associated with video game adaptations are contrived, if not straight up ridiculously mishandled.”

Over the course of seven films, the “Resident Evil” franchise has earned $1.2 billion at the global box office. For comparison, “Avengers: Endgame” made that figure in a single weekend. The films have been widely panned by critics, each earning a score between 20% and 37% on Rotten Tomatoes.

Currently, the most successful video game adaptation at the box office is “Warcraft,” based on the World of Warcraft online game. It hauled in $433.6 million in 2016, but has a 28% rating on Rotten Tomatoes.

“Video game movies have struggled in large part because something tends to be lost in translation from one medium to the other,” Shawn Robbins, chief analyst at Boxoffice.com, said. “Sometimes it’s been an over-reliance upon game play elements while lacking proper world-building or character development, and at other times it’s been a complete deviation from the spirit that barely resembled what people love about the games.”

“It’s a tightrope that Hollywood has tried to walk for decades now, but ‘Detective Pikachu’ seems to have found a middle ground by learning from some of those mistakes and still offering something fresh for both dedicated fans and uninitiated moviegoers,” Robbins said.