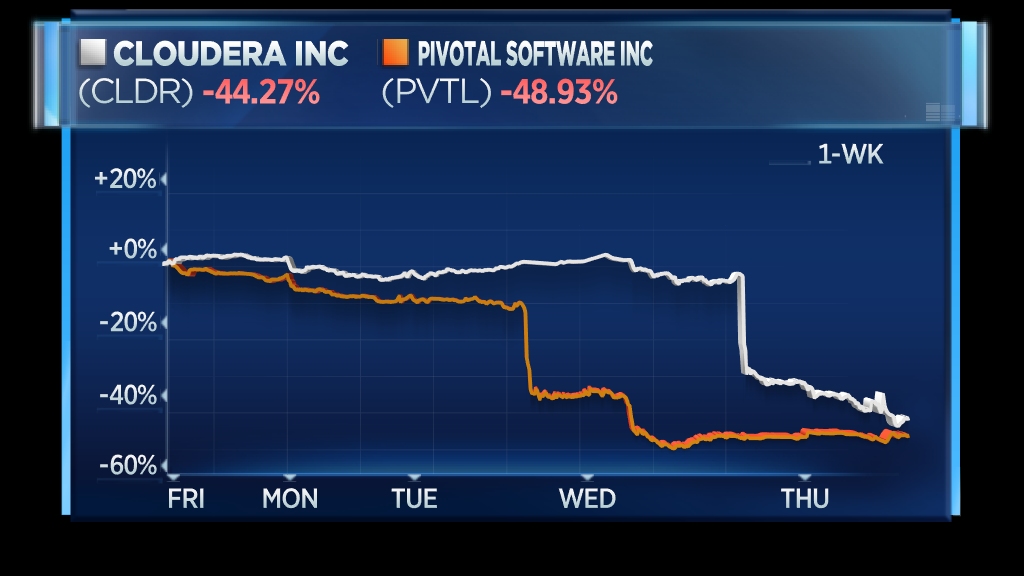 Cloudera shares plunged 43% on Thursday after the company announcement that CEO Tom Reilly is leaving and lowered its 2020 revenue forecast.

Five months after merging with top rival Hortonworks, Cloudera continues to bleed cash and is struggling to generate consistent growth, raising concerns about the future viability of its data analytics technology. The company, valued at $4.1 billion in a 2014 financing round led by Intel, is now worth just $1.4 billion, even with the addition of Hortonworks.

Analysts at D.A. Davidson called it a “disastrous quarter” and Wedbush cited the “dreaded trifecta of bad news” — weak results, bad guidance and the CEO departure.

“Last night will be the straw that broke the camel’s back for many investors and core believers in the Cloudera story,” wrote Daniel Ives, an analyst at Wedbush. He maintained his “neutral” rating and cut his price target to $7 from $16. The shares fell as low as $4.96 on Thursday, after closing the previous day at $8.80.

It’s the second straight day that an emerging tech infrastructure company has lost almost half its value. Pivotal Software, which sells subscriptions for software that’s designed to help companies deploy applications across multiple clouds, plunged 41% on Wednesday after lowering its full-year forecast.

For Cloudera, the fundamental challenge is the same that it’s been for years, which is that it’s trying to make money selling an advanced version of free open-source software called Hadoop, a platform for storing and processing large amounts of complex and disparate data. The merger with Hortonworks in January was designed to pull together sales and marketing resources and cut down on costs the companies were spending to compete with one another.

But the business remains a struggle. Another competitor, MapR, said last month that its laying off employees and may shut down if it can’t find funding.

When asked about MapR on Wednesday, Reilly told analysts that “we view their customer base as an opportunity for us and it is part of our growing pipeline.” He added that the Hortonworks combination led to a period of uncertainty and, during that period, Cloudera saw increased competition from cloud providers.

Its pipeline isn’t materializing fast enough for investors. Cloudera said it expects revenue for the full fiscal 2020 year of between $745 million and $765 million, down from a previous projection of $835 million to $855 million. Net loss will be 28 cents to 32 cents a share, the company said.

Reilly is being replaced on a temporary basis by board member Martin Cole, a former Accenture executive, as Cloudera kicks off a search for a permanent CEO.

“Tom and the Board have always been committed to continually evaluating Cloudera’s progress and ensuring that we are executing to drive long-term value. Accordingly, we have mutually agreed with Tom that this is the right time for a leadership transition,” Cole said in a statement.