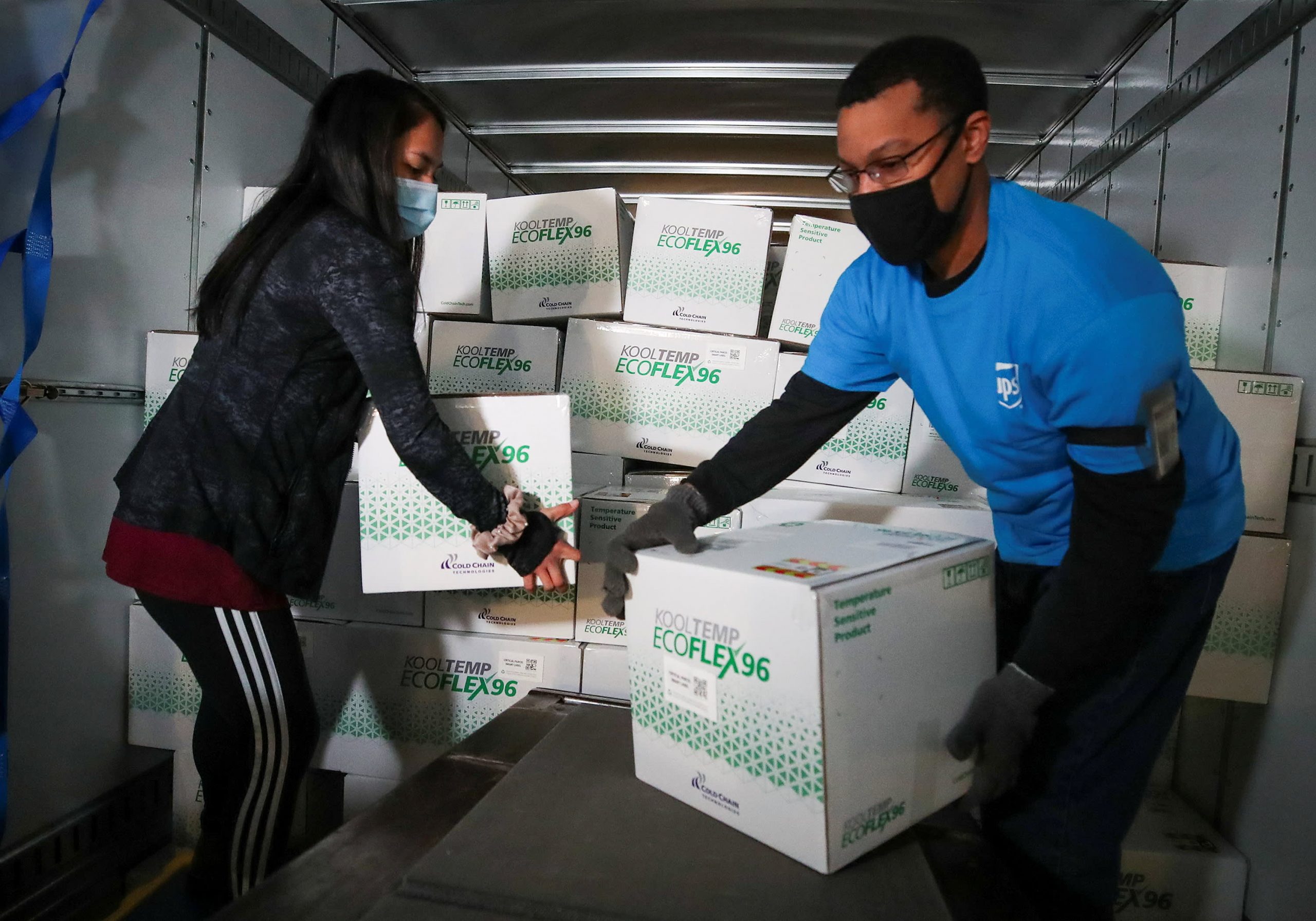 UPS package handlers Jesirae Elzey and Demeatres Ralston unload boxes of Moderna’s COVID-19 vaccine as it arrives at UPS Worldport, in Louisville, Kentucky, December 20, 2020.Michael Clevenger | Pool | ReutersCoronavirus vaccine distribution has been slower than U.S. officials hoped, as the number of immunizations remains far below the U.S. government’s goal of 20 million by the end of the year, federal health officials said Wednesday.Just over 1 million people in the U.S. have received their first dose of a coronavirus vaccine as of Wednesday morning, according to the Centers for Disease Control and Prevention. That’s roughly 19 million doses shy of earlier projections for December and leaves public officials a little more than a week — about 8 days — to try to close that gap. “Exactly how fast the ramp-up of immunizations, shots in arms, is slower than we thought it would be,” President Donald Trump’s coronavirus vaccine czar, Dr. Moncef Slaoui, told reporters during a press briefing Wednesday afternoon. “And as I told you earlier, we’re here to help the states to accelerate appropriately,” he said, adding the goal of 20 million vaccinations is “unlikely to be met.”U.S. officials said they are still working out some kinks in the distribution system after some deliveries of doses went to the wrong destinations and others went out on the wrong day.Army Gen. Gustave Perna, who oversees logistics for Operation Warp Speed, said the U.S. government has done a “good job so far” of distributing millions of Covid vaccine doses from Pfizer and Moderna to states, territories and major cities across the nation. But he added U.S. officials are still “learning,” with the distribution process getting “better” and “stronger” each day.”We have had a handful of packages that we tried to deliver that were not destined for the right place, but we captured them before they were dropped off and we rerouted them to the right place,” Perna said at the press briefing. “And we had a couple of … shipments that did not go out on the right day.”This isn’t the first hiccup since distribution began. Perna said last week several thousand doses of Pfizer’s vaccine traveling to California and Alabama had to be quarantined and returned to the company after the vials somehow got too cold. It’s unclear what caused the temperature to fall, but Pfizer said in a statement that it was able to intercept the shipments and “seamlessly trigger resupply to be delivered to those customers.”Global health experts had said distributing the vaccines to some 331 million Americans in a matter of months could prove to be much more complicated and more chaotic than originally thought. Besides manufacturing enough doses, states and territories also need enough needles, syringes and bottles to complete the vaccinations. People must also be trained on how to store and administer the vaccines. Pfizer’s vaccine, for example, requires a storage temperature of minus 94 degrees Fahrenheit.Despite the missteps, CDC Director Robert Redfield on Wednesday praised the U.S. milestone of 1 million vaccinations, calling it an “achievement” as the vaccine protection will help front-line health-care workers as they continue to treat sick patients.”While we celebrate this historic milestone, we also acknowledge the challenging path ahead,” he said in a statement. “There is currently a limited supply of COVID-19 vaccine in the U.S., but supply will increase in the weeks and months to come. The goal is for everyone to be able to easily get vaccinated against COVID-19 as soon as large enough quantities are available.”Perna said Wednesday he expects the distribution of the vaccines to improve, with more than 7,800 deliveries expected to be completed by the end of Thursday. The U.S. plans to ship 2.67 million doses of Pfizer’s vaccine and 2 million doses of Moderna’s vaccine to states next week, Perna said. The government distributed 2 million doses of Pfizer’s vaccine and 5.9 million doses of Moderna’s vaccine this week. A total of 15.5 million vaccines have been allocated, he said.

New warnings of a Covid ‘Christmas wave and New Year’s wave in January’
The plant-based meat industry has grown into a $20 billion business — but challenges remain
To Top
error: Content is protected !!
Top