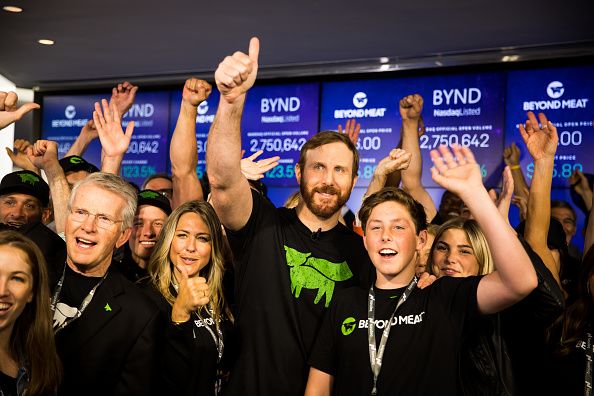 CNBC’s Jim Cramer on Friday applauded the quarterly results that Beyond Meat and Zoom Video — two stocks he has been skeptical about — posted Thursday as “things of beauty.”

The newly-public companies saw their stocks rally by double-digits after beating Wall Street expectations in their first earnings reports since their recent IPOs. Zoom spiked more than 18% and Beyond Meat catapulted nearly 40% during Friday’s session.

“I say two cheers for Zoom and Beyond Meat,” the “Mad Money” host said. “They may be too rich now, but they made you rich if you stuck with them.”

Since listing on the Nasdaq in early May, Beyond Meat’s stock is now worth less than $139 — nearly six times its debut price. The faux meat company, which produces plant-based burgers, reported $40.2 million in revenue for the quarter — Wall Street expected less than $39 million — and boosted gross profit margin by more than 1,000 basis points year-over-year.

Beyond Meat has vegan burger competition in the privately-held Impossible and Nestle, but Beyond has potential deals in the works with fast food chains, Cramer said. Competitors in the vegan burger space, according to Beyond Meat’s management, have made some missteps and given the company a head start, Cramer added.

“They’re adamant that they make a better burger, and they believe that there’s still a ton of room to grow as the meatless category is still just at 2% household penetration,” he said. “No wonder the stock exploded higher.”

Zoom’s share price has surged from its $36 April IPO to $94.05 as of Friday’s close. The video conferencing company delivered a big revenue beat in its first public report. The company reported about 7,700 new customers and four deals that will bring in more than $1 million each year, Cramer noted.

Zoom faces competition from Cisco, but Cramer highlighted that it landed a positive note from J.P. Morgan saying the quarterly results “underscore our confidence in Zoom as our favorite stock even with the current valuation level.”

With Zoom’s share price jumping more than 161%, and Beyond Meat’s nearly 455%, since going public, the host said “these stocks are absolutely trading at stratospheric levels … both could be easily imperiled.”

In the case of these two IPOs, however, Wall Street got it right and everybody wins, he said.

“I’ve been warning you for months that the recent flood of IPOs was creating a situation where we had a too much supply on hand, especially after the Uber deal, ” Cramer said. “But some of these deals really were fantastic for investors, and I wish I’d been more bullish about them.”