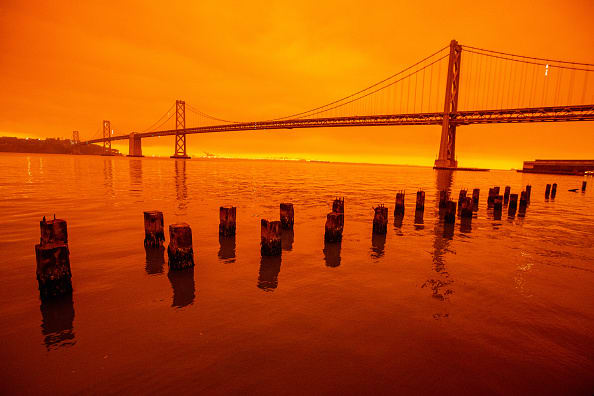 Wildfires fueled by extreme heat and high wind spread further across California, Oregon and Washington on Thursday, destroying hundreds of homes and killing at least seven people. Fires have burned through a record of at least 2.5 million acres in California, causing significantly worse destruction than last year’s devastating season. The August Complex that began last month is now the biggest wildfire in California’s recorded history, and six of the top 20 largest wildfires in state history have occurred this year, according to Cal Fire, the state’s fire agency. The blazes have also destroyed entire communities in Oregon, including Detroit in Marion County; Blue River and Vida in Lane County; and Phoenix and Talent in Jackson County. Fires also largely decimated the eastern Washington town of Malden over the weekend. An exterior view of the ballpark before the game between the San Francisco Giants and the Seattle Mariners at Oracle Park on September 09, 2020 in San Francisco, California.Lachlan Cunningham | Getty Images”This could be the greatest loss of human lives and property due to wildfire in our state’s history,” said Oregon Gov. Kate Brown. “We are not getting any relief from the weather conditions. Winds continue to feed these fires and push them into our towns and cities.”In Northern California, the major Bear Fire filled the skies with smoke and turned them an eerie dark yellow-orange, while the Creek Fire worsened in the Sierra National Forest. Three people were killed in the growing North Complex Fire in Northern California.A 1-year-old boy was killed in the Cold Springs Fire in Okanogan County, Washington, after the child and his parents tried to flee their home, according to the sheriff’s office.A NASA MODIS satellite image shows wildfires in Oregon, U.S. September 8, 2020. Picture taken September 8, 2020.Maxar Technologies | via ReutersIn Oregon, one person was killed near Ashland and two people were killed from fires in Marion County. The fires are becoming worse with forceful winds and heat. Climate change has triggered hotter temperatures and dry conditions that have sparked enormous wildfires in the fire-prone Western states.State and local officials are concerned that some people were unable to flee their homes that were burned down. “We also fear that this is not going to be the only folks we’ll find deceased up there,” Marion County Sheriff Joe Kast said Wednesday.Thousands of people in the Western states have had to evacuate their homes and don’t know when they’ll be able to return. As rescue efforts continue, the death toll from the fires is expected to rise over the next few days.Interstate 5 is seen in the background as the Bear Lakes Estates neighborhood is seen devastated in the aftermath of the Almeda fire in Phoenix, Oregon, U.S., September 9, 2020.Adrees Latif | Reuters