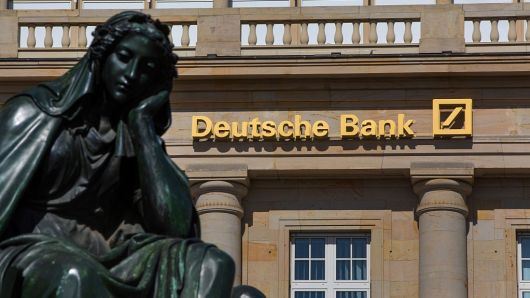 A signs stands above the entrance to a Deutsche Bank AG bank branch in Frankfurt, Germany, on Monday, July 4, 2016.

Germany’s flagship lender posted 201 million euros ($223 million) in net income for the first three months of the year. This was a rise of 67% from the same period a year ago and better than the 29 million euro figure given by Reuters in an analyst poll.

Revenues were down for the quarter by 9% but it said it was well on track to meet its 2019 adjusted cost target of 21.8 billion euros.

“Our first-quarter results demonstrate the strength of our franchise and our continued progress in executing our plans in a very challenging market environment,” CEO Christian Sewing said in statement.

“We have made progress on key business drivers: growth in loans and deposits, a recovery in assets under management and market share improvements in corporate finance.”

The figures come shortly after Deutsche Bank and Commerzbank formally ended merger talks, saying the deal would have been too risky. The bank also pre-released some of its expected first-quarter earnings on Thursday morning.

Its common equity tier-1 ratio, which indicates a bank’s strength, stood at 13.7% at the end of the first quarter.

In the past few years, Deutsche Bank has made headlines for all the wrong reasons — from settlements with the U.S. Department of Justice, to management reshuffles, weak earnings, constant restructuring and steep stock price falls.

Last year, the bank posted its first full-year net profit since 2014 but shares are still down more than 35% over a 12-month period.