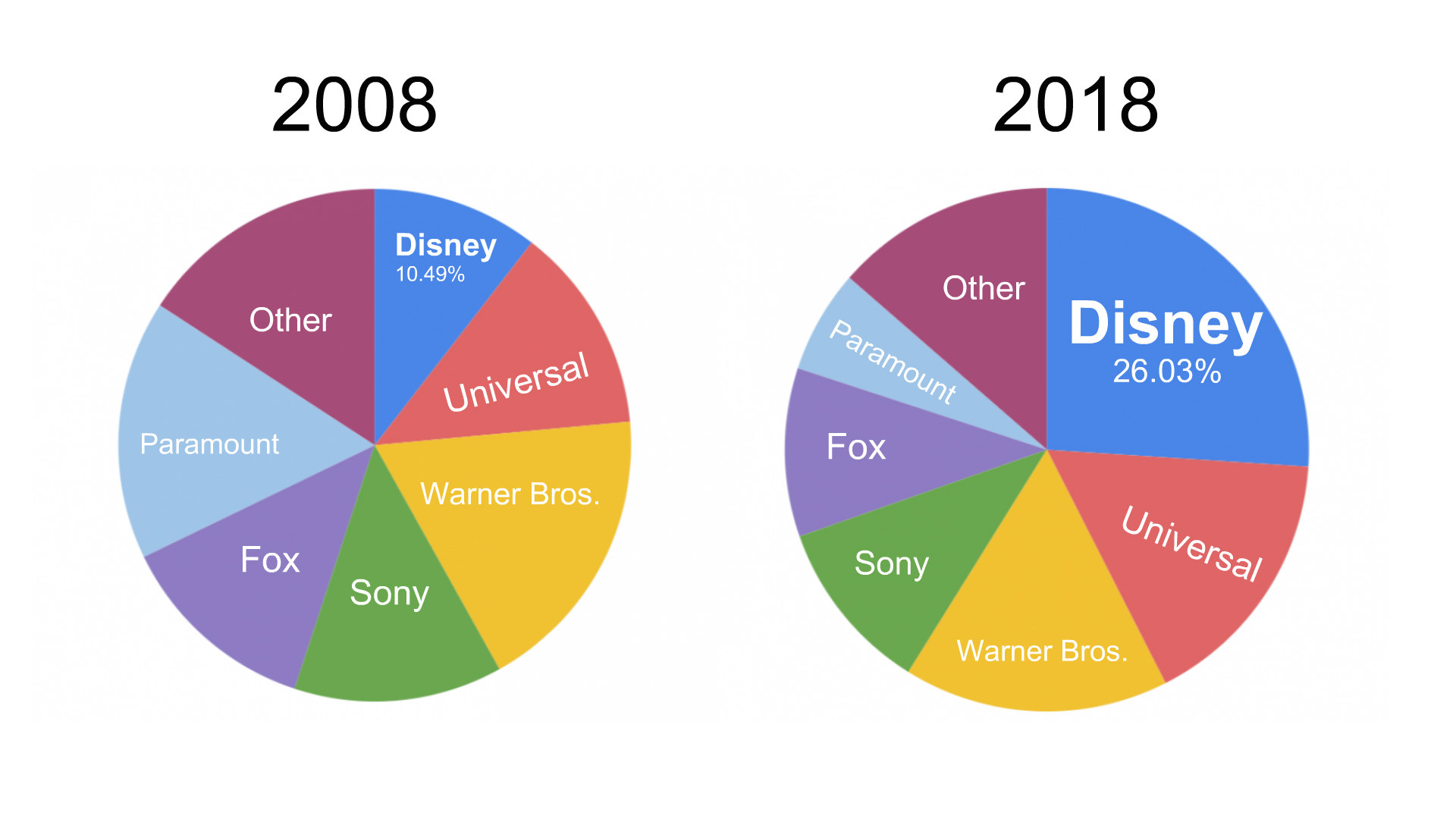 Disney has a shot at the impossible in 2019 — earning more than $9 billion at the global box office.

The entertainment giant has been a box office behemoth for the last five years, setting and then smashing its own records in the film industry over and over again. In 2016, the company’s films earned a record $7.6 billion globally. Last year, the company nearly broke that record again, reaching $7.3 billion. Domestically, Disney made a record $3.09 billion in 2018.

Both of those records could be passed in 2019.

“I would say they should finish pretty substantially above where they finished last year,” Doug Creutz, analyst at Cowen, said. “… I think it’s going to be above eight [billion dollars], it might be above nine.”

Through May, Disney has earned $1.6 billion in North America and more than $4 billion worldwide, according to data from Comscore. Its closest competitor so far this year is Warner Bros., which has earned $702 million domestically since January, about half of which is from “Aquaman,” which was released in December 2018.

Disney has a stellar film slate in 2019. Already, it has released two massive Marvel films — “Captain Marvel” and “Avengers: Endgame” — as well as two live action remakes — “Aladdin” and “Dumbo” — and the nature documentary “Penguins.”

There’s still more to come. Next Friday, a new “Toy Story” film opens, then there is a live action remake of “The Lion King,” “Maleficent: Mistress of Evil,” “Frozen 2” and the final film in the Skywalker saga, “Star Wars: Rise of Skywalker.”

Only 13 films have done half a billion or more at the domestic box office, and nine of those are Disney films.

“They could have five films break half a billion dollars in domestic box office this year,” Creutz said. “Last year they had three.”

“Avengers: Endgame” has already pulled in more than $825 million domestically. Creutz pointed to “Toy Story 4,” “The Lion King,” “Frozen 2” and “Star Wars: The Rise of Skywalker” as the other films that could be destined to haul in $500 million or more in North America this year.

Neil Macker, analyst at Morningstar, noted that “Toy Story 4” will likely make around the same as “Incredibles 2,” which took in $608 million in the U.S. and $634 million internationally.

“A billion-type number would be reasonable for that, if not a little higher,” he said, before noting that “Frozen 2” could earn even more than that. Its Thanksgiving release is a prime date for families to take their kids to the movies and even offers the chance for the film to be watched multiple times during that weekend.

As for “Lion King,” Macker said he wouldn’t be shocked if it broke $2 billion globally. Some analysts even believe that it could be the film that finally dethrones “Avatar” as the highest grossing film of all time. It hits theaters on July 19.

The success of “Maleficent: Mistress of Evil,” which comes out on Oct. 18, is harder to predict. While the first film earned more than $750 million globally, Disney has only released one sequel to one of its live action remakes — and that one didn’t fare well. “Alice Through the Looking Glass,” the sequel to “Alice in Wonderland,” only made $77 million in its domestic tally and $222 million overseas.

Still, Disney will end 2019 on a high note with the release of “Star Wars: The Rise of Skywalker” on Dec. 20. The much anticipated finale to the Skywalker Saga will only have a brief window of ticket sales in 2019, but if its predecessors are any indication, it should haul in around $500 million in the U.S. before the close of the year.

And that’s just the Disney titles. With the acquisition of Fox earlier this year, Disney has nine additional films in its lineup: “Tolkien,” “Dark Phoenix,” “Stuber,” “The Art of Racing in the Rain,” “Ready or Not,” “Ad Astra,” “The Woman in the Window,” “Ford v. Ferrari,” and “Spies in Disguise.”

Disney shares have surged 30% since the start of the year, mostly fueled by the excitement around the launch of its streaming service, Disney+, in November. The popularity of these movies helps to support the expectation that customers will be signing up to access this content.

Race to the top

While it has held a significant portion of the market share over the last few decades, it was only in the last five years that Disney has captured such a high percentage of sales. The 2009 acquisition of Marvel Studios and subsequent release of “Iron Man 2” in 2010, which garnered $312 million domestically, helped boost Disney’s market share.

Another boost was felt in the wake of “Avengers” in 2012 and again in 2015 with Disney’s first Star Wars film, “The Force Awakens.”

While 2019 is set to be a banner year for Disney, the company likely won’t have quite the same financial success in 2020.

“They have a huge slate year,” Creutz said, but he warned. “Next year? There’s a lot less.”

However, from 2021 on, Disney has at least secured the holiday box office, as it is set to release a “Star Wars” and “Avatar” film every other year through 2027.

Disclosure: Universal Studios is owned by NBC Universal and Comcast, the parent company of CNBC.