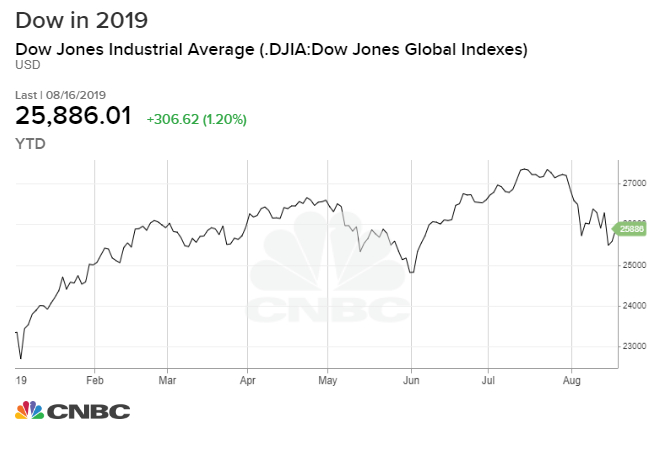 Traders react after the closing bell at the New York Stock Exchange (NYSE) on August 5, 2019 at Wall Street in New York City.

Investors should remain guarded for the rest of August and wait until next month before thinking about returning to stocks despite any one-day bounce, according to J.P. Morgan.

Strategists led by Mislav Matejka doubled down on the bank’s careful stance and prediction of a market pullback, saying that better seasonal data, central bank easing and a possible postponement of tariffs could juice the market in September.

“At the overall market level, we continue with our tactical cautious stance, advocating a market pullback during August,” Matejka wrote in a note. However, “we do not believe that the current pullback will extend for longer than the May one did, and still expect to step in early September, as originally envisaged.”

Major stock indexes across the globe swooned last week, exacerbating steep month-to-date declines, after a pair of key Treasury yields inverted. The 2-year Treasury yield’s rise above that of the 10-year note is heralded on Wall Street as a reliable recession indicator and sent investors scrambling out of risk assets in favor of bonds and precious metals.

The Dow Jones Industrial Average fell 800 points on Wednesday — its worst day of 2019 to date — to close the week down more than 1.5%. The S&P 500, which also fell more than 1% over the last five sessions, posted its third consecutive negative week for the first time since late May.

Though many opted to sell stocks in the wake of the recession fears, the steep sell-off also left some wondering if the cheaper prices could represent a good buying opportunity despite the yield curve inversion.

That appeared to be the case Monday, with the Dow opening higher by more than 300 points.

For J.P. Morgan’s Matejka, the inversion, while important to monitor, doesn’t necessarily mean that stocks can’t hit new highs in the months before a potential recession.

“Put together, the curve inversion might be more an indicator of extreme market nervousness at present, of increasing central banks action, skewed bond ownership, and of global search for yield, rather than a sure sign that US is about to enter a recession,” he added.

“We continue to think that, post the August correction, equities will make new all-time highs into 1H of next year,” he continued. “Having said that, this development nevertheless increases the chances of a potential peak of the market for this cycle in summer 2020.”