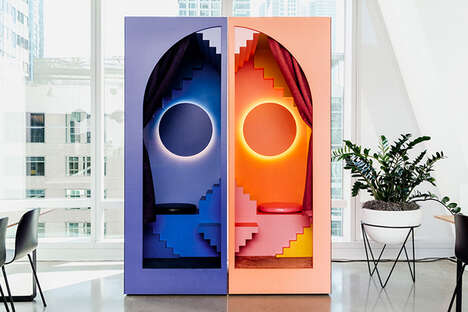 The ‘Eclipse Booths’ have been designed by Adi Goodrich as a series of booths that are targeted towards enhancing the photography capabilities of Instagram users. The booths were inspired, as their name denotes, from the solar eclipse viewing experience and feature the likeness of the natural phenomenon with their rear lighting as well as dramatic angles. This provides users with an array of ways to capture the space, incorporate themselves into the mix and delight their followers with darkly or brightly inspired snap.Goodrich explained the ‘Eclipse Booths’ further saying, “Lit from behind, the round portion of the booth emits a soft, indirect light. The mirrors on the ceiling extend the graphic steps throughout the booth’s interior to allude to… steps leading into eternity.”