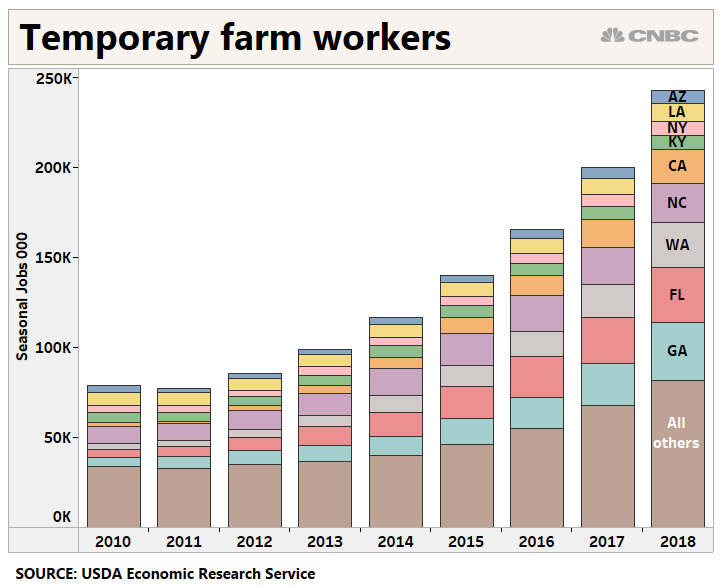 Farmers in the nation’s top agriculture state are increasingly moving to different forms of mechanization to get around the farm labor crunch, according to a California Farm Bureau survey.

The number of farm workers in California has been gradually declining in the past several years and stepped-up immigration sweeps by the federal government in California haven’t helped. Labor shortages have been especially tough on farmers with crops such as tree fruits, grapes and berries.

More than 40% of farmers in the past five years have been unable to obtain all the workers they needed for the production of their main crop, according to the survey, released Tuesday. Of the total reporting shortages, it found about 70% or more indicating they have experienced more trouble hiring in 2017 and 2018.

According to the farm bureau, about 56% of the farmers surveyed have started using mechanization in the past five years, and of the total, more than half said it was because of labor shortages.

“The most frequently used labor-saving technology was some sort of mechanical harvester,” said Dave Kranz, a spokesman for the farm bureau in Sacramento.

A total of 1,071 farmers participated in the survey, which was conducted in early 2019.

The survey also found that other new equipment increasingly being adopted by farmers includes specialized tractor attachments and mechanical planters or weeders. The survey didn’t ask specifically about farm robotic technology, but more of it is getting developed for use in agriculture, such as strawberry harvesting.

California’s $45 billion agriculture industry produces nearly half the nation’s fresh fruits and vegetables as well as more than 90% of the tree nuts, including almonds and pistachios.

Roughly half of the farm workers nationally “lack legal immigration status,” according to U.S. Department of Agriculture figures.

At the same time, the annual California survey found 86% of those agricultural producers surveyed said they have increased wages as part of an effort to hire enough people for their operations. Also, the survey found just over 30% of farmers have switched acreage to cope, and 6% said they had enrolled in the federal government’s H-2A agricultural visa program.

“The one thing that hasn’t been tried is to improve the visa program for people who want to come in from other countries and do some of the work that’s going begging now,” said Kranz.

The Trump administration pledged last year to modernize the nation’s temporary agriculture worker visa program, but so far no significant changes have been made to the H-2A program. Farmers frequently complain that the current H-2A program lacks flexibility and doesn’t adequately accommodate for changes in harvest needs.

In recent years, the H-2A program has included more than 200,000 certified temporary jobs nationally, with California typically being in the top 10 among states. Florida and Georgia are other states with a large number of temporary farm workers.

“It’s just an expensive, very cumbersome and complicated program,” said Daniel A. Sumner, an economist with the University of California-Davis’ Agricultural Issues Center. He also said some large agricultural producers that require thousands of workers may participate.

The farm bureau’s survey found 61% of California farmers reported that they had hired a labor contractor firm to cope with the labor shortage. The farm labor contractors recruit employees and typically handle all the payroll, training and required paperwork.