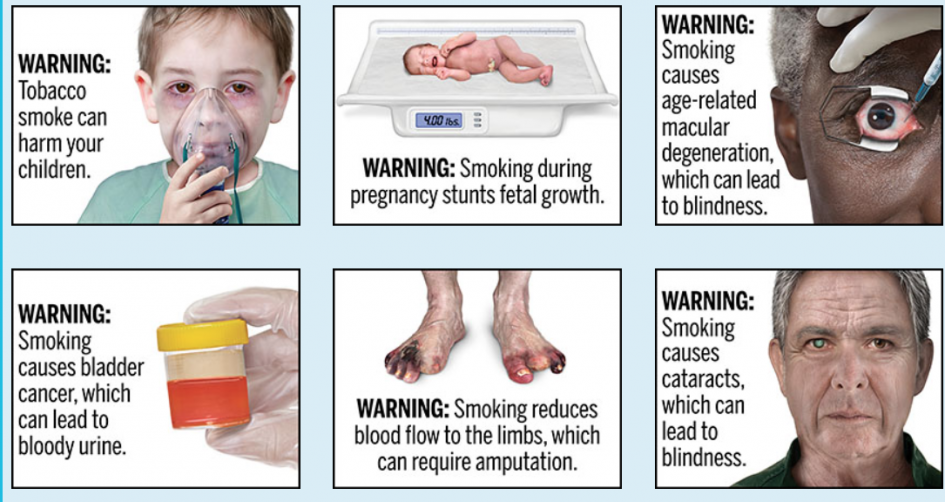 The Food and Drug Administration unveiled new graphic health warnings for cigarette packs on Thursday, a decade after Congress instructed the agency to issue them and seven years after a court ruled that the images it initially chose violated the First Amendment.

As part of the 2009 Tobacco Control Act, Congress mandated the FDA to issue graphic health warnings on cigarette packs “depicting the negative health consequences.” The agency selected nine images in 2011, including one of a man smoking through a tracheotomy hole in his heart and one with a man on an autopsy table with chest staples.

Five tobacco companies — R.J. Reynolds, Lorillard, Commonwealth Brands, Liggett Group and Santa Fe Natural — sued the FDA that year. A federal judge sided with the companies, saying the warnings violated the First Amendment. A federal appeals court affirmed the decision, saying the FDA had not provided “a shred of evidence” proving the labels would “directly advance its interest in reducing the number of Americans who smoke.”

However, a separate ruling upheld the FDA’s authority to require graphic warning labels. The FDA in 2013 said it would go back and issue new regulations. But by 2016, it had not announced anything, so eight public health groups sued.

A federal judge decided the FDA had “unlawfully withheld” and “unreasonably delayed” action to require graphic warnings. She ordered the FDA to issue a proposed rule by Aug. 15, 2019 and a final rule by March 15, 2020.

The tobacco industry is almost certain to challenge the new regulation.

“Filing suit is not the same as winning,” said Dennis Henigan, Campaign for Tobacco-Free Kids’ director of legal and regulatory affairs. “We fully expect there will be a court battle over the new rule.”

Even though smoking rates have hit record lows in the U.S., 34.3 million adults — or 14% of adults — still smoke, according to the Centers for Disease Control and Prevention. Cigarette smoking kills more than 480,000 Americans every year, and more than 16 million Americans are living with a disease caused by smoking, according to the CDC.

“We want it because we think it will save lives,” said Mary Rouvelas, senior counsel at the American Cancer Society Cancer Action Network, one of the eight public health groups that sued the FDA over its delay in issuing a new rule.