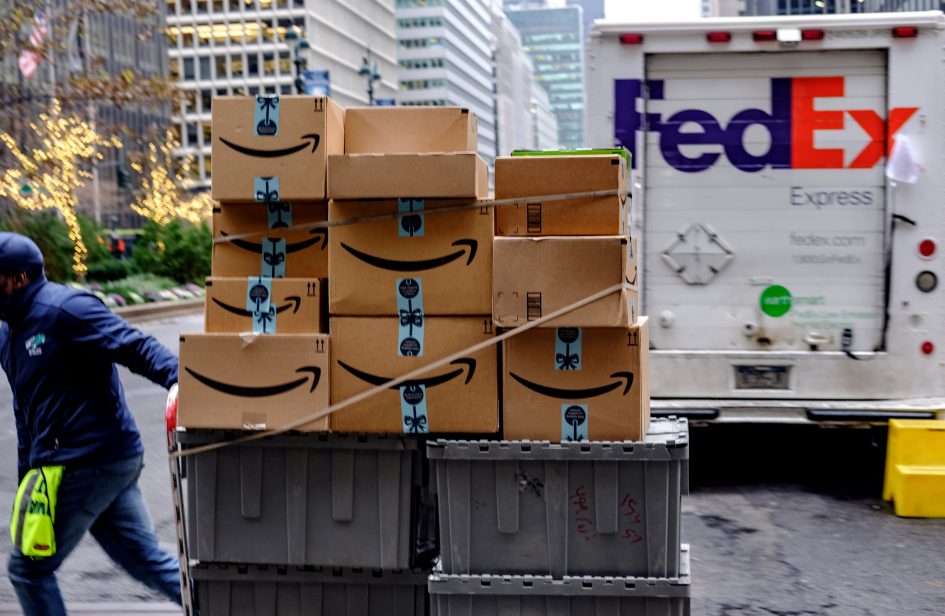 The years-long battle between Amazon and retail companies has spilled over into the shipping industry, with FedEx and UPS adjusting their strategies as the tech giant, once simply a customer, is now a major competitor.

FedEx has announced two changes to its relationship to Amazon in recent months, including ending the ground delivery contract with the e-commerce pioneer. Meanwhile, UPS is exploring new technologies, such as drones and self-driving trucks, to modernize its delivery services.

The moves come as Amazon is building up its delivery fleet, renting planes and offering $10,000 to its employees to leave the company and start their own local delivery business.

“I think they have stated that they are now a competitor to the transport industry,” said Ken Hoexter, a research analyst at Bank of America Merrill Lynch. “And FedEx has clearly viewed them now in their recent moves as an increasing competitor.”

Just as some retail companies are uneasy about working with Amazon, which can be both a partner and a competitor, transportation companies are facing a similar dilemma. And with their customers facing off against Amazon in other industries, shipping companies may need to take sides.

Dan Neiweem, co-founder and principal of digital services and solutions provider Avionos, said that by ditching Amazon, FedEx may make itself more attractive to Amazon’s competitors in the retail space.

He compared it to reports that WalMart is pressuring some of its partners to use Microsoft’s Azure for cloud computing instead of Amazon Web Services. WalMart said “there are a small number of cases involving our most sensitive sales data that we’d prefer not sit on a competitor’s platform” but its vendors can choose the cloud service they prefer.

“I think that what you’ll see is that a lot of the shipments that Amazon was going into the USPS and FedEx with are now going to be transitioned from other retailers who are saying ‘hey I don’t anybody in my space who works with Amazon,'” Neiweem said. “And you see that parallel very, very tightly with AWS and Azure.”

FedEx never relied on Amazon for a huge portion of its business. In a June statement announcing that Amazon would no longer be served by FedEx Express, the shipping company said Amazon accounted for 1.3% of its total revenues in 2018, or roughly $900 million.

“When you go to their sort centers, you can see that Walmart and Jet are a major customer of FedEx’s, so certainly that relationship is as important if not more important than Amazon,” Hoexter said.

“So if you have to choose one, if UPS is larger with Amazon and you’re larger with Walmart, you’re going to kind of work closer with that candidate.”

Throughout its rise, Amazon has relied on UPS for a large portion of its shipping needs. UPS is still more exposed to Amazon than FedEx was. David Ross, transportation research analyst at Stifel, said he estimates that UPS gets between 7% and 9% of its total revenue from Amazon.

“If you go back 10, 15 years UPS was the chosen parcel carrier by Amazon, and when they started their prime two-day offering it was a lot of UPS,” Ross said.

Online shopping has continued to grow since then. According to the U.S. Census Bureau, e-commerce has grown from roughly 4% of total retails sales in 2010 to more than 10% earlier this year. FedEx said it expects e-commerce to grow to 100 million packages per day in the U.S. by 2026.

As e-commerce has boomed, Amazon has struck out more on its own and built a sizable delivery network. The tech giant may not be delivering many third-party packages right now, but Neiweem said that’s “sort of the last stand or threshold that they haven’t crossed yet.”

UPS and FedEx are also investing in their businesses, with both companies expanding delivery to 7 days per week.

FedEx, which said it has “a strong relationship with retailers of all sizes,” has started offering retailers extended hours for package pickup, partners with stores such as Dollar General to create customer pick up areas and is experimenting with a delivery robot.

UPS, which saw demand for next day air shipping increase 30% in the second quarter, has invested in TuSimple, an autonomous shipping business, and is forming a drone subsidiary called UPS Flight Forward. The company is also expanding its air fleet and is scheduled to add 11 cargo planes this year.

The growing demand for fast shipping has weighed on the financial results for large shipping companies. More home deliveries means shipping companies make less per stop than if they delivered a lot of packages to one spot, like a convenience store.

Hoexter said that domestic margins at UPS have been under pressure for the past several years, and that is where analysts will look to see if its new investments and increased leverage with Amazon are working.

“As we get into peak season, have they found a way to stabilize those margins despite the growth of e-commerce? That’s going to be the key for the stock. When you ask what do we look for its the margin side and pricing if we start to see that improving or stabilizing. That’s the first step,” Hoexter said.

With FedEx now out of the picture, UPS may also be able to gain some short-term leverage on pricing, Hoexter said. That opportunity may not last for long, as Amazon continues to expand its own delivery network and expects to have 70 planes in its fleet by 2021.

For FedEx, the separation means the company can show that its e-commerce success is not tied to Amazon.

“FedEx is just showing people that they don’t need Amazon to be a good business, and they feel that they can continue to grow without Amazon. I think they wanted to just distance themselves from Amazon in a way that made their own growth story a little more clear to people,” Ross said.