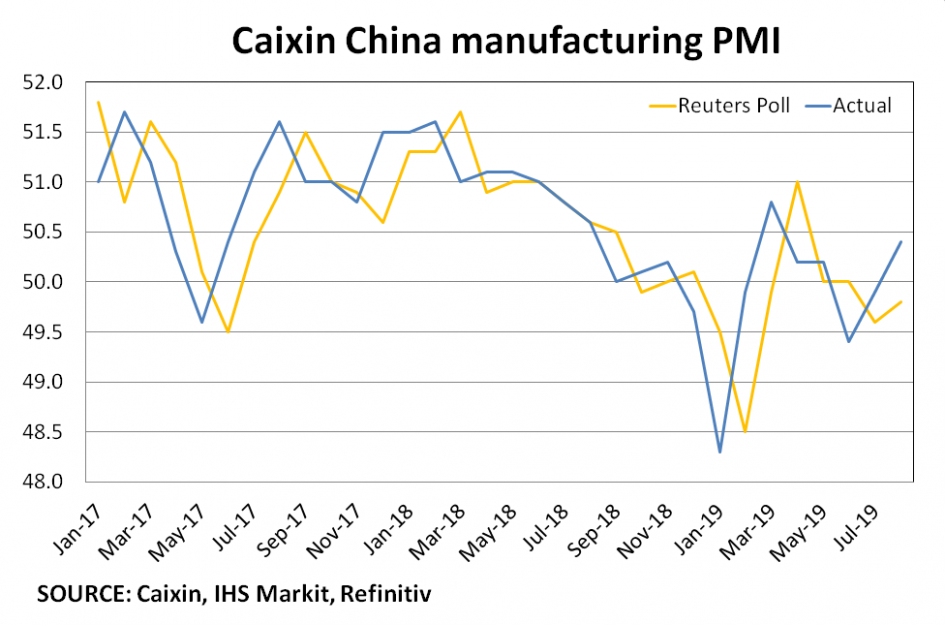 This photo taken on October 17, 2018 shows a worker inspecting shoes at a factory in Qingdao in China’s eastern Shandong province.

China’s manufacturing activity expanded in August, according to results of a private survey released on Monday as production increased, but export sales fell amid the country’s escalating trade war with the U.S.

The Caixin/Markit factory Purchasing Managers’ Index (PMI) was 50.4 in August — better than than the 49.8 analysts polled by Reuters had expected. The Caixin/Markit manufacturing PMI was 49.9 in July.

The subindex for new orders stayed in expansionary territory in August, but inched down from July, suggesting flat demand for manufactured products, said Zhengsheng Zhong, director of macroeconomic analysis at CEBM Group, a subsidiary of Caixin..

However, “the gauge for new export orders remained in contractionary territory and fell to the lowest level this year in August, reflecting declining foreign demand amid an intensifying trade dispute between China and the U.S., ” Zhong said in a press release.

The two countries imposed new tariffs on each other’s imports on Sunday.

Despite the improved headline PMI reading in August, due in part to improved production activity, the outlook is not rosy with long-term downward pressure, said Zhong.

“Overall demand didn’t improve, and foreign demand declined notably, leading product inventories to grow,” he wrote. “There was no sign of an improvement in companies’ willingness to replenish inventories of inputs or in their confidence. Industrial prices trended down.”

The results of the private survey came after official data showed the manufacturing PMI fell to 49.5 in August, China’s National Bureau of Statistics said on Saturday — that’s compared to 49.7 in July. A Reuters poll showed analysts expected the official PMI to stay unchanged from July.

The PMI is a survey of how businesses view the operating environment. Such data offer a first glimpse into what’s happening in an economy, as they are usually among the first major economic indicators released each month.

The China PMI is closely watched by global investors for signs of trouble amid a domestic economic slowdown and the ongoing U.S.-China trade dispute.

— CNBC’s Yen Nee Lee and Reuters contributed to this report.