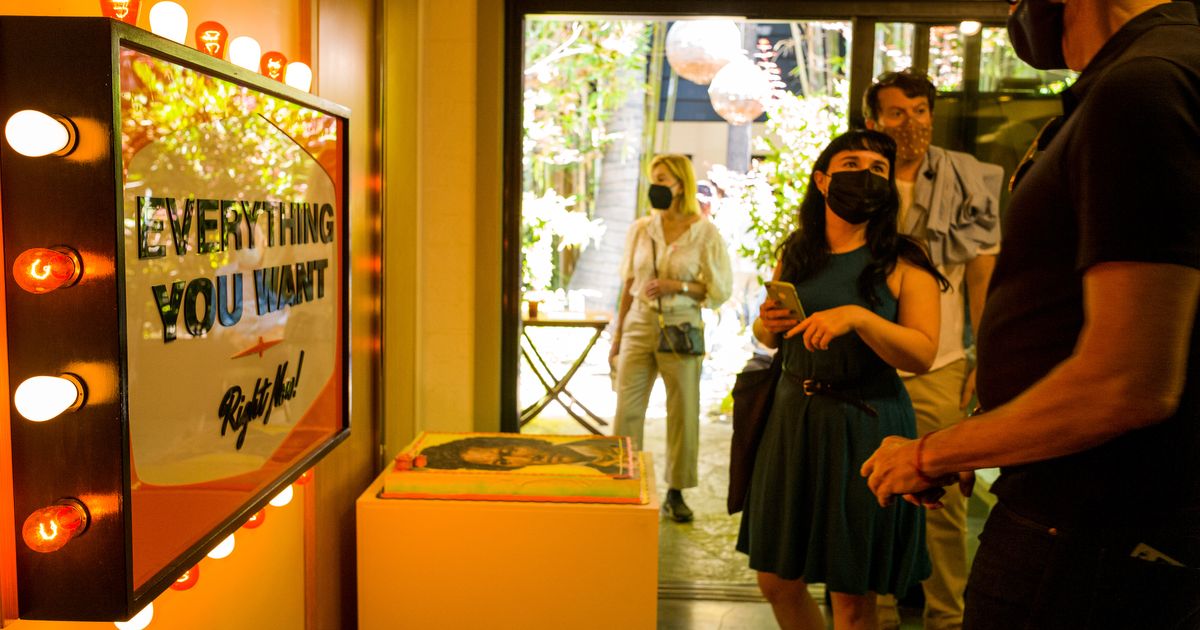 The first big art fair weekend in Los Angeles since February 2020 has gotten underway, albeit under the cloud of increasing Covid virus infections from the new delta variant. Felix Art Fair (29 July–1 August) is the only contemporary fair making a real-life appearance, at the Hollywood Roosevelt hotel.  Frieze Los Angeles returns as an online viewing room.  Last year Frieze rescheduled their usual February appearance to July, but then cancelled in April citing “continuing uncertainty,” a reference to coronavirus restrictions.  Also, their plan to hold the fair at different locations in Los Angeles seemed have met the hard wall of reality – Angelenos already drive too much.  Meanwhile, Gallery Weekend Los Angeles (28 July–1 August), modelled after gallery weekends in London and Berlin, makes its debut.This third edition of Felix features 29 LA-based galleries, although several were founded and have galleries elsewhere, such as GAVLAK, Tanya Leighton, and Nino Mier. Participation in Felix is invitation-only, and this year about a third of the galleries are new to the fair, including heavy-hitters Gagosian, Blum & Poe, and David Kordansky.  The venue is a chic, vintage hotel built during Hollywood’s Golden Age.  In previous editions, Felix occupied several floors, but this year it is only on one level, occupying the “cabanas” around the popular swimming pool and bar. Starting at 11 a.m. of the first day preview, crowds thronged the narrow hallways and compact rooms of the hotel before thinning out to more comfortable levels. “It’s in our own backyard, and it’s hard not to participate and say hello,” says Kurt Mueller of David Kordansky.  They are holding a one-man show by Calvin Marcus. “Everything is sold – four paintings, six ‘nose’ pots,” Mueller says. The paintings are detailed botanicals, and the pots are irregularly shaped garden pots decorated on the sides with the shapes of human noses that run if overwatered. “People really are coming in from out of town,” says Sarah Gavlak of her own gallery, “and we’ve met new people.” She indicates sales made from their offering of three young artists — Alex Anderson, April Bey, and Kim Dacres — have made it worth participating.  Gagosian’s senior director Deborah McLeod is positive about returning to the fair. “I hope we keep it on the calendar,” she says, in between fielding calls on her cell phone.  “It’s been a very good experience.” Health precautions were a priority and include limiting capacity and requiring visitors to show proof of completed Covid vaccinations or a negative Covid test. Mask wearing is required indoors. Valentine also cites the layout of the fair, where each cabana has access to an outside space.  “We are already in a fortunate situation in terms of Covid precautions because we are a hybrid indoor/outdoor fair,” he says. Meanwhile, Gallery Association Los Angeles has launched Gallery Weekend, with some 70 of its members and other art spaces sponsoring longer hours, talks, and special presentations. Several galleries, such as L A Louver and Château Shatto, have coordinated their in-gallery offerings with what has being posted on the Frieze Viewing Room.  A convenient map of the galleries is available online at https://galleryplatform.la/