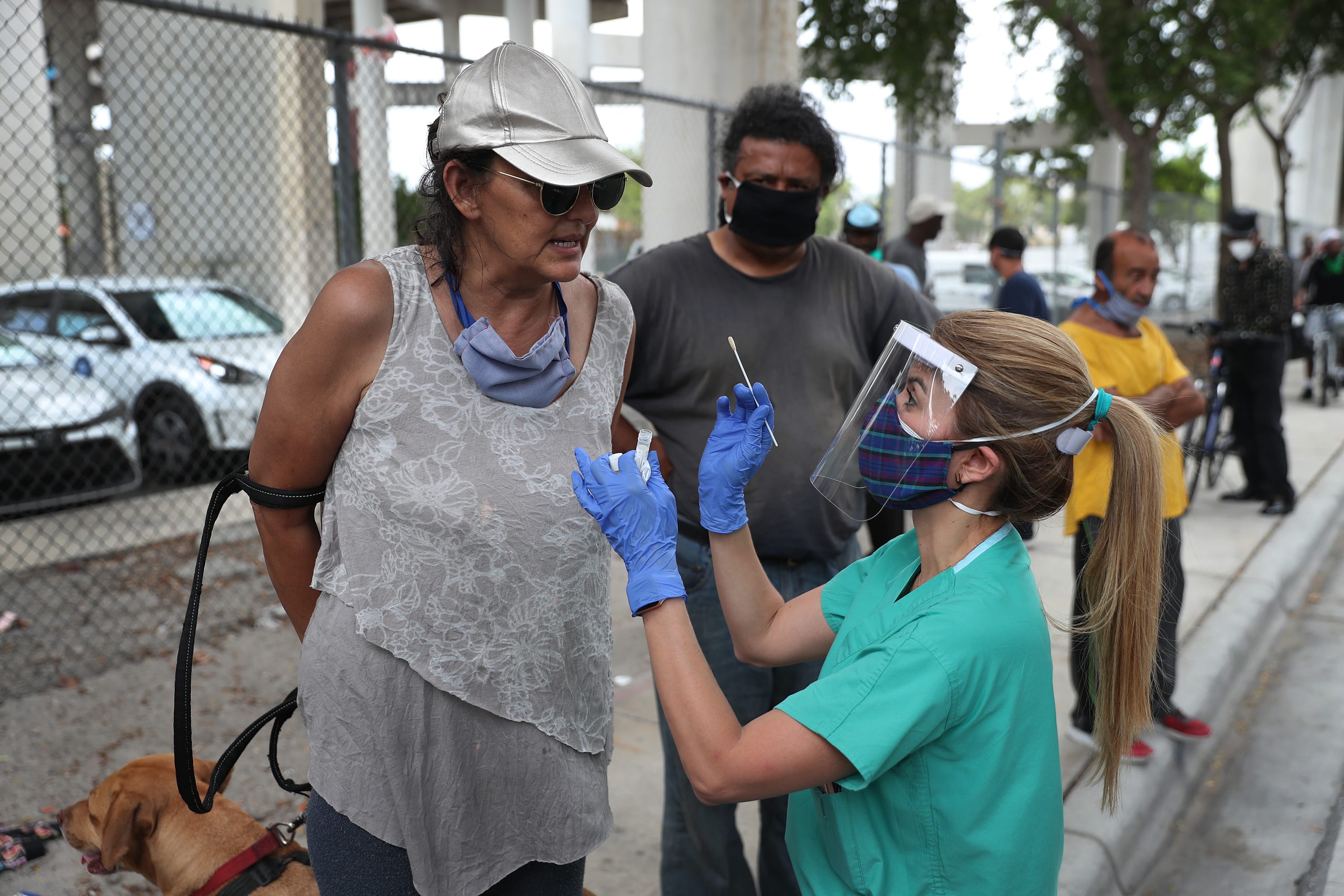 Florida on Sunday reported 15,299 confirmed coronavirus cases in a single day, surpassing the state’s previous high by nearly 4,000 and setting a grim new daily record for the nation. The surge in infections brings the state’s total number of cases to 269,811. More than 18,000 people have been hospitalized since the pandemic hit the state. The Florida Department of Health also reported that 45 more people died from the virus, bringing the statewide death toll to 4,346. Nearly 143,000 people were tested Saturday in Florida with 11.25% of the results coming back positive for coronavirus.  That’s Florida’s lowest rate of positive test results since the end of June as more people receive tests. On Wednesday, the percentage of people tested who were positive for the virus was much higher at 18.35%. Admiral Brett Giroir, who leads the Trump administration’s testing efforts, said the rate of positive test results has leveled off this week even as it remains high in hotspot states. Giroir said he expects hospitalizations and deaths to increase over the next two to three weeks before also leveling off and then declining. “We do expect deaths to go up. If you have more cases, more hospitalizations, we do expect to see that over the next two or three weeks before this turns around,” Giroir told ABC’s “This Week.” “We’re not out of this at all, we’re all very concerned,” he said, “but we have seen this week a leveling of what we call the percent positive. That’s our sort of first indicator, if that levels we’re going to see emergency rooms drop, hospitalizations drop.”Giroir warned, however, that the trajectory of the virus depends on mitigation measures taken by state and local governments. To reverse the current trend, 90% of people in hotspot areas need to wear masks in public, he said. Bars should close, restaurants need to reduce capacity and in some cases lockdowns should be on the table, he said. As the virus spreads in Florida, Republican Gov. Ron DeSantis suspended on-premise alcohol consumption at bars but has rejected calls to issue a statewide mask mandate. Local authorities like the county governments in Miami-Dade and Broward, the state’s two most populous counties, have stepped in and mandated masks in all public spaces. Even as Florida continues to report record infections, the state is set to host the Republican National Convention in Jacksonville next month and has required schools to reopen in August for at least five days a week. Disney also started a phased reopening of its theme parks in Florida, with leadership boasting of new safety measures and altered operations.The state’s testing supply is running low and some local officials are concerned that hospitals experiencing an influx of patients will soon reach capacity. Miami-Dade County Mayor Carlos Gimenez told CNN on Sunday that “it won’t be long” until hospitals in his county reach capacity. Florida has become a major epicenter of the U.S. outbreak, as most infection surges are located in states in the South and West.Florida, Arizona, California and Texas, all hotspots for the virus, have seen their average daily death tolls hit record highs in recent days, and health experts warn that deaths will continue to increase in the next several weeks. In an interview with CBS on Sunday, Former FDA Commissioner Scott Gottlieb predicted that southern states will likely experience a peak in cases in the next two to three weeks, and warned of an “extended plateau” after that, comparing it to the situation in Brazil, one of the hardest hit countries in the world. At least 134,000 people in the U.S. have died since the outbreak began in March, and more than 3 million cases have been reported across the country, according to data from Johns Hopkins University. The U.S. has reported more than 60,000 new cases for three days in a row now.