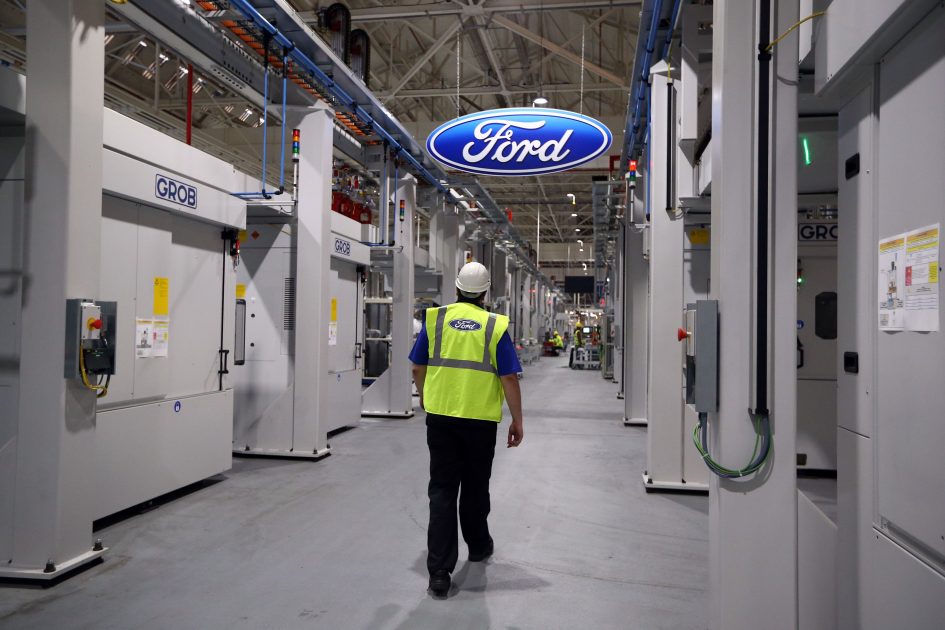 An employee walks past a Ford logo in the yet-to-be-completed engine production line at a Ford factory on January 13, 2015 in Dagenham, England.

Ford is trying to reduce its carbon footprint by recycling plastic bottles and using them to make vehicle parts.

The automaker uses an average of 300 recycled bottles per vehicle, roughly 1.2 billion plastic bottles per year, to make the underbody shields for all of their cars and SUVs as well as the wheel liners on F-Series trucks.

Ford said recycled plastic is ideal for automotive parts because of it’s light weight, which gives the added benefit of improving the aerodynamics of vehicles. Better aerodynamics also promote fuel efficiency and have allowed for a quieter environment on the 2020 Ford Escape, according to Ford.

“The underbody shield is a large part, and for a part that big, if we use solid plastic it would likely weigh three times as much,” Thomas Sweder, a design engineer at Ford Motors, said in a statement.

The bottles are shredded into small pieces and sold to suppliers that turn them into fiber used to make sheets of plastic. Ford then uses these sheets to make the underbody cover for its vehicles.

Ford has used recycled plastic as far back as the 1990s. According to environmental advocacy group Earth Day Network, an estimated 9.1 billion tons of plastic has been manufactured since it’s creation in the 1950s, and 91% of the world’s plastic waste has not been recycled. Since it’s not biodegradable, nearly all of that plastic is still in the world.

“We do it because it makes sense technically and economically as much as it makes sense for the environment,” Sweder said. “This material is very well suited for the parts we’re making with it, and is extremely functional.”

Earlier this year, Ford announced that a number of its manufacturing plants will soon be powered by 100% locally sourced renewable wind energy.