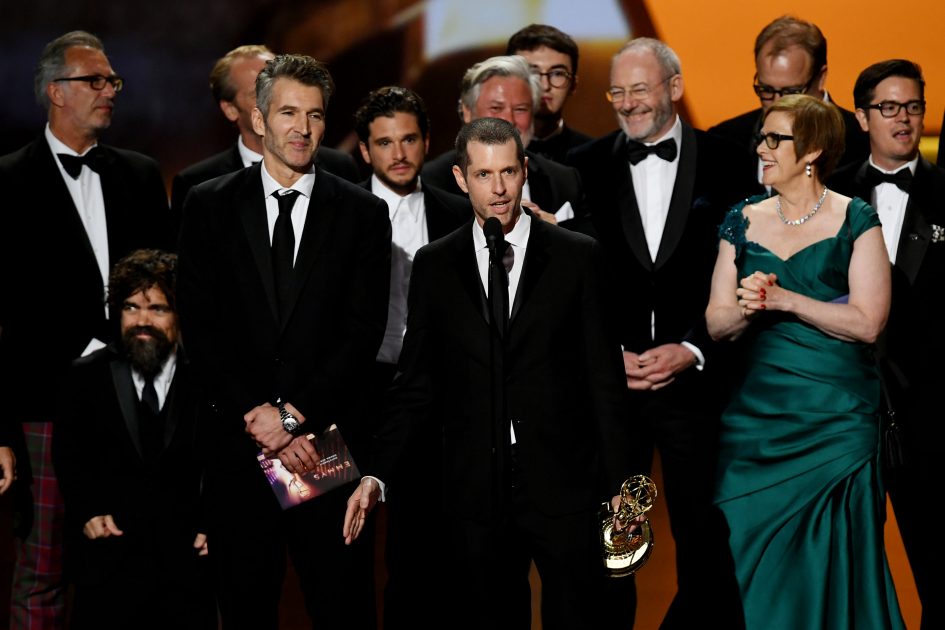 D. B. Weiss (C, speaking), David Benioff (3rd L) and cast and crew of ‘Game of Thrones’ accept the Outstanding Drama Series award onstage during the 71st Emmy Awards at Microsoft Theater on September 22, 2019 in Los Angeles, California.Kevin Winter | Getty Images Entertainment | Getty ImagesDespite mixed fan and critic reactions to the final season of “Game of Thrones,” the eight-season epic took home the top prize in the drama category at the Emmy Awards on Sunday.Closing out the 71st annual television awards ceremony, David Benioff and D.B. Weiss thanked creator George R. R. Martin for entrusting his book series to the young producers more than a decade ago and praised the cast and crew for their work on the program.Since 2011, HBO’s “Game of Thrones” has garnered 160 Emmy nominations and taken home 59 prizes for everything from acting and editing to special effects and sound mixing.On Sunday, the program earned two Emmys, one for outstanding supporting actor, which went to Peter Dinklage for his portrayal of Tyrion Lannister, and one for outstanding drama.Earlier in the month, “Game of Thrones” won 10 additional awards during the Creative Arts Emmy ceremony.”Game of Thrones” final award tally falls short of the 67 Emmys that “Saturday Night Live” has accrued over its 44 seasons. “SNL” earned two statues on Sunday, one for outstanding variety sketch series and one for outstanding directing.The final season was widely criticized by fans who felt the pacing and its treatment of previous character developments were not up to par. Still, the show continued to have record-breaking viewership.Each episode, save for one, topped viewer counts from the season seven finale, which was the series high prior to season eight’s release.Disclosure: Comcast is the parent company of NBCUniversal and CNBC.