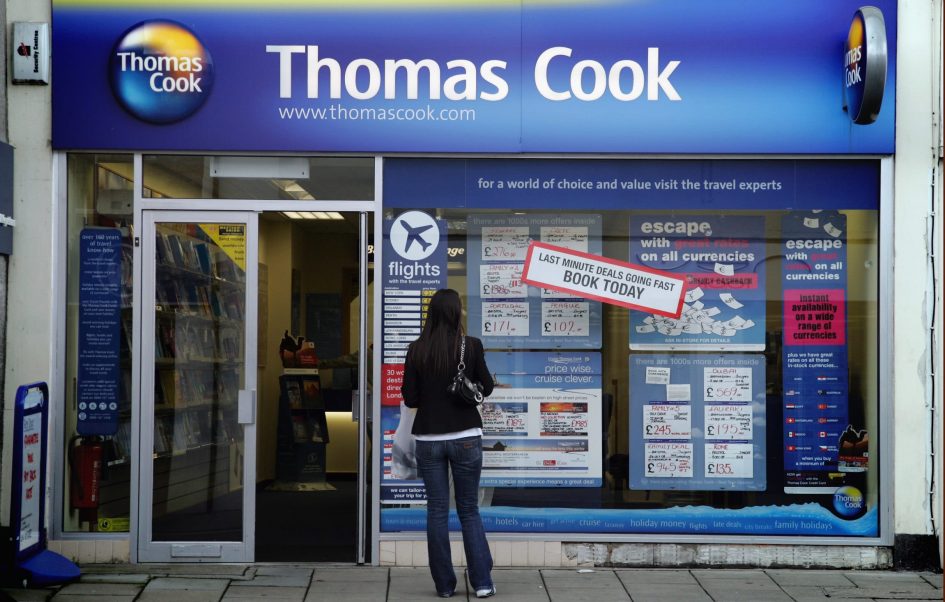 A woman looks at holidays for sale in a Thomas Cook travel agent window in Bristol, England.Getty ImagesThomas Cook, the world’s oldest travel firm, collapsed on Monday, stranding hundreds of thousands of holidaymakers around the globe and sparking the largest peacetime repatriation effort in British history.Chief Executive Peter Fankhauser said it was a matter of profound regret that the company had gone out of business after it failed to secure a rescue package from its lenders.The UK’s Civil Aviation Authority (CAA) said Thomas Cook had now ceased trading and the regulator and government would work together to bring the more than 150,000 British customers home over the next two weeks.”I would like to apologise to our millions of customers, and thousands of employees, suppliers and partners who have supported us for many years,” Fankhauser said in a statement released in the early hours of Monday morning.”It is a matter of profound regret to me and the rest of the board that we were not successful.”The government and aviation regulator said that due to the scale of the situation some disruption was inevitable. “Thomas Cook has ceased trading so all Thomas Cook flights are now cancelled,” the CAA said.The demise of Thomas Cook marks the end of one of Britain’s oldest companies that started life in 1841 running local rail excursions before it survived two world wars to pioneer package holidays first in Europe and then further afield.The firm now runs hotels, resorts and airlines for 19 million people a year in 16 countries. It currently has 600,000 people abroad, forcing governments and insurance companies to coordinate a huge rescue operation.Pictures posted on social media showed Thomas Cook planes being diverted away from the normal stands, and being deserted as soon as they had landed.Crippled by its 1.7 billion pounds of debt, Thomas Cook has been hit by online competition, a changing travel market and geopolitical events that can upend its summer season. Last year’s European heatwave also hit the company hard as customers put off last minute bookings.The corporate collapse has the potential to spark chaotic scenes around the world, with holidaymakers stuck in hotels that have not been paid in locations as far afield as Goa, Gambia and Greece.In the longer term it could also hit the economies of its biggest destinations, such as Spain and Turkey, leave fuel suppliers out of pocket and force the closure of its hundreds of travel agents across British high streets.The British government and the aviation regulator have drawn up a plan to use other airlines to bring Britons home. In Germany, one of the biggest customer markets for Thomas Cook, insurance companies will take charge.