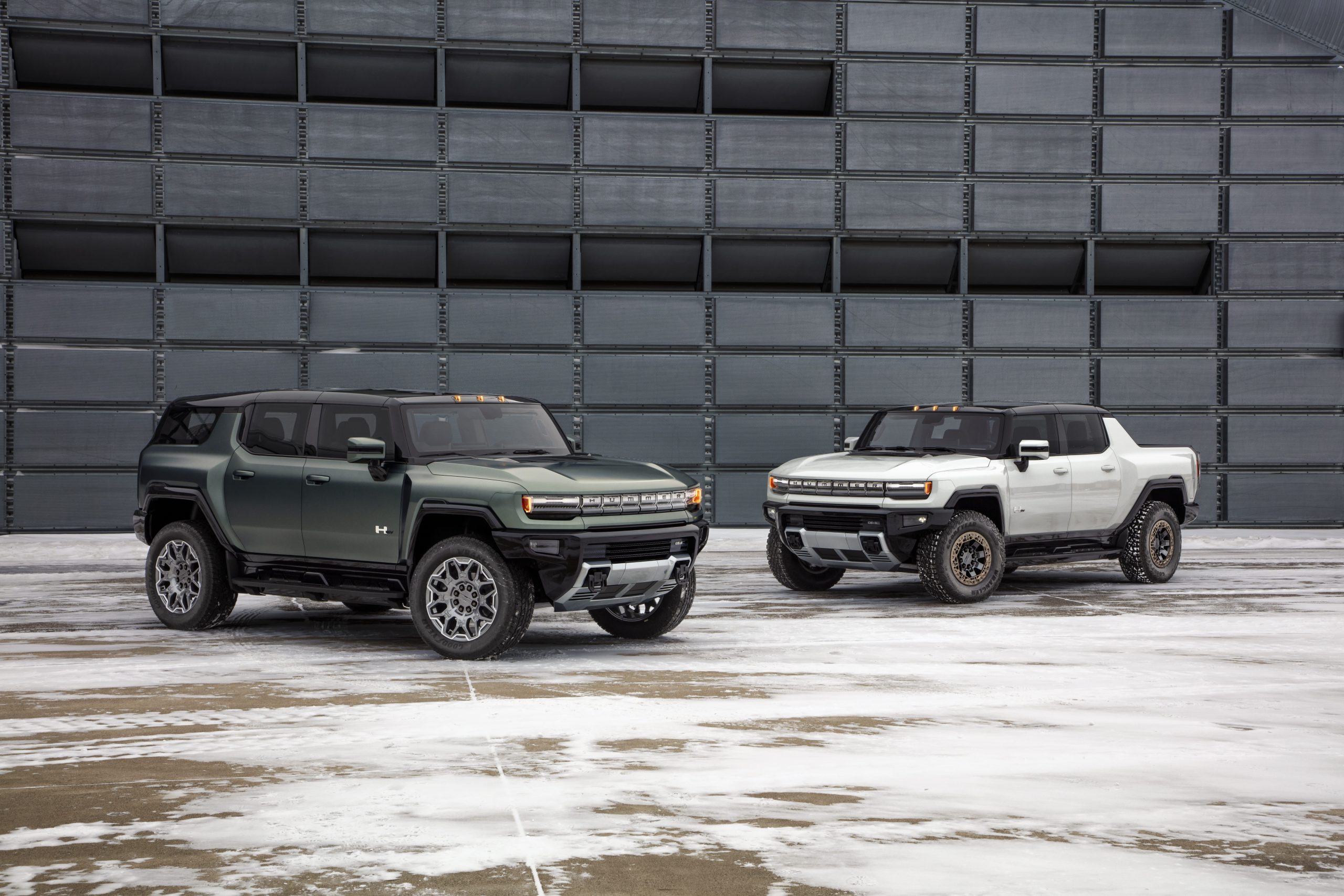 The 2024 GMC Hummer EV SUV and 2022 GMC Hummer EV sport utility truck, or SUT.GMDETROIT – General Motors unveiled an all-electric Hummer SUV Saturday that will top $110,000 when it goes on sale in 2023. The vehicle will be the stablemate to an upcoming Hummer pickup that’s scheduled to go on sale this fall.”The GMC Hummer EVs were envisioned to be the most capable and compelling electric supertrucks ever,” Duncan Aldred, global vice president of GMC, said in a statement.The 2024 Hummer EV SUV features the same eye-popping torque of up to 11,500 foot-pounds as the pickup, however it is estimated to have 50 miles less range, 170 less horsepower and be half a second slower than the pickup due to a smaller battery size.The SUV’s range is estimated to be between 250 miles and more than 300 miles depending on the model. The 0 to 60 mph is as fast as about 3.5 seconds. It has up to 830 horsepower, according to GM.The Hummer EV SUV debuted during an ad narrated by NBA star LeBron James during the NCAA’s Final Four game between the Baylor Bears and Houston Cougars on CBS.PricingFull pricing for the SUV will range from about $80,000 for a base model to $110,595 for a special “Edition 1” launch model with an available “extreme off-road package.” The pricing varies based on the range, performance and battery size of the vehicle.GM said it will begin with producing the highest priced models in early 2023, followed by less expensive versions into spring 2024. The automaker is taking reservations for the vehicle on its website.The pricing and tiered production are similar to how GM is launching the Hummer pickup. Initial availability of the Hummer EV pickup in the fall will start at $112,595 for an “Edition 1,” which has sold out. A $99,995 version will be available a year later, followed by $89,995 and $79,995 models in the springs of 2023 and 2024, respectively.The exterior of the vehicles look the same aside from the closed-off back of the SUV compared to the open bed of the pickup. They both feature a new iteration of Hummer’s traditional slotted grille with “HUMMER” backlit across the front of the vehicles.  The 2022 Hummer EV features a new iteration of the vehicle’s traditional slotted grille with “HUMMER” backlit across the front of the truck.GMBoth also offer a host of off-road parts and features such as adaptive air suspension and “crab mode” that allows it to rotate all four wheels at once, allowing the truck to almost move diagonally.The SUV, like the pickup, is available with GM’s Super Cruise driver-assist system that allows for hands-free driving on more than 200,000 miles of limited-access freeways in the U.S. and Canada.Resurrecting HummerThe Hummer and SUV will be produced at an assembly plant in Detroit. They are the first Hummers since GM discontinued well-known, gas-guzzling versions of the vehicles in 2010.GM President Mark Reuss previously told CNBC that the decision to resurrect Hummer for EVs was made following a discussion between himself, GM CEO Mary Barra and at least one other executive in early 2019 about reimagining Hummer for a new generation of buyers. “We just wanted to do it. We saw the opportunity for trucks,” Reuss said during GM’s “EV Day” earlier this year. “We always wanted to do this with Hummer, but it had so much baggage from a gas guzzler standpoint, so we turned it on its head.”The Hummer pickups, which GM is calling a sport utility truck, or SUT, will be the first vehicle with the automaker’s next-generation electric vehicle platform and batteries under a $27 billion plan to shift to electric and autonomous vehicles through 2025.