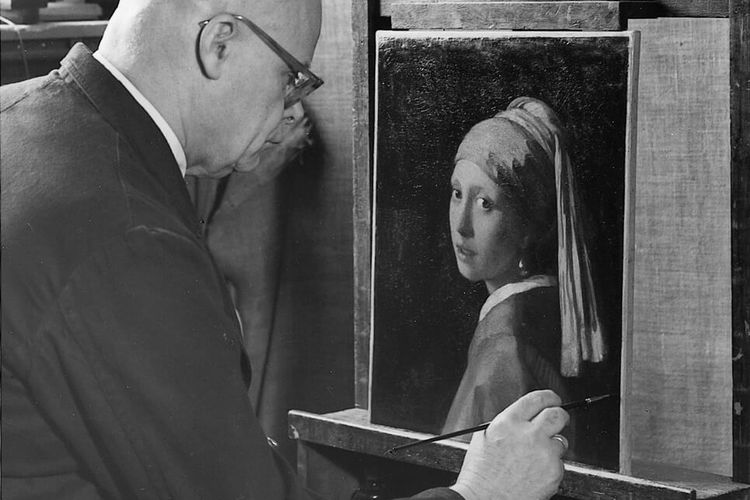 Jan Cornelis Traas, the caretaker of a museum building in The Hague, was entrusted with restoring around 200 Van Gogh paintings between the wars. Revelations about his role were given in a paper presented by Ella Hendriks, the Van Gogh Museum’s former senior conservator, at a symposium in Amsterdam last Friday. It comes as a shock that someone with minimal training treated the canvases of such an important artist.

Until now Traas has remained an obscure figure, since he never published anything and apparently kept no records of his work. In 1922, at the age of 20, he was taken on as the “concierge” (or caretaker) of the Mesdag Museum in The Hague, where Willem Steenhoff served as the director. Steenhoff was a good friend of Jo van Gogh-Bonger, Vincent’s sister in law.

As Traas was underemployed in the small museum, Steenhoff suggested to Jo’s son Vincent Willem that his young concierge should be trained as a restorer and work on the family’s Van Goghs. In 1924 Traas began by repairing frames and the following year he began simple work on paintings. Steenhoff then asked the Rijksmuseum to train Traas, but their restorers responded that they were “too busy”. Steenhoff was an art historian and a painter—not a restorer—but he may have given Traas some minimal practical instruction.


In early 1927 Traas was entrusted with restoring a group of the Van Gogh family’s pictures, including the version of the Sunflowers which is now in the Van Gogh Museum. He undertook a comprehensive restoration of the still life, which involved the temporary removal of a narrow wooden extension added by Van Gogh and fitting a new stretcher, as well as lining, cleaning, retouching and varnishing the picture.

Lining, followed by varnishing, was a common procedure at the time, but one which ended up damaging the Sunflowers. The heat and solvents involved in the process can lead to the colours being softened and the molten lining adhesive seeps into the canvas, causing the painting to darken. This helps to explain why the Amsterdam Sunflowers has lost much of its original vibrancy.

Later in 1927, after treating the Sunflowers, Traas undertook his first organised training. He went to Vienna for a five-month internship at the Kunsthistorisches Museum, where he performed simple remedial work. In 1931 Traas was taken on as a restorer at the Mauritshuis in The Hague, although he remained the concierge at the Mesdag Museum until 1940. At the Mauritshuis he developed his skills and remained there until his retirement in 1962 (he died in 1984). Among his last jobs, the year before he retired, was the conservation of Vermeer’s Girl with the Pearl Earring (c.1665).


Jan Cornelis Traas restoring Vermeer’s Girl with the Pearl Earring (c.1665) at the Mauritshuis in 1961, the only known photograph of him
© Royal Picture Gallery Mauritshuis, The Hague


In 1961 Traas also restored the Sunflowers for a second time, once again removing the wooden extension added by Van Gogh and this time securing it with large bolts. Earlier this year conservators at the Van Gogh Museum considered further work to try to bring the painting back closer to its original condition, but this was ultimately deemed inadvisable because of the consequences of the 1927 and 1961 Traas restorations.

The 200 Van Gogh paintings which Traas restored for the family between 1926 and 1933 represent nearly a quarter of the artist’s works. Hendriks, now a professor at the University of Amsterdam, says that the Traas treatments should be seen in the context of his time: “Understanding the consequences of these earlier treatments provides a basis for dealing with the legacy of the past.” But it remains highly disturbing that a restorer with virtually no formal training and with little experience should have been given the task of restoring so many of Van Gogh’s paintings.

• A scholarly volume on Van Gogh’s Sunflowers Illuminated: Art Meets Science, including an essay by Hendriks, was published by Amsterdam University Press last week. The Van Gogh Museum’s exhibition on the Sunflowers runs until 1 September.

• Martin Bailey’s book The Sunflowers are Mine: The Story of Van Gogh’s Masterpiece is now available in paperback.

Martin Bailey is a leading Van Gogh specialist and investigative reporter for The Art Newspaper. Bailey has curated Van Gogh exhibitions at the Barbican Art Gallery and Compton Verney/National Gallery of Scotland; he is now co-curating Tate Britain’s The EY Exhibition: Van Gogh and Britain, opening in March 2019. He has written a number of other bestselling books, including Starry Night: Van Gogh at the Asylum, published by White Lion (available through Amazon in the UK and US), The Sunflowers are Mine: The Story of Van Gogh’s Masterpiece (Frances Lincoln 2013, available in the UK and US) and Studio of the South: Van Gogh in Provence (Frances Lincoln 2016, available in the UK and US).

The blog Adventures with Van Gogh is taking a summer break, returning on 6 September

Lucian Freud’s model David Dawson looks forward to artist biography and self-portrait smorgasbord
What can the arts expect from next UK prime minister?
To Top
error: Content is protected !!
Top