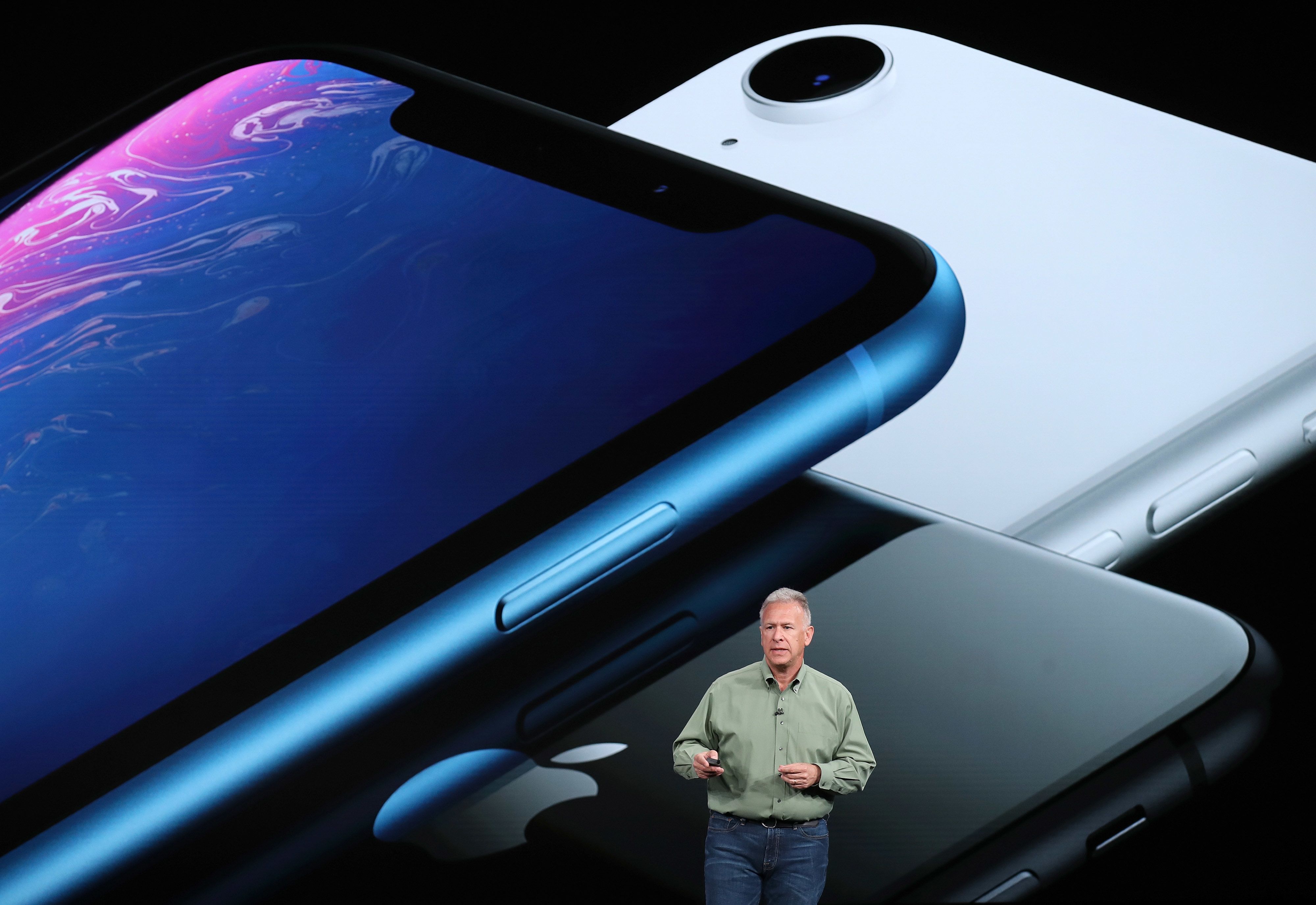 Phil Schiller, senior vice president of worldwide marketing at Apple Inc., speaks at an Apple event at the Steve Jobs Theater at Apple Park on September 12, 2018 in Cupertino, California.

An executive board led by Apple marketing SVP Phil Schiller meets every week to discuss controversial apps or other iPhone software programs that may infringe Apple’s App Store guidelines.

The “executive review board,” or ERB, sets policy for Apple’s Worldwide Developer Relations department, which is often called App Review. ERB is also the body that makes the final call whether an app can stay on the store, or if it’s banned.

For example, last year, the ERB and Schiller made the decision to ban the Infowars app from the App Store for violating content policies after publishing threats to a reporter.

Inside App Review, Apple employees manually screen every single iPhone app before they become available to download on Apple’s platforms. App Review has grown in importance as Apple increasingly emphasizes its App Store services as a source of revenue and iPhone security as a key selling point.

Apple recently opened new App Review offices in Cork, Ireland, and Shanghai, China, according to a person familiar with the matter. The department has added significant headcount in recent years, they added.

The additional attention to the department comes as Apple’s platform is under more scrutiny than ever. In the United States, presidential candidate Elizabeth Warren says that Apple competes with the apps on its own platform. Spotify, the streaming music service that competes with Apple Music, has filed a competition complaint with the EU. And Apple’s own developers for years have chafed under App Review’s sometimes arbitrary rejections and boilerplate feedback.

Last month, Apple published a new webpage that explains the principles that govern the App Store, as well as the most common reasons for rejection to show an increased level of transparency over previous years.

“We’re proud of the store we’ve built and the way we’ve built it,” Apple said on the page.

“We created the App Store with two goals in mind: that it be a safe and trusted place for customers to discover and download apps, and a great business opportunity for all developers,” it continued.

How the process works

Any app or update that runs on an iPhone needs a stamp of approval from a human being in order to be distributed on Apple’s App Store. While Apple does use automated filters, people familiar with the department say it’s always relied on manual labor.

Unlike content moderators at Silicon Valley companies like Facebook or YouTube that rely on tens of thousands of contractors, Apple’s app reviewers work for Apple. They’re paid hourly, have employee badges and get Apple benefits like health care. Everyone starts out reviewing iPhone apps, and as reviewers become more senior, they are trained to evaluate apps with in-app purchases, subscriptions, Apple Watch and Apple TV.

The department has over 300 reviewers and is based out of a pair of offices in Sunnyvale, California, not Apple’s famous Apple Park campus or its older headquarters, Infinite Loop. Lots of reviewers are fluent in non-english languages, and some teams in the division specialize in individual languages. Apple says its reviewers speak 81 different languages.

App Review is organized under the marketing umbrella at Apple, and always has been, even before Schiller took over the greater App Store marketing and product departments in late 2015. Although Schiller is involved in decision-making through the ERB, people who worked at the App Review office said that he rarely if ever visits the office where the review takes place.

Instead, day-to-day oversight mainly falls to Ron Okamoto, a VP at Apple, and a director who joined Apple when it bought TestFlight in 2015, who CNBC is not naming because of security reasons. Reviewers say they sometimes receive feedback from developers that can be threatening.

App Review was developed shortly after the iPhone App Store was launched in 2008. Apple’s two goals for the department, according to an response to the FCC in 2009 and the webpage published earlier this year, is to create a store where customers can be confident that apps are safe, and to provide a level playing field for developers to reach customers, in exchange for a 15% to 30% cut of sales.

Reviewers “claim” a batch of apps through a web portal on a Mac desktop, called App Claim, then they often examine the app on an attached iPad, even if it’s an iPhone app, although there are stations for reviewers to evaluate Watch and TV apps on those devices. (Some developers have said they were surprised to see iPad screenshots of their iPhone apps in their logged communication with App Review.)

Reviewers compare the app to Apple’s public App Store guidelines, including making sure it runs without crashing and isn’t full of illegal content. Then the reviewers make a call whether to accept, reject or hold the app. Most reviewers only spend a few minutes per app, but many apps are simple and only require a short period to evaluate, the people said.

Reviewers have daily app quotas between 50 and 100 apps, and the number of apps any individual reviewer gets through in an hour is tracked by software called Watchtower, according to screenshots seen by CNBC. Reviewers are also judged on whether their decisions are later overturned and other quality-oriented stats.

People who worked at App Review said that work days could be long and that there were periods, such as ahead of Apple’s annual release of its new version of iOS, when app developers update their apps to so they’re compatible.

One stat that is closely tracked at App Review is called SLA, which stands for service-level agreement. Apple aims for 50% of apps to be reviewed within 24 to 48 hours. When there’s a big queue of apps, the SLA percentage drops.

On July 30 last year, the SLA fell to 6%, according to a staff email. “Until we catch up, we are opening up 12-hour days,” according to the email seen by CNBC. “Please note that you should not work over 12 hours in one day.”

Apple declined to comment on its app review process.

Reviewers generally don’t face horrific or illegal content on a regular basis, although one reviewer said that one time that they discovered child pornography in a pending app. The app wasn’t approved and the incident was reported to the FBI, the reviewer said.

The bigger concern is that developers can get angry that their livelihood can be threatened by a prolonged review process, and some reviewers wish they could share more details or help more beyond the boilerplate responses they are required to send.

Another reviewer said that sometimes they approve what looks like a valid app, but changes can be made on the developer’s server to make it into a scammy app that violates Apple’s guidelines. Sometimes reviewers get dinged for that, the person said.

What happens when an app gets rejected

Forty percent of apps or updates submitted to Apple are rejected, the company says. Many of those are subsequently approved after minor changes, but others present a more difficult decision for App Review.

Developers who disagree with a decision made by App Review can appeal to a board called the App Review Board, which can change the decision from a lower-level reviewer, and is partially comprised of reviewers with good track records. Sustained appeals can bring an app in front of the Executive Review Board.

The vast majority of iPhone apps are rejected for common reasons — they’re scammy, or they have bugs or they violate user privacy. A lot of rejected apps are related to a Chinese gambling scam called “PK10,” or other obviously fraudulent submissions, according to people familiar with the process.

But some rejections either fall into gray areas in Apple’s policies, or they are publicly sensitive, and those go to the ERB, which includes Schiller and other VPs with responsibilities at the App Store. The executive review board has been meeting since 2009, according to Apple’s letter to the FCC.

The apps handled by the ERB are sometimes apps that could be dangerous for Apple in terms of publicity, or “oh s—” apps, according to a person familiar with the process.

One notable app that was handled at the ERB last year was the Infowars app, according to people familiar with the situation. The conspiracy theory-broadcasting app was banned last year because it published videos that included threats at reporters. The App Review team had a staff meeting after that decision was made last year, a reviewer said.

When a decision is overturned on appeal, or a rejection needs to be explained, somebody at Apple calls the developer. Apple says it makes 1,000 calls per week to developers. Many developers, especially those who have gained public attention for their complaints about App Review, are contacted by a longtime Apple veteran who identifies himself as “Bill,” who doesn’t offer a last name, and who CNBC is not identifying due to security reasons.

Companies like Spotify or Netflix don’t get special treatment, one reviewer said, with the same App Review process and rules applied to their apps, despite their size. For example, Bill called Spotify when an update was rejected because it was emailing customers asking them to pay Spotify directly to circumvent Apple’s cut, according to a person familiar with the situation.

Bill also made calls related to the parental control apps that publicly complained about App Review treatment, according to a developer who received the call.

Ultimately, at Apple, all the apps are reviewed by actual Apple employees, and decisions do go all the way up the chain to Schiller.

Bill was recorded making an appeal call in 2016 by an angry developer. In the recording, Bill asks the developer, “Are you familiar with Phil? This is coming from Phil Schiller.”

Why the world’s supply is drying up
Musk’s flamethrower incenses New York lawmakers as Senate tries to ban weapon
To Top
error: Content is protected !!
Top