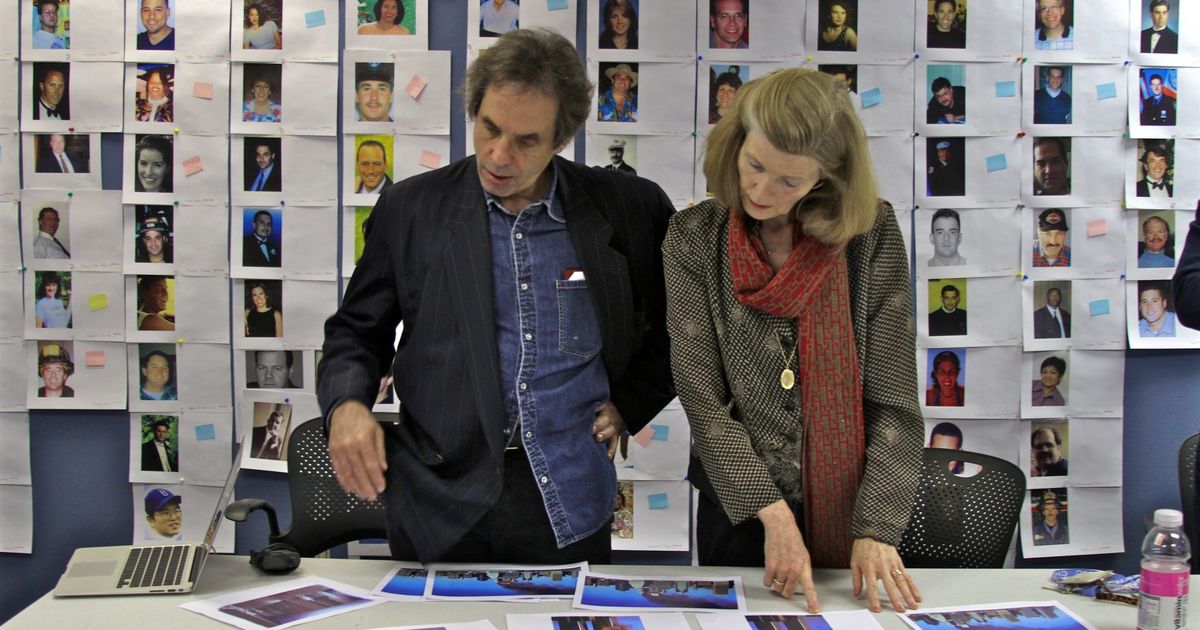 Michael Shulan, Creative Director, and Jan Seidler Ramirez/ Chief Curator & Director of Collections, Nation September 11th Memorial and Museum, reviews photographs of victims that will be included in the Memorial

In the documentary The Outsider—the first film to have its online ticketed premiere on Facebook—the creation of a museum devoted to the attacks on the World Trade Center in New York on 11 September 2001 comes with challenges and inevitable missteps. Part of that task was determining what the mission of such an institution should be, still a matter of debate today. Anything but a celebratory museum documentary, the film is viewable on Facebook on Thursday, 19 August for just $3.99, and airs again the next day. Distributed by Abramorama, which also helped bring Banksy’s Exit through the Gift Shop (2010) to theatres in the US, The Outsider will be shown on major platforms and some theatres before the 20th anniversary of the attacks next month, says co-director Steve Rosenbaum. The National September 11 Memorial and Museum opened in 2014. Politicians celebrated the $500m project backed by a foundation headed by New York’s billionaire mayor Michael Bloomberg. But the families of those who died in the attacks have generally stayed away from it. In 2019, the last full year it was open, the museum had 3.1 million visitors, a spokesperson says—about as many as New York’s Museum of Modern Art gets in a good year.

The film’s protagonist is the museum’s first “creative director”, Michael Shulan, who was hired after organising Here Is New York: A Democracy of Photographs, a no-budget crowd-sourced show of photographs taken on 9/11 which was displayed in a Soho storefront in 2002. Shulan had never worked in a museum before. Acerbic, with a reflex for the flippant remark, Shulan was anything but a conventional museum administrator. He seemed selected by the museum’s director, Alice Greenwald, to disrupt things. “One of the conditions I laid down… was if we’re going to make this museum, we’re going to tell the story of what actually happened,” Shulan says in the film.Rosenbaum, who co-directed The Outsider with Pam Yoder, says Greenwald hired Shulan to make the documentary “to create some dissidence, and initially for very healthy reasons.”

The film-maker Steve Rosenberg shooting as the museum was under construction, with one of the bent trusses from the destroyed Twin Towers behind him

The film-makers watch disagreements emerge between the rest of the staff and Shulan, who ended up leaving the museum the day it opened. The institutional side ultimately prevailed over an outsider, Rosenbaum says. After 9/11, Rosenbaum added, “the damage to the city was both psychological and economic, in addition to there being a massive hole in New York, in property tax. There was all this pressure to get it fixed. Historians would have said, ‘Wait, let’s not build a memorial yet because we’re not quite sure what we’re memorialising,’”  “Unfortunately, because of the real estate, that wasn’t an option. The city needed to be back in business and they needed all those tall buildings to be built. And they needed the memorial to be respectful, but also not gloomy,” he says.

“I had at least three people tell me, it couldn’t have been a cemetery,” Rosenbaum says, “even though literally it kind of was a cemetery.” Besides presenting exhibitions and displays about the attacks and their impact, the museum has a repository for the unidentified remains of 9/11 victims. A museum spokesperson called Rosenbaum’s perspective “ideological”.This spring, after museum leaders saw the film, Rosenbaum says their lawyers demanded the removal of “defamatory” scenes, which a museum spokesperson described as “disrespectful”. These include the audio of an anguished woman calling 911 from the 83d floor of 2 World Trade Center, video footage of people whom the staff called “jumpers” leaping to escape the burning towers, and discussions in museum meetings about displaying pictures of the hijackers and selecting items to be sold at the museum’s gift shop, which all remained in the final cut. Museum executives defend the gift shop on screen as a source of revenue. In the film, victims’ relatives call it crass. “They feared exactly what we knew… which was that the museum’s treatment of it was more economic than honourable,” Rosenbaum notes. “The reason the gift shop took such heat and continues to, by families, is because it was looked at [by the museum] through an economic lens.”

Rosenbaum calls the museum’s demands for cuts in the film an effort at censorship: “We spent six years making a film about how the sausage is made. What did you think we were making? We weren’t making a promotional film.” Both sides note that the museum had no role in making or funding the documentary. As it took shape, The Outsider was not always a feature documentary with Shulan as its protagonist. Until a year ago, the story was a non-fiction series that followed five characters. “We spent about a year negotiating with Netflix, first it was eight hours, and then it became six,” Rosenbaum says. Netflix rejected the project on 10 September 2020. “Literally at 11:59, they emailed, ‘We’re passing,’” he recalled. Facebook then stepped in. Despite differences between the filmmakers and the museum, the two parties have a future together. Rosenbaum and Yoder donated an archive of some 500,000 video images to the museum, “one of the biggest gifts of digitised moving imagery to the collection,” a museum spokesperson says.

The atrium of the National September 11 Memorial and Museum, with the Last Column, a steel beam from the buildings that was marked by first responders and recovery crews

Ancient history? Worcester University to close its archaeology department in another blow to heritage sector
Frieze Art Fairs return to Regent’s Park in October—so what has changed since 2019?
To Top
error: Content is protected !!
Top