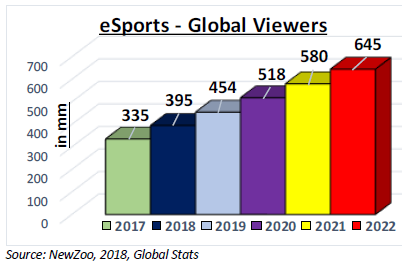 The world of competitive video games is coming out of “stealth mode” in the United States, analysts at Needham say, and the firm believes investors should pay attention to how its growing popularity will drive future profits.

Known commonly as esports, the category is essentially defined as people competing in a video game with a live audience, who is either at a venue or online. While both esports viewership and video gaming in general have grown, Needham analysts Laura Martin and Dan Medina wrote in a note to investors that the category has changed recently. That change has come through the U.S. popularity of the video games Fortnite and Overwatch, which the firm said “unmasked” the category’s “economic power in 2018.”

“Why have you never heard of eSports? Because zero of the top 30 earning players in the world were from the US in 2018,” Martin and Medina said. “Also, the top 10 professional players earned $1-2mm each in 2018, well below other professional US athletes.”

But the analysts argue that Fortnite and Overwatch are changing that, citing recent data on playing time and viewership.

Investors can gain access to the growth of esports through several public companies in the video gaming and esports segments. Needham pointed to Activision Blizzard and Electronic Arts – two companies the firm has each given a buy rating.

Needham also cited a recent survey that of esports viewers, which found there were 63 million U.S. viewers last year. That’s in line with viewership of the National Basketball Association (NBA).

The analysts argued that esports are not a fad, citing the rise in scholarships at U.S. colleges, increase in purpose-built stadiums, rising investment, viewership growth and even the potential for esports to be added to the Olympics.