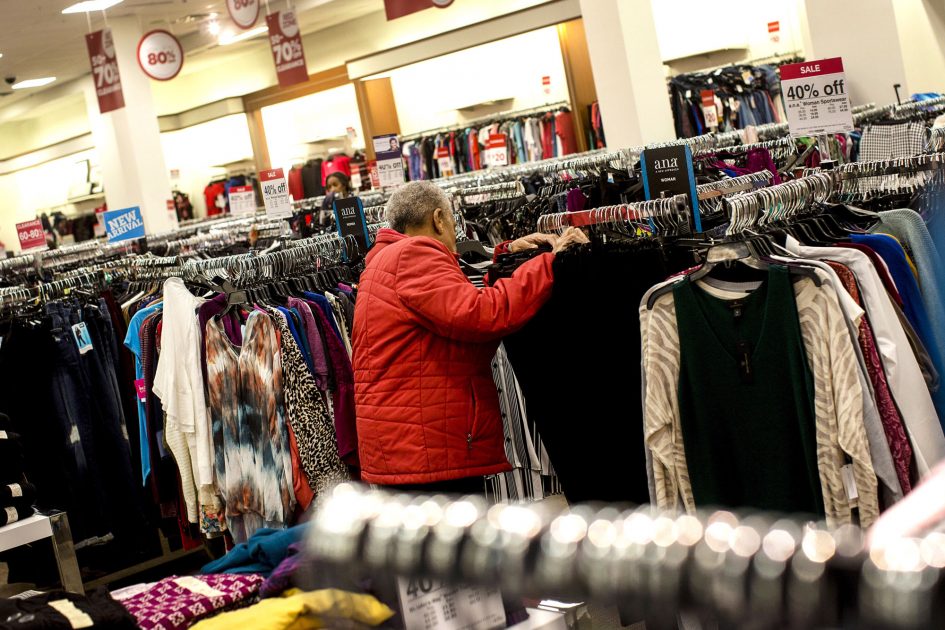 A woman shops for clothing at the JC Penney store in Garden City, New York.Saul Martinez | Bloomberg | Getty ImagesIn a bid to boost sales, J.C. Penney said Tuesday it plans to launch an outdoor shop, selling apparel and other excursion gear in 100 of its roughly 830 department stores next month.The company also announced the launch of an in-house brand called St. John’s Bay Outdoor, which will be in 600 Penney stores and online beginning Sept. 12. It will include woven shirts, jackets, vests, waterproof pants and other gear for men transitioning from exploring the outdoors to “a night out in style,” according to the company.Michelle Wlazlo, a chief merchant for Penney, said the department store chain is leaning into this category as “America spends more time outdoors.””With this expansion, [Penney] is taking part in the nearly $900 billionoutdoor recreation industry by offering functional, durable apparel with our customer expectations at the core, all at an incredible value,” she said in a statement. Prices for the St. John’s Bay Outdoor line will range from $11.99 to $44.99.This new strategy from Penney comes as the embattled department store chain is struggling to boost sales, which fell 7% in the latest quarter. Fewer shoppers are seeking out department stores at the mall to buy clothing, shoes and home goods. Penney has also struggled to select the right assortment of inventory.The company has tried things to excite customers in the past, like bringing in pint-sized Sephora makeup shops and running hair salons. More recently, it partnered with ThredUp to sell secondhand clothing. But some efforts have fallen flat. The company recently exited its appliance business to focus on core categories like women’s apparel. CEO Jill Soltau said in July that Penney was testing a slew of other things in Texas, where the company is headquartered, before moving ahead with a national rollout.In Penney’s new outdoor shops, which are set to open in 100 stores on Oct. 4, the company also will have merchandise from three new national brands: denim-maker American Threads, and performance-wear companies The American Outdoorsman and HI-TEC. It said the shops will be about 800 square feet. They will also include some of the other brands Penny sells, including Puma, Nike and Adidas.With investors doubting the company’s future, Penney shares have lost more than half of their value from a year ago and are currently trading under 90 cents. The stock was trading above $11 back in 2016.Penney received a notice from the New York Stock Exchange last month saying it was no longer in compliance with listing rules, with Penney’s stock trading below $1 for 30 days consecutively. The letter said that Penney has six months to regain compliance.Penney, in a filing with the Securities and Exchange Commission, then said it plans to pursue a reverse stock split by its next annual meeting, which is scheduled for May of next year.