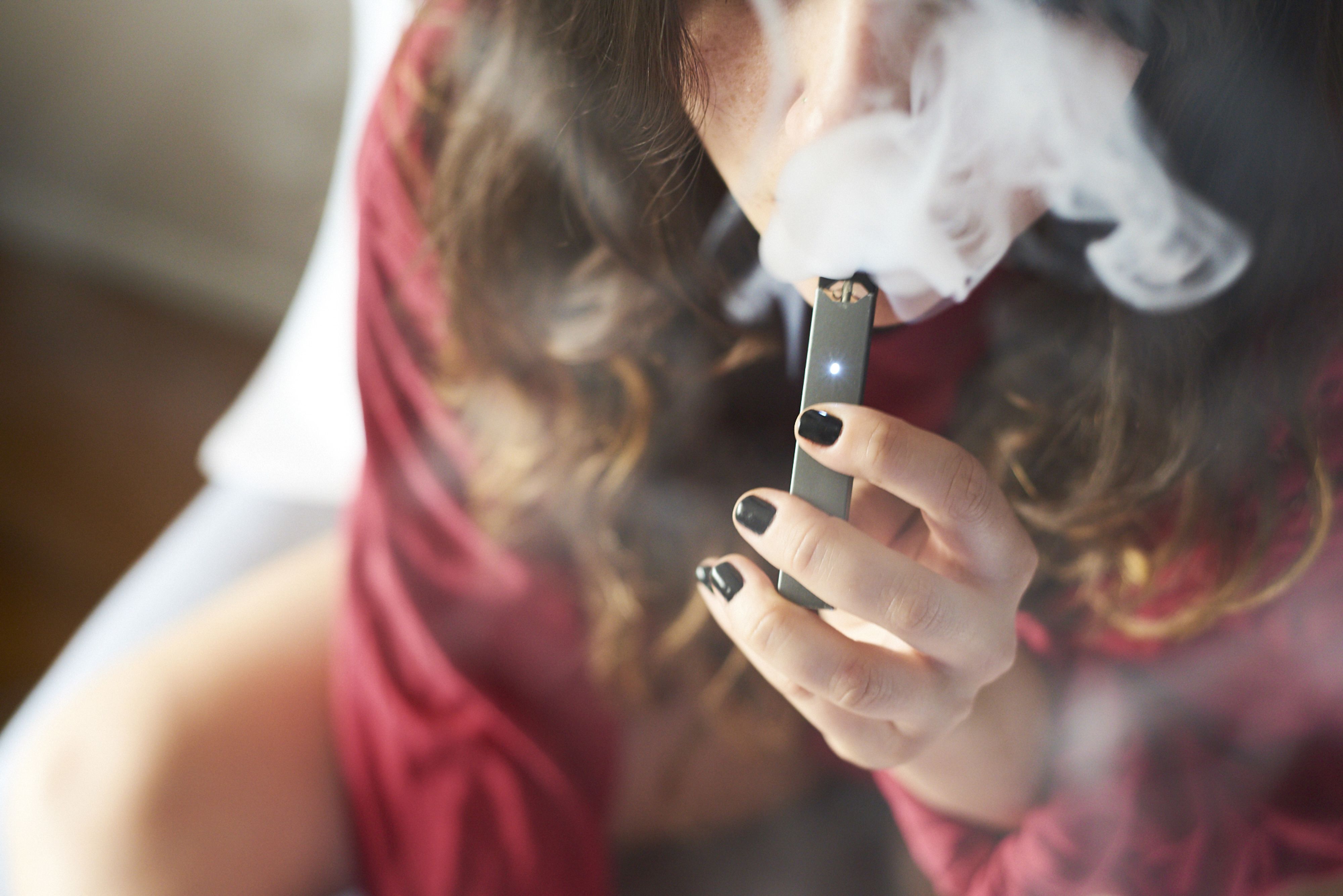 A person smokes a Juul Labs e-cigarette in this arranged photograph taken in the Brooklyn, New York.

The study, which is being presented in Poland on Friday, found about 99% less formaldehyde and carbon monoxide in the air exhaled by e-cigarette users than by traditional smokers.

“These products pose substantially less risk when it comes to secondhand emissions than cigarettes,” Dr. Josh Vose, vice president of medical and clinical affairs at Juul, said in an interview. “There are roughly 50,000 people that die every year in the U.S. from exposure to secondhand smoke, and this could potentially help bend that curve.”

The study, which was limited to 30 participants and conducted by a third-party lab, is being presented by Juul at the Global Forum on Nicotine in Warsaw. The trial is one of the many medical studies Juul is commissioning as it prepares to apply for approval from the Food and Drug Administration in 2022. Vose said Juul, which paid for the study, has seven clinical trials underway.

Juul is facing increased scrutiny over the company’s marketing practices as teen use reaches epidemic levels. It’s also come under scrutiny for an ad campaign that encourages adult smokers to “make the switch” to its nicotine pods, even though there’s no data supporting their ability to help people quit or on the impact from long-term use.

The research is intended to help allay some of those concerns.

“We have a very deep and broad research group and research portfolio and this result adds to the other results that we’ve produced thus far, ” Vose said. “So, we’re producing a steady cadence of evidence that, you know, is held to the standard of empirical study design, peer review and then ultimately to publication in scientific journals. That helps establish the impact of these products.”

In the study, researchers tested 30 adult smokers who said they smoked at least 10 cigarettes a day. The participants were divided into three groups of 10 and assigned to three different environments: residential, office and hospitality spaces.

The groups used one of three products — a Juul, a Vuse Solo e-cigarette and traditional cigarettes — for four hours in each of the environments. The area’s air quality was assessed before they vaped or smoked and after.

Researchers analyzed the chemicals exhaled after participants took 10 puffs of a vape pen or cigarette. The results were compared with samples from sessions where the participants used sham products.

The authors of the study noted that various background chemicals in the surrounding environment could have factored into the results.