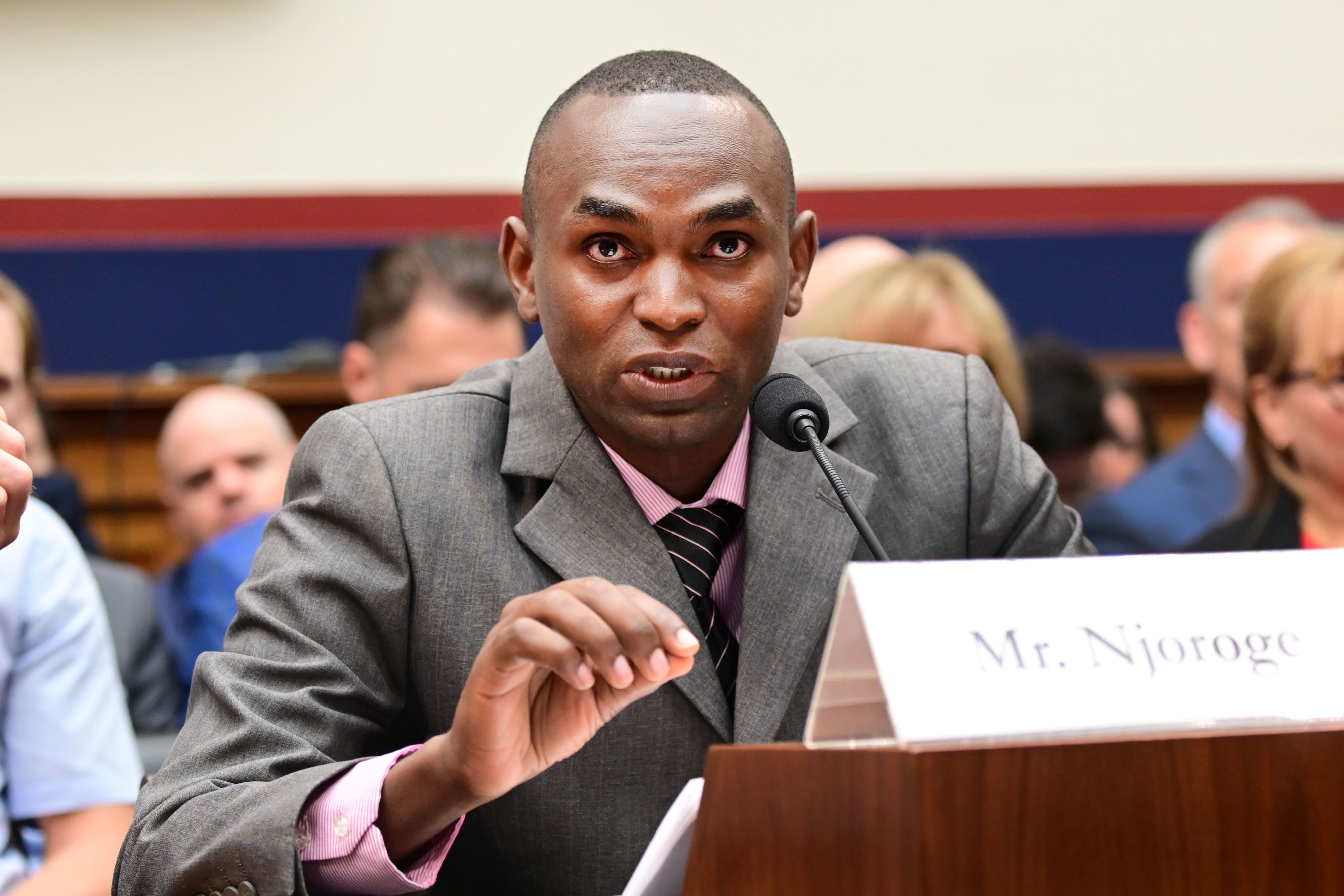 Paul Njoroge, representing the families of Ethiopian Airlines Flight 302, testifies before a House Transportation and Infrastructure Aviation Subcommittee hearing on “State of Aviation Safety” in the aftermath of two deadly Boeing 737 MAX crashes since October, in Washington D.C., July 17, 2019.

A man whose family was killed in the crash of a Boeing 737 Max in Ethiopia in March slammed the manufacturer and told lawmakers at a congressional hearing Wednesday to scrutinize the Federal Aviation Administration, which approved the now-grounded planes two years ago.

Paul Njoroge lost his wife, three small children and his mother-in-law on Nairobi-bound Ethiopian Airlines Flight 302, a Boeing 737 Max 8 that crashed minutes after takeoff from Addis Ababa, killing all 157 people on board. It followed the crash of another Boeing 737 Max, Lion Air Flight 610 in Indonesia, in October. All 189 people on that flight were killed.

The twin crashes prompted aviation officials around the world to ground the jets in mid-March. Investigators have implicated an anti-stall system in both crashes. Boeing has developed a fix for the software to make it less aggressive and give pilots greater control of the aircraft, a newer version of Boeing’s workhorse 737 that’s been flying since the 1960s. Regulators have not said when they will allow the planes to fly again.

The House aviation panel is hearing from Njoroge as well as well as union officials representing pilots, mechanics and flight attendants at its third hearing on the 737 Max crashes.

“I miss their laughter, their playfulness, their touch,” Njoroge said of his family in written testimony. “I am empty. I feel that I should have been on that plane with them. My life has no meaning. It is difficult for me to think of anything else but the horror they must have felt.”

Lawmakers have not yet questioned Boeing officials, engineers or whistleblowers, and Njoroge urged the House panel to do so.

Boeing is scrambling to regain public trust after the two deadly disasters. Earlier this month, it said it would provide $100 million to assist the relatives and communities affected by the crashes. That amount is separate from any damages Boeing may have to pay as a result of lawsuits. Just before the hearing began, Boeing said it would spend half of that $100 million on financial relief for the two crashes and that it has hired victim-compensation lawyer Kenneth Feinberg, who administered the fund to compensate victims of the 9/11 attacks and payments to victims of the Deepwater Horizon oil spill.

“Boeing has never reached out to families about the impossible sorrow and grief we will carry for our entire lives,” said Njoroge, who was born in Kenya and lives in Canada. “Instead they have a press relations strategy to apologize to cameras and propose half-baked promises to give $100 million to local governments and nonprofit organizations.”

When asked for comment on Njoroge’s charges, Boeing reiterated in a statement that it is “deeply sorry for the impact to the families and loved ones of those on board.

“These incidents and the lives lost will continue to weigh heavily on our hearts and on our minds for years to come. We are committed to working with the communities, customers and the aviation industry to help with the healing process,” it said.

Boeing and the FAA are facing multiple investigations into the plane and its certification. Njoroge told lawmakers to review the relationship between the manufacturer and its regulator. In the wake of the crashes, lawmakers have questioned the close relationship and a long-standing practice of using company employees to help certify the planes.