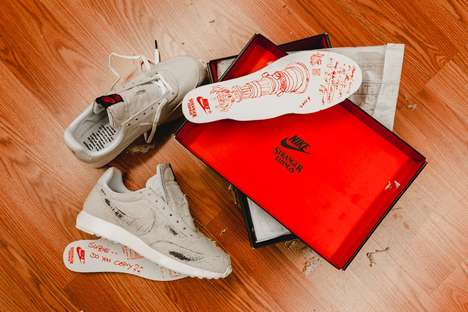 The Stranger Things x Nike collaboration launched ahead of the debut of the beloved Netflix Original’s third season. However, the two entities join forces once more for a new iteration of Nike’s Tailwind 79 silhouette and this one is sure to be of interest to sneakerheads who also identify as die-hard fans of the TV series.

The latest Stranger Things x Nike imagines the Tailwind 79, covered in a grey fabric layer that can be burned away to reveal secret show-inspired motifs. From logos on the back of the heel to messages underneath the soles, this model is an adventure in-and-of-itself. Some of the design motifs are translated in Russian, as well, offering a bold reference to the happenings in the latest season.

The Stranger Things x Nike collaboration is set to drop exclusively at BAIT in August.