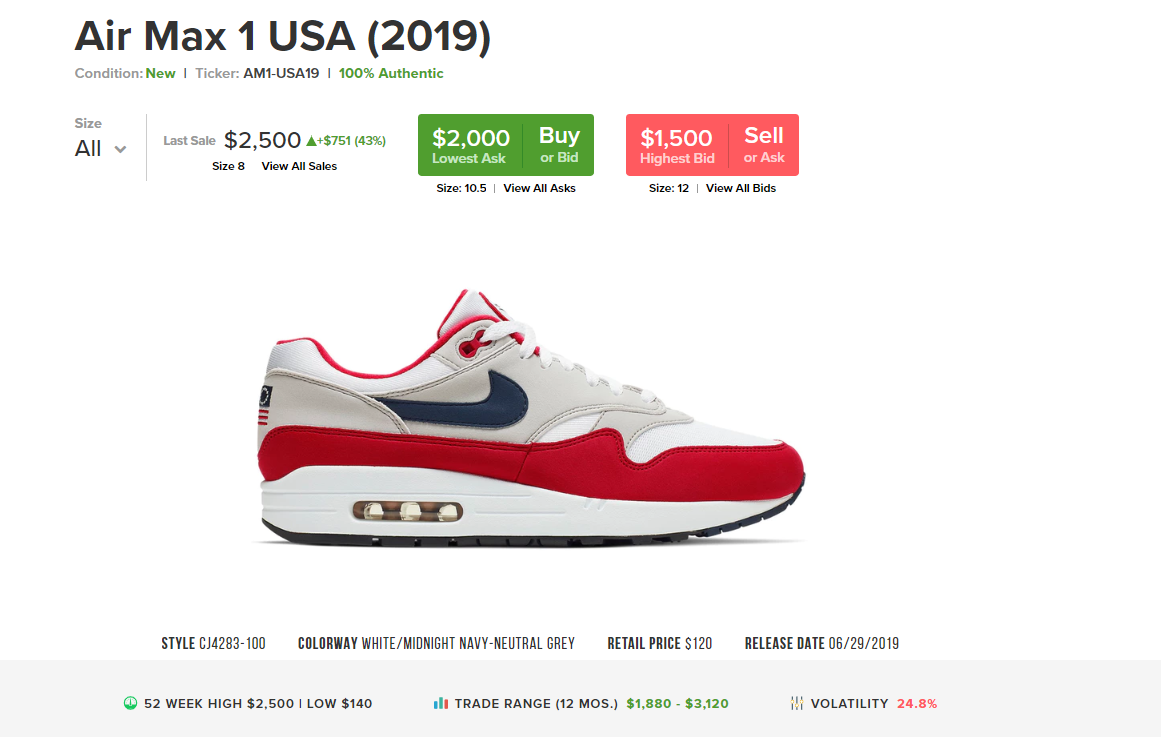 Nike pulled sneakers embellished with the controversial “Betsy Ross flag” from its apps and website. But on Tuesday morning, you could still get your hands on them for a pretty penny on StockX — at least before the auction platform stopped selling them, too.

StockX CEO Scott Cutler said on his Twitter account Tuesday afternoon that the Air Max 1 USA was being pulled as “the sale of this product on our platform does not align with our value system.”

The red-white-and-blue sneakers, shipped to retailers in preparation for a Fourth of July-week launch, were originally priced at $120, according to StockX’s website. By Tuesday morning, a pair was fetching as much as $2,500 on StockX, when they couldn’t be found elsewhere.

Nike pulled the sneakers featuring an early American flag on the heel after former National Football League player Colin Kaepernick, a Nike endorser, told the company it shouldn’t sell a shoe that he and others consider offensive, The Wall Street Journal reported Monday evening, citing people familiar with the matter.

Nike’s Air Max 1 USA sneakers with the ‘Betsy Ross’ flag were selling for over $2,000 on resale site StockX.

The Journal reported that Kaepernick contacted Nike officials saying he and others felt the flag — featuring 13 stars in a circle — is an offensive symbol because it is linked to a period of slavery. Others have said the flag has been adopted by some extremist groups.

“Nike has chosen not to release the Air Max 1 Quick Strike Fourth of July as it featured an old version of the American flag,” a Nike spokeswoman told CNBC.

Items such as shoes and watches are sold on StockX either at the seller’s asking price or at the highest bidding offer. As of 9:20 a.m. ET, 66 pairs of the Air Max 1 USA had been sold on StockX, the website said. Multiple pairs in various sizes were selling for more than $1,000.

StockX’s website says its “experts authenticate every product sold on StockX” and items are shipped within two business days. The Air Max 1 USA product started to appear on the auction platform ahead of the shoe’s scheduled release to the public.

Nike shares were down about 1% Tuesday afternoon and have rallied 14% this year, bringing the retailer’s market cap to about $133 billion.