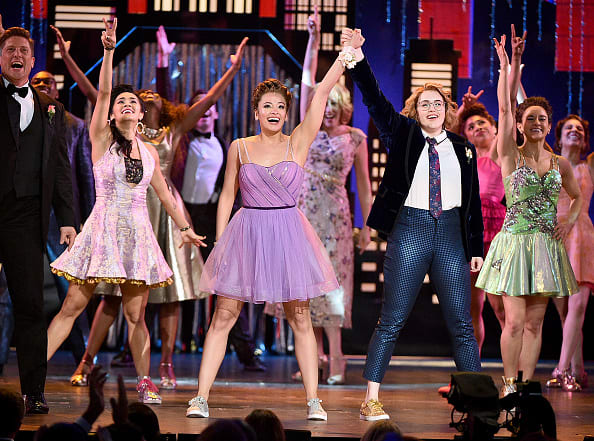 Isabelle McCalla, Caitlin Kinnunen, and the cast of “The Prom” perform during the 2019 Tony Awards at Radio City Music Hall on June 9, 2019 in New York City.Theo Wargo | Getty ImagesJust over a year ago, Caitlin Kinnunen was sitting in Radio City Music Hall shoulder-to-shoulder with the biggest Broadway stars, listening to her name read as a Tony nominee for best leading actress in a musical. This spring, Kinnunen found herself out of work as an actor after the Covid-19 pandemic forced a shutdown of professional theaters. The 29-year-old ultimately boxed up her New York apartment and drove across the country to move back into her parents’ home in Washington. Now, she faces a new threat: losing her health insurance. Kinnunen and many professional stage actors earn their coverage by working a certain number of weeks each year. But with Broadway and almost all theaters across the country dark until the at least May 30, it has become impossible to find work that would enable them to qualify. As a result, thousands are expecting to lose health insurance. Kinnunen has the added plight of living with Type 1 diabetes. “How am I going to live? How am I going to afford to live? Should I just find a career that will give me health care so I can have the life I have built up until now continue?” Kinnunen said in an interview with CNBC.Kinnnunen said she has able to stay on her union-sponsored insurance until April, at which point she will be kicked off because there are no contracts to be signed. According to her union, Actors’ Equity, at the end of October 2019, its members accumulated about 265,000 work weeks that year. This year, the number of work weeks has plummeted by 65 percent to about 92,000 — including nearly three months of normal work before the shutdown. The lack of work weeks is pushing somewhere between 200 and 300 union members off their health insurance a month, Actors’ Equity told CNBC.Health fund reserves plummet”If all the contracts go away because nobody can actually go into the physical spaces, then no one’s able to accumulate work weeks,” said Kate Shindle, president of Actors’ Equity, which represents professional performers as well as stage managers. “So we have a lot of people who are very afraid of what’s going to happen to their health care.” The shutdown has depleted the coffers of the Equity-League Health Fund, an independent entity managed separately from the union. The fund is financed 88 percent from employers, such as producers and theater owners. The remainder consists of investment income and premiums paid by participants. Manhattan’s theater district after Broadway shows announced they will cancel performances due to the coronavirus outbreak in New York, March 12, 2020.Andrew Kelly | ReutersBut employer contributions largely dried up when theaters shut down. The health-fund expects its reserves to go from $120 million pre-Covid down to $30 million by the middle of next year if theaters don’t largely reopen. To avoid completely draining the reserves, the health fund changed the threshold for members to receive coverage as of Jan. 1. Instead of working 11 weeks for six months of coverage, members now have to work 12 weeks for a lower tier of coverage and 16 weeks or more for the same coverage as before but with higher deductibles, copays and out-of-pocket maximums. It was a move that the union itself publicly criticized. “We all understand that there is no escaping the devastating loss of months of employer contributions nationwide, and no alternative aside from making adjustments to the plan,” Shindle said in a statement when the changes were announced Oct. 1. “But I believe that the fund had both the obligation and the financial reserves to take the time to make better choices.” Running out of optionsThose who have already lost coverage are pursuing several backups. Many are now qualifying for Medicaid because their income has dipped low enough. Others are opting to pay for COBRA, which allows them to stay on the same plan but in many cases, pay somewhere between $1,000 and $3,000 out of pocket each month. Some are switching to marketplace plans through the Affordable Care Act. On Tuesday, the Supreme Court heard arguments in a case seeking to overturn Obamacare. But several of the court’s conservative justices appeared unwilling to strike down the legislation.Kinnunen plans to switch to a marketplace plan if that’s still an option by April. Going without health insurance, Kinnunen said, would be too expensive.Out-of-pocket costs for a diabetic — insulin, test strips for the glucometer, a wearable device to monitor her glucose levels, and other supplies — amounts to upwards of thousands of dollars a month, she said. “If I didn’t have insurance, my health-care costs would be insurmountable,” Kinnunen said. “It’s not just like, oh I’m spending this money on things that just make my life easier. No, I’m spending this money on things that truly keep me alive.” Another option is on the table in Washington. Several U.S. senators in September proposed the Worker Health Coverage Protection Act, which would allow workers who are unemployed or furloughed due to the pandemic to access subsidized COBRA coverage to keep their health insurance. Actors’ Equity came out in support of the bill, but it’s in limbo amid stalled stimulus talks. Despite being a Tony-nominated actress, Kinnunen said the uncertainty over health care has made her consider leaving the industry altogether. She’s taking an online course at New York University to expand her prospects. But like so many in the industry, Kinnunen sees theater as a calling. “We do it because we’re passionate about it, and it’s important to us,” she said. “So to ask, just go do something else? It’s not that easy. It hurts.”

Biden puts health care front and center with a call to expand Obamacare
German health minister says it’s too early to tell if its partial Covid lockdown will be extended
To Top
error: Content is protected !!
Top