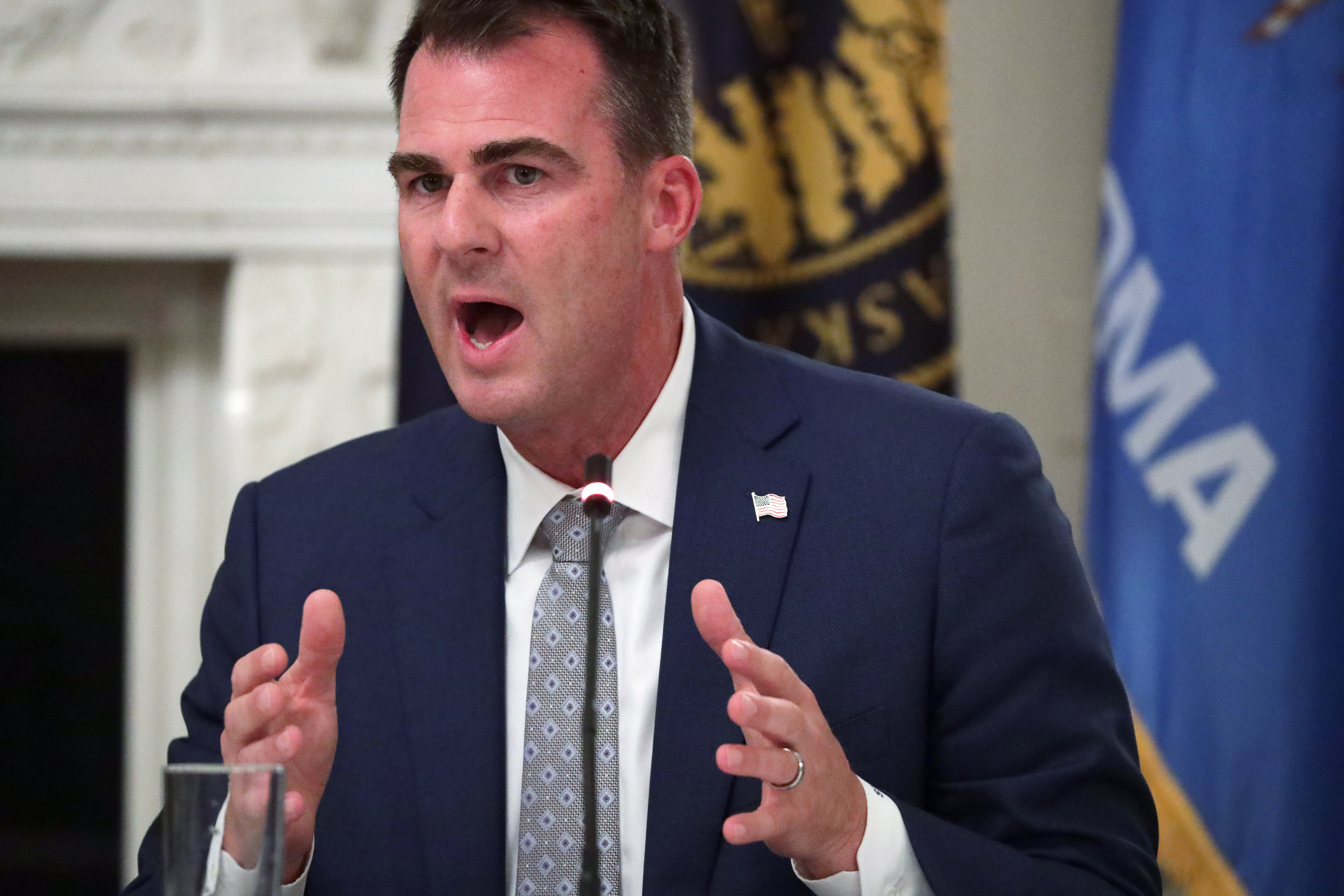 Governor Kevin Stitt (R-OK) speaks during a roundtable at the State Dining Room of the White House June 18, 2020 in Washington, DC.Alex Wong | Getty ImagesWASHINGTON – Oklahoma Gov. Kevin Stitt announced Wednesday that he has tested positive for coronavirus, becoming the first governor since the start of the pandemic to publicly announce a positive diagnosis. “I got tested yesterday for Covid-19 and the results came back positive.” Stitt told reporters. “I feel fine; I felt a little bit achy yesterday.”The Republican governor said he is currently isolating from his family and working from home. He resisted calls to roll back Oklahoma’s current reopening plans, which are being tested by a viral resurgence. “Going back and bunkering in place doesn’t remove” the virus, Stitt said, adding “It’s way way premature to think of slowing down or backing up” the reopening.Stitt is one of several Republican governors around the country who have been especially vocal in questioning whether coronavirus safety recommendations from public health experts are really necessary.visit to the White House for an event to showcase governors who were moving quickly to reopen businesses, Stitt boasted that Oklahoma was one of the first states to reopen. “We have to learn how to be safe and to move on,” said Stitt. Later in the month, with cases in Oklahoma already rising a second time, Stitt answered a question about a possible mask mandate by saying, “I’m always reluctant to mandate things.” Instead of adopting strict public health measures, Stitt has said Oklahomans will “just have to learn how to live with” the deadly coronavirus.The phrase “learn to live with it” has gained popularity during this latest spike of coronavirus cases, as a sort of alternative theory to aggressive public health action. Repeated by Trump and other Republican governors, the phrase reflects a hands-off approach to government intervention aimed at stopping the spread of the virus. As of Tuesday, Oklahoma had 20,245 confirmed cases of coronavirus and 441 deaths from Covid-19, according to data from the Centers for Disease Control and Prevention.Stitt’s diagnosis came several weeks after President Donald Trump held a controversial campaign rally in Tulsa, where Stitt was photographed without a mask alongside thousands of the president’s supporters all in close proximity, despite warnings from local health officials that the event could lead to a surge in Covid-19 transmission.Herman Cain, another high-profile Republican who attended the rally, tested positive for the virus on July 1, less than two weeks later. Two days after his diagnosis, Cain’s symptoms became so severe that he was hospitalized. As of Wednesday, the 74-year-old former presidential candidate is apparently still fighting the disease in an Atlanta-area hospital.Cain had posted a photograph of himself at the Tulsa arena surrounded by other participants, none of whom appeared to be wearing masks.Nationwide, the virus has infected 3.35 million Americans, with just shy of 59,000 new cases reported on Tuesday. Deaths from Covid-19 recently topped 135,000, and another 351 Americans succumbed to the virus on Tuesday. These figures far exceed those of any other developed nation on earth. President Donald Trump has played a key role in downplaying the severity of the pandemic and pressuring governors across the country to reopen their states as quickly as possible in order to minimize damage to the economy.Trump is convinced that a full economic recovery is still possible before November, when voters choose between the incumbent president and his rival, former Vice President Joe Biden. Absent an economic recovery, Trump’s electoral prospects look very bleak. This is a developing story. Please check back for updates.

Trump says U.S. would have half the number of coronavirus cases if it did half the testing
Is it safe to visit the Maldives? Here’s what hotels are doing
To Top
error: Content is protected !!
Top