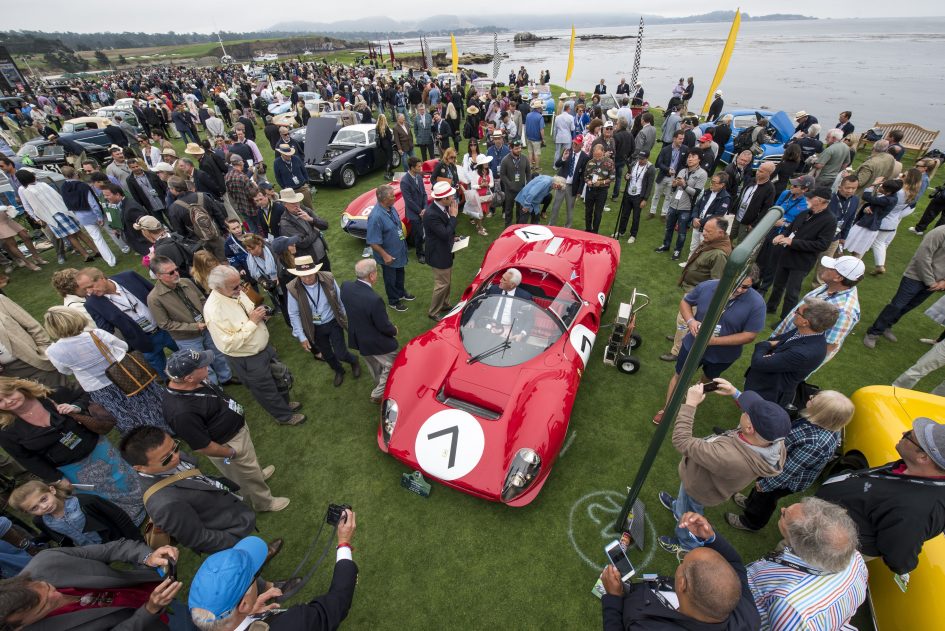 Routinely described as the world’s most popular, elegant and exclusive classic car show, the annual Pebble Beach Concours d’Elegance has spawned a ten-day burst of events that are meant to appeal to antique auto fans, whatever their personal preferences.

Thousands of people descend on the normally quiet Monterey Peninsula coast for what has come to be known as “Pebble Beach car week,” but it is not an event for those on a tight budget. Tickets for various events, such as “the Quail, a Motorsport Gathering,” can run into the hundreds, and even thousands, dollars.

“It’s expensive to come to the Monterey Peninsula, any time of year, but especially during car week,” said Ken Gross, an author, classic car event organizer and a long-time judge at the Pebble Beach Concours.

Simply getting to the Peninsula is expensive, whether you fly or drive. Gas in California is already among the most expensive in the country, and one stations along CA-1, the coastal highway leading up from Los Angeles, was commanding $5.89 for a gallon of the premium unleaded fuel that many high-performance models require. The average price for premium gas in California is $3.88 a gallon, according to AAA.

Finding a place to stay is the next headache. During car week, many hotels demand four-day minimum reservations while also punching up prices to astronomical levels. Quail Lodge Resort and Golf Club is getting as much as $1,800 a night for a standard room over the weekend, according to their reservations desk. Other times of the year that runs as little as $200 to $300.

“A cheap hotel around Monterey will cost $300 and a good one close to $1,000,” said Charlie Vogelheim, a regular car week attendee who found the local Embassy Suites asked for $989 – before taxes and fees. Even then, it only had one room left, as of Friday morning.

“People I know are staying as far as 60 miles away because they can’t find a room or because what they do find is just too expensive,” said Vogelheim, an automotive analyst.

The good news is that there are plenty of things to see once you do arrive in Pebble Beach, with more than a dozen car shows, auctions, driving events and the four days of classic racing at the Laguna Seca Raceway. Family members who aren’t gearheads can find plenty of other things to keep themselves busy, whether driving down the coastal highway or going to the aquarium in nearby Monterey.

But few things are free, especially for classic car fans. One of the smaller events, the Carmel Mission Classic, at Mission San Carlos Borromeo de Carmelo in Carmel-by-the-Sea costs $55  though it includes a wine tasting and souvenir glass. The Rolex Monterey Reunion starts at $170 for basic, four-day access, though the Flagroom pass jumps to $450.

To get into the Pebble Beach Concours will cost $375 for advance tickets, more at the gate. Entry to the Quail start at $950, though there’s a more exclusive, $2,500 Patron ticket.

“It’s worth it,” said Brenden Clay, of Dublin, California, who has been a regular attendee during Pebble Beach car week for a number of years. His own hotel, he noted, increases its price five-fold during the event, something he and friends cover by cramming into a single suite. “It’s a big jump,” Clay said, but something he would not miss.

“To me, good things in life don’t come cheap,” said Peter Borer, COO and executive director of the Hong Kong and Shanghai Hotels company, which runs the Quail Lodge. Demand has remained strong since the charity event, now in its 17th year, began and the alternative would be to increase attendance, changing its relatively relaxed character.

As expensive as it may be to attend car week, those who also want to display at one of the week’s events better plan out a hefty budget. Just getting a vehicle to Pebble Beach can cost thousands to hire a specialty transporter company specializing in exotic and rare cars, noted Concours judge Gross.

Then there’s the actual vehicle preparation that goes into a winning entry. While owners rarely discuss what they’ve had to put into a project, the word, “millions” is often quoted for vehicles that need major restoration work.

The cars that win on Sunday, however, see a significant increase in value, which Gross and other classic car specialists say can push into the millions for a best-in-show winner at the Pebble Beach Concours d’Elegance.