Puma is opening a massive store on Fifth Avenue. Here’s a first look 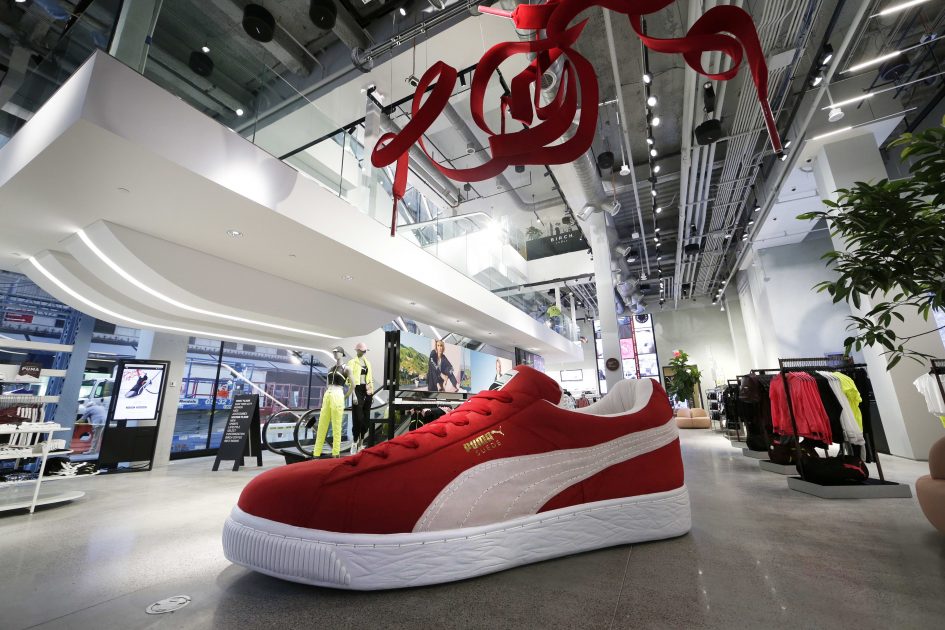 The massive 18,000-square-foot space, spanning two levels, marks Puma’s first bricks-and-mortar location in New York and the first of its kind in North America. It currently has a little more than 100 outlet stores in the U.S., but doesn’t have full-size or full-price locations. Instead, it’s been focused mainly on selling through wholesalers.

“I see this store as a commitment to the American market,” Puma CEO Bjoern Gulden said in an interview. “This location is to me another place to talk to the consumer.”

Puma says this store, located on the corner of Fifth Avenue and 49th Street, will feature its full breadth of assortment including basketball items, golf gear, motor-sport merchandise, kids, lifestyle and soccer. There will also be items on sale here that are only available at the New York store.

With this store, Puma joins other athletic apparel and sneaker retailers Nike, Lululemon, Aasics and Adidas with shops on Fifth Avenue. Under Armour has a new flagship still under construction in the neighborhood. Competition has only been heating up in the sneaker space, with more and more smaller brands trying to steal market share from the No. 1 player in the industry, Nike.

Puma has been pushing more of its lifestyle gear toward younger shoppers, with so-called athleisure wear being so popular in the U.S. It’s enlisted the help of movie star and singer Selena Gomez, who has her own collection with Puma, and rapper Meek Mill.

“Everything we do is rooted in sports, but I also want people to use it on the street,” explained Gulden, who spent years at Adidas before coming to Puma. “That market is a lot bigger than the true performance market.”

Puma is the eleventh largest athletic footwear brand in the U.S. year to date, according to the NPD Group’s retail tracking service, up one spot from last year.

“Puma, like many small brands, is growing faster than the market,” NPD group retail analyst Matt Powell said. “Small is the new big.”

According to Gulden, the U.S. is Puma’s largest market today, while China remains the fastest growing.

He said the company does about 24% of its sales direct to consumer, with the rest being wholesale. The new Fifth Avenue location should help boost Puma’s direct-to-consumer business, but the CEO says there’s no reason for Puma to ever be “DTC only.” He says a healthy mix for sales would be: 30% direct to consumer, 70% wholesale.

The store has a few interactive elements, including an F1 racing experience, where customers can get inside an authentic Mercedes or Red Bull F1 racing car in the store to compete in a simulated race through the streets of Manhattan. In the basketball area, there’s stadium seating in front of a TV wall, where shoppers can hang out and play NBA2K.

There are also “magic mirrors” throughout the store, where shoppers can take a full-size selfie and then try clothes and shoes on virtually.

The design on the outside of the store is meant to mimic the bottom of Puma’s iconic suede sneakers.

There is plenty of open space with room for people to browse or sit and hang out.

In addition to women’s and men’s, Puma has a section for kids downstairs.

Puma has multiple walls of sneakers throughout the store. Footwear is more than 50% of its business today.