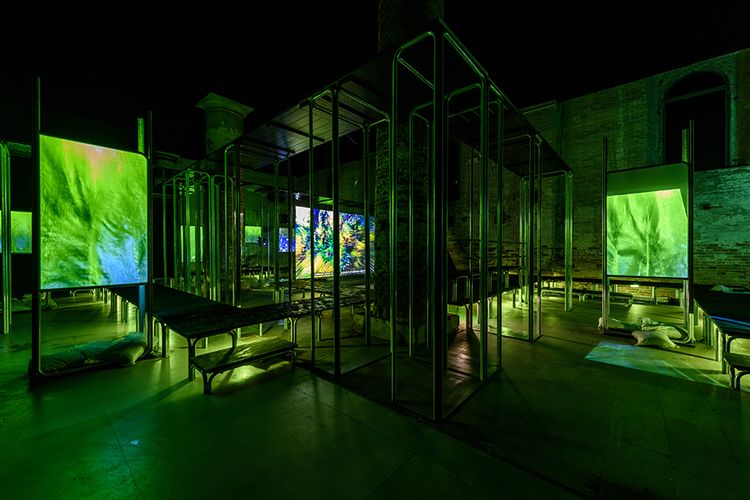 
Hito Steyerl’s This is the Future (2019) at the 58th International Art Exhibition – La Biennale di Venezia, May You Live In Interesting Times
Photo: AVZ Andrea Avezzù


“Entering the future is a massive health hazard.” So says the voiceover of Hito Steyerl’s This Is the Future, her digital video installation in the Arsenale, one of the two main Venice Biennale venues. The same could be said of the present as it appears in the artistic director Ralph Rugoff’s main show, May You Live in Interesting Times (until 21 November). Steyerl’s work satirises our current condition with her characteristic combination of post-structural analysis and pointed humour. An extension of her recent Power Plants project at London’s Serpentine Gallery, This Is the Future features multiple screens with trippily colourful, slowly morphing, futuristic plant forms. The narrator tells us that one of these sci-fi plants produces an extract that will “poison autocrats”.

This is emblematic of the best of Rugoff’s show—and there is much excellent work in it. Steyerl’s installation embodies the “multivalent… richly ambiguous” work Rugoff said he was looking for in his Biennale. It eloquently deals with what Rugoff established as his main theme ahead of the Biennale: the culture of fake news and alternative facts, of fictions as public narratives. For Steyerl, a biting take on contemporary corruptions and inequalities always goes hand in hand with the absurd and the sardonic, with playful storytelling and re-envisioned histories. In her second installation at the Giardini—the 79 artists and collectives present a different body of work in each of the Biennale’s two different venues—Steyerl’s installation, shown on four curved screens that enclose viewers, explores Leonardo’s designs for a submarine for Venice. But she links it to the arms manufacturer that has taken the Renaissance master’s name and uses his genius for weaponry and war machines to promote its activities. In the installation, Leonardo’s writings in his notebooks become the ripples and spume of the Venetian lagoon and canals.


“The regularity of these collisions surely cannot be happenstance; this is strategic chaos.”

Steyerl is rare among the artists in the show in that both her works are shown in their own discrete spaces. On several occasions in the Giardini presentation, I was taken aback by initially baffling combinations of artists. One room features a spare, cool, enigmatic sculptural assemblage of Nairy Baghramian at its centre, with the expressive figurations (themselves very distinct) of George Condo and Henry Taylor and the calligraphic abstractions of Julie Mehretu; elsewhere, Njideka Akunyili Crosby’s dense paintings of figures in interiors are put together with Carol Bove’s steel sculptures, paintings by Avery Singer and the photographs of Anthony Hernandez. These are visual cacophonies, with works hugely distinct in form and content. Were it one or two rooms you might think this was curatorial filling—“But where do I put this artist?”—but the regularity of these collisions surely cannot be happenstance; this is strategic chaos.

Rugoff told The Art Newspaper ahead of the Biennale that he had included works that embraced contradiction; the visual incongruity of these multi-artist spaces suggests that he has composed his exhibition in the same spirit. It is not just with the subject matter of his selections that Rugoff complicates easy readings, he does it with the visual associations he creates. And while the uneasy juxtapositions here do not destroy the power of the more fragile or subtle work as they often can, it still makes for some uncomfortable sensorial experiences.

“It is a way of looking at a biennial show that is new to me: each work might be accompanied by a memory of that experienced in the other venue.”

While the Arsenale features numerous moments of unexpected and jarring conjunction, it is much more steadily paced, aided by the elegant use of plywood partitions to break up the monotony of the columned 300m-long Corderie, the former rope-making factory which this part of the Biennale occupies. For the most part, though not exclusively, the artists show larger work here, as it is the more generous space.


Rugoff’s idea for artists to present two different bodies of work is often fruitful. It is a way of looking at a biennial show that is new to me: each work might be accompanied by a memory of that experienced in the other venue. It draws attention to the artists’ juggling of thinking and making, grappling with the balance of language and technology. Artists have inevitably been creative with Rugoff’s brief, adopting intriguing strategies. In the Giardini, for instance, Akunyili Crosby shows the paintings for which she is increasingly esteemed: her equivalent of grand manner portraiture, featuring friends and family in interiors with the insistent presence of collaged imagery beneath the main composition. But in the Arsenale, she shows close portraits of heads dominated by a single colour. The fundamental means of painting the figures is the same, but the conceptual underpinnings, the scale and format of the works make them hugely distinct.

Sometimes, the pieces shown in the two venues feel like two parts of one work, calling out to each other across the calles and canals between the Giardini and Arsenale: Teresa Margolles shows two found-object sculptural installations conveying the horror of violence in her native Mexico: the section of a school wall taken from the city of Ciudad Juarez—against which men were executed—is in the Giardini; and, in the Arsenale, glass shelters from the streets of the same city capturing its shameful recent history of femicide—they are covered in flyers, many fading and peeling, that seek out missing young women. The glass shakes to the sound of trains recorded by Margolles, as if they are on the brink of shattering.


Ed Atkins’s self-portrait drawings as a tarantula—scuttling across hands and feet—enigmatically punctuate the Giardini, appearing in several different spaces, while in the Arsenale, he shows a vast installation. Atkins’s Old Food involves multiple video screens with his motion-captured CGI figures, some historically dressed like figures from a Medieval video game. They are all, inexplicably, weeping. He also shows an absurd and hilarious film, complete with squelchy sound effects, in which we see a sequence of preposterous sandwiches being formed on white sliced bread—babies, lettuce and tomato, anyone? Nearby are racks of opera costumes and dense and complex texts, written by the website Contemporary Art Writing Daily and etched into wood. They tell us, for instance, that “Atkins’s protagonists are emotional crash test dummies… [with an] almost congealing sentience, like gym socks coagulating birth material”.

“Much of the other painting here is rather tepid. His choice of photographers, however, is strong.”

Rugoff made a point of emphasising the key importance of painting in the exhibition ahead of the Biennale but while Akunyili Crosby, Michael Armitage and Julie Mehretu are real highlights—proving that their work is growing constantly richer—much of the other painting here is rather tepid. His choice of photographers, however, is strong. A brilliant coupling of Zanele Muholi’s self-portraits—in which she explores the nature of identity with a sculptural playfulness, decorating her hair with scissors—for instance, with Mari Katayama’s similarly unflinching self-portraits exploring her disabilities, is one of the Giardini’s strongest rooms. Muholi is also a towering presence in the Arsenale, where her gaze repeatedly confronts you in vast wallpapered images.


Soham Gupta’s studies of the dispossessed people of Kolkata, with whom he collaborates so that they help dictate how they appear to the viewer, are deeply affecting, whether in black and white in the Giardini or in colour in the Arsenale. But the media in which Rugoff’s choices are almost uniformly knockout are video and digital art. Jon Rafman has been creating video-game-style epics for some time, but his two pieces here are the best I have seen. In one, groups of faceless figures are repeatedly and brutally destroyed and abused, another is like a stream of consciousness of dream-like absurdities, with a figure consisting of a child’s head on legs as its protagonist.

For me, the works that are the most resonant are those by Arthur Jafa and Kahlil Joseph. Both are filmic collages, using found and original footage. Joseph’s BLKNWS (2018) is a two-screen news channel of black—and mostly African American—life, from archive footage of Malcolm X and Miles Davis, through studio footage of the artist Henry Taylor and the collector A.C. Hudgins having an informal chat about the world today, to leading African American thinkers at public events, accompanied by a soundtrack featuring Frank Ocean and Sampha, among others. It leaps between the profound and political and the apparently humdrum and inconsequential are utterly compelling and often very moving.

Jafa’s White Album is similarly magnetically stirring, yet more troubling. It focuses on white supremacy and—alongside beautifully shot imagery of white people who are friends of Jafa’s—it features, among much else, YouTube footage of a young, racist YouTuber lamenting the lot of white people; the anti-racist rant of self-confessed former white nationalist Dixon White; a chilling sequence of a man repeatedly loading an automatic rifle and pistol; and CCTV footage of the white supremacist murderer Dylann Roof as he went to commit the Charleston church shooting in June 2015, in which he killed nine people. Again, music is a huge factor in the film, and it includes an extended sequence of the video for Oneohtrix Point Never’s The Pure and the Damned, sung by Iggy Pop, which is weaved in among other material. A CGI avatar of Pop appears singing this lament, and in it is the line: “The truth is an act of love.” It’s a devastating line, and one that speaks to the power not just of Jafa’s film, but to the broader message of Rugoff’s mightily impressive show.

• For all our coverage of the 58th edition of the Venice Biennale, click here

Venice Biennale 2019: the must-see pavilions in the Arsenale
Lithuania gets the coveted Golden Lion for best national pavilion in Venice
To Top
error: Content is protected !!
Top