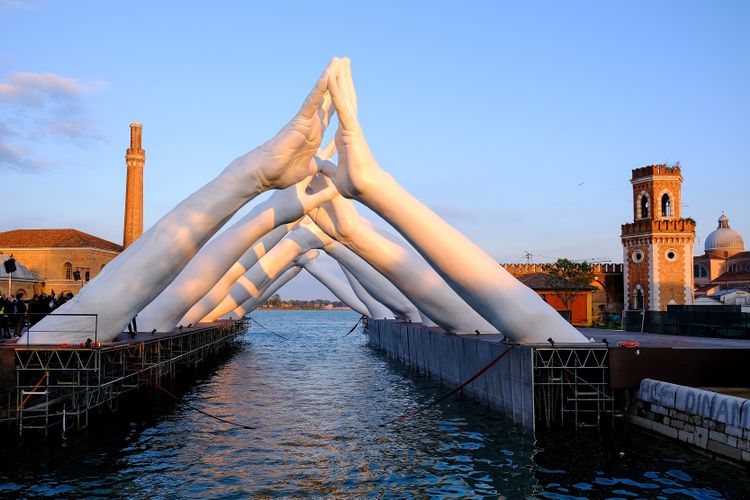 Yes, he’s back. The artist who gave us two enormous arms emerging out of the murky waters of the Grand Canal at the last Venice Biennale has returned to this edition with an installation of yet more arms, this time not just one pair but six, all soaring 40 feet upwards with hands meeting at the top, some clasped, some in prayer, to form a series of colossal arches. After all, if an idea worked the first time, why not repeat it but much, much bigger?


Lorenzo Quinn’s sculpture, Building Bridges, which is positioned at the end of the Arsenale just across the water from Ralph Rugoff’s Biennale exhibition and the Chinese and Italian pavilions, is meant to symbolise values such as love, faith and friendship. Quinn has said his inspirations are artists such as Michelangelo and Bernini, but his latest contribution to the Venetian cityscape owes less to the Italian Renaissance and Baroque and more to the over-literal gigantism so beloved of despots like Saddam Hussein. Think his Victory Arch in Baghdad. It is brought to us by London’s Halcyon gallery, purveyor of gaudy baubles to moneyed elites the world over. Which prompts the question: is Halcyon the worst gallery in the world? Possibly. Definitely top five.


Swords of Qādisīyah, Hands of Victory in Baghdad, Iraq

Building Bridges is just one spectacular example of the multitude of crappy installations and art shows that emerge in Venice every two years to coincide with the Biennale. No deconsecrated church, no empty palazzo is safe. Around every corner more bad art lurks ready to lure unsuspecting visitors with entirely spurious claims of association with the official Biennale exhibition.

Take the show entitled Pro Biennale, which includes the work of nearly 100 Italian artists across two venues, the Scuola Grande di San Teodoro and the Spoleto Pavilion in Dorsoduro. This is “presented by” Vittorio Sgarbi, former Italian minister of culture, polemicist and, inexplicably, the curator of Italy’s official pavilion at the 2011 Venice Biennale, the country’s worst in living memory.


There are unicorns and angels, gorillas and winged hermaphrodites and a sculpture of the head of Christ wearing his crown of thorns which protrudes from a painting of a crucifix. Perhaps best of all, is a coloured relief of the bust of a woman with an octopus stuck on her head (mirrored above by another woman and another octopus). All presented with no irony at all. Sgarbi has pulled off a rare achievement here: he has trawled through hundreds of works and assembled a vast selection of paintings and sculptures (there are more artists in his show than in Ralph Rugoff’s) without including a single one of any merit, not even by mistake.

Meanwhile, in the official Venice Biennale at the Giardini it is a particularly bad year for national pavilions. To be sure, there are some notable exceptions but they fall outside the scope of this article. Here, let us turn our attention to Romania: a giant puddle on the floor with some washing machines in one corner. Then to Egypt: an imagined Pharaonic tomb that looks like a reject film set from Liz Taylor’s Cleopatra complete with a row of sphinxes with video screens on their faces. Then to Russia which is curated this year by Mikhail Piotrovsky, the director of the Hermitage Museum in St Petersburg, who has asked artists to respond to works in its collection and has produced a show that amounts to a massive advert for his own institution.


Egypt’s Pavilion in the Giardini
© The Art Newspaper


But the most troubling display at the Venice Biennale is elsewhere. Christoph Büchel, the Swiss-Icelandic artist who turned a disused church into a mosque as Iceland’s contribution to the 2015 Biennale, has transported to the Arsenale a damaged fishing boat that sank in the Mediterranean on its way from Libya to the Italian island of Lampedusa on the night of 18 April 2015. Between 700 and 1,100 refugees died on board this ship which now stands in silent testimony to Europe’s indifference to the migration crisis and our completely inept handling of it.


Art can and should deal with the most pressing issues of our time and Büchel’s boat would easily be the most important inclusion in Rugoff’s Biennale if it were not for the fact that Büchel has chosen to provide no labels or signs near the rusting vessel. It is true that there is information about the boat and its history in the Biennale catalogue but only a small proportion of visitors purchase this. So many, if not most, exhibition goers will eat and drink in the shadow of this ship (it is positioned near a cafe) with absolutely no idea of the tragedy that unfolded there. We will trudge past it without knowing it is the site where hundreds perished because we have failed to solve one of the most urgent crises of our time. “Peak art world” as one user put it on twitter.