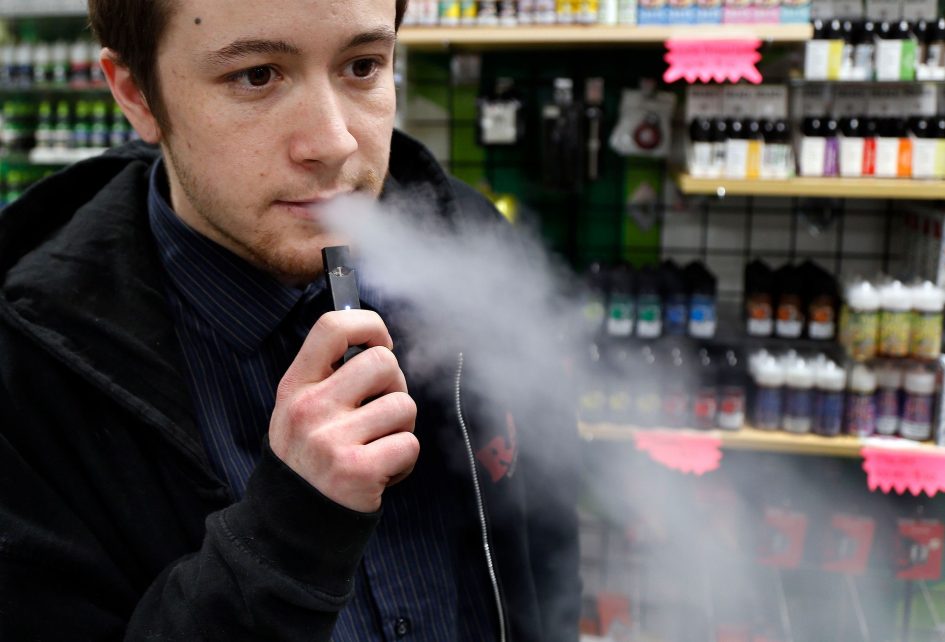 Nick Gregory, a 26-year-old manager, vapes on a JUUL at Botany Bay in Lexington, Ky.

Tobacco company Reynolds is fighting the Food and Drug Administration’s proposal to curb teen vaping, singling out one competitor it says the agency should rein in instead: e-cigarette maker Juul.

The FDA in March proposed limiting sales of fruity e-cigarette flavors to websites, vape shops and other retailers that impose age restrictions in response to federal data showing huge increases in teenagers vaping. The public comment period closed Tuesday. Reynolds, a unit of British American Tobacco, in its response said it opposes the plan.

The “FDA has already identified the main driver of youth interest: Juul,” said Reynolds, which makes Newport cigarettes and Vuse vapes. “As the agency’s public statements confirm, underage users disproportionately prefer Juul to all other products. … Armed with such knowledge, we believe the agency can take appropriately tailored steps to curb youth use.”

Former FDA Commissioner Scott Gottlieb repeatedly blamed the teen vaping “epidemic” on Juul, the clear market leader. The agency is looking into Juul’s marketing practices and conducted a surprise inspection of its San Francisco headquarters in the fall.

Yet faced with a surge in teen e-cigarette use, the FDA demanded plans from the top five e-cigarette manufacturers, including Reynolds, Altria and others. For its part, Juul says categorywide action is the best way to curb youth use.

“It is disappointing but not surprising to see a legacy tobacco company whose core business remains combustible cigarettes — the very product we intend to eliminate by offering adult smokers an alternative — attempting to thwart the category-wide regulation that’s needed,” Juul said in an emailed statement, adding that it supports the FDA’s draft regulation as a “starting point.”

Reynolds says the FDA’s plan to limit where the fruity flavors can be purchased will hurt adults who want to switch to e-cigarettes because they’ll be harder to find and won’t curb teen use because minors can always get them from older friends. It also says those restrictions would overstep the FDA’s legal authority.

Instead, Reynolds wants the FDA to tamp down on “irresponsible” marketing.

“At the end of the day, we are encouraging the FDA to use more appropriate regulatory action,” Dr. James Figlar, Reynolds’ executive vice president of research and development and scientific and regulatory affairs, said in an interview.

Critics often point to Juul’s early ad campaigns, which featured youthful looking models and bright colors regulators said appealed to teens. Juul has said it regrets the ads and has since rolled out new ads that feature older adults who share their stories of switching to the e-cigarette from cigarettes.

Reynolds debuted a commercial for its Vuse Alto e-cigarette earlier this year. Vapor products are not subject to restrictions barring cigarette ads from television and radio.

Juul and Marlboro cigarette maker Altria, which owns a 35% stake in Juul, have both said they support the agency’s proposal. Juul in November stopped selling its fruity flavors to retailers, instead saying it would only sell them directly to consumers on its age-verified website.

The FDA did not immediately comment on Reynolds’ letter.