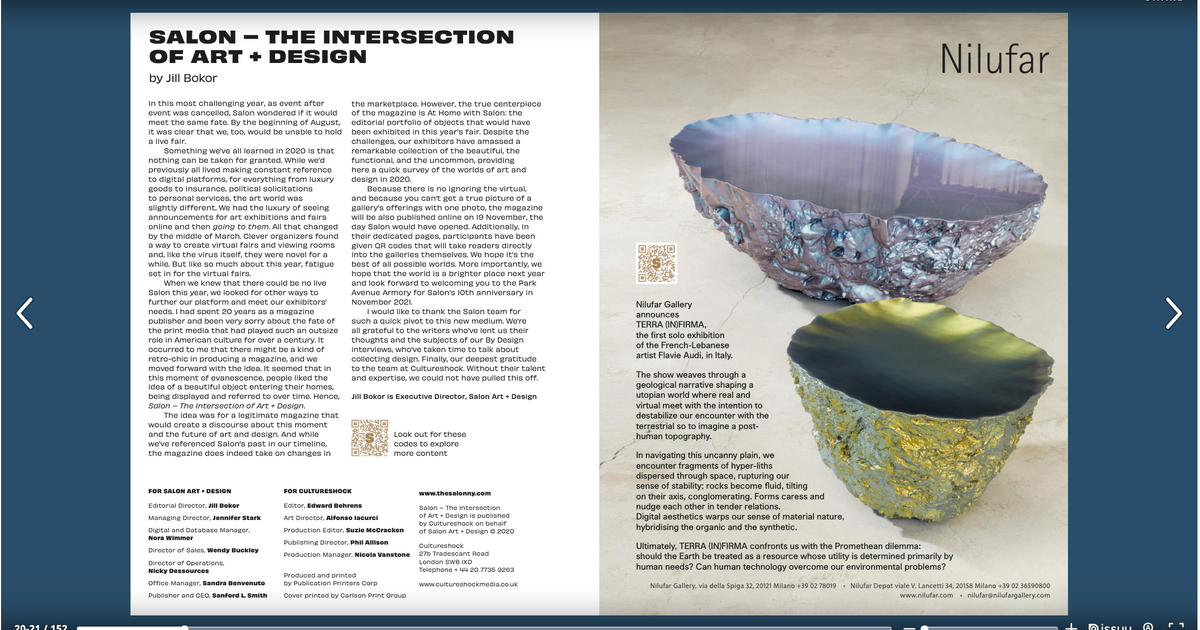 What sets the publication apart from the traditional fair catalogue is the liberal use of QR codes, which when scanned by a reader’s mobile device, launch multi-media content such as videos and online exhibitions

Rather that setting up yet another platform of online viewing rooms when its physical fair in November was cancelled due to the coronavirus, New York’s Salon Art + Design took a different route: it has produced a luxury publication, filled with interviews, features and objects from its roster of exhibiting galleries. The mix of magazine and catalogue was released digitally on the fair’s website on Thursday, with a “collectors copy” available for purchase for $25. “My idea really was to have the sense that you are walking up and down the aisle of the show,” the fair’s executive director, Jill Bokor, told The Art Newspaper, “to have collectors think about something, to have a moment to buy something beautiful, or look at something you’ve never seen before.” Bokor has decades of experience in the magazine field, having served as publisher and editorial director of Art + Auction and ID, and for this new venture she brought in the British agency Cultureshock Media, which has created publications for Sotheby’s, Tate and the Victoria & Albert Museum. The result is a glossy 152-page printed volume that includes contributions from more than 45 galleries that regularly show in the fair, as well as leading collectors of art and design. A feature that sets the publication apart from the traditional fair catalogue is the liberal use of QR codes, which when scanned by a reader’s mobile device, launch multi-media content such as videos and online exhibitions. But while reactions from the exhibitors have been positive, the magazine was never intended to replace the physical fair, Bokor says. “This was not a money-making venture,” she says. “It was never a substitute for the Salon. It was really to keep the platform alive for both of us and our exhibitors.” Next year, the plan is to hold a live event for the fair’s 10th anniversary, from 11-15 November 2021.

Jewish collections looted by the Nazis to be examined and traced in new database
Provocative Marilyn Monroe sculpture to return to Palm Springs—permanently
To Top
error: Content is protected !!
Top