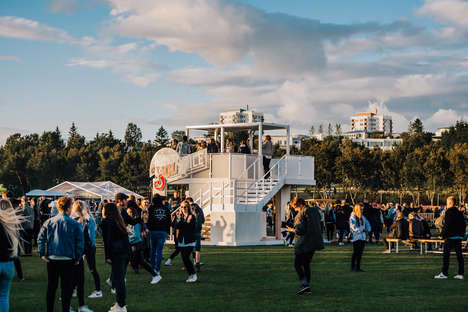 Sol Beer Invited Us to ‘Taste the Sun’ and Explore Iceland

What do you get when you combine Sol beer, 24-hours of daylight, some of the best global musical artists and Iceland? One of the most spectacular events to date: The Secret Solstice Festival. Sol has partnered with the only festival in the world where the sun never sets, inviting attendees to ‘Taste the Sun’ for three days over the summer solstice, and I was lucky enough to attend.

The first day began with a journey to one of the largest glaciers in the world, Langjökull. After driving up and over the glacier, we reached the entrance of a tunnel that would lead us to the inner core of this man-made ice cave. After strapping on our crampons, we ventured down, following the glowing lights through the ice and chasing the music that was growing louder. When we arrived at the party, we were surrounded by people dancing to British DJ Mr. G, who was spinning funky throwback tunes with a Sol beer in-hand. Instantly, I was swept away and lost in the energy of the group.

Any other festival would have ended there, but this is no ordinary festival. Sol doesn’t just want you to see the sun, they want you to taste it. So, we made our way to the capital city of Iceland, Reykjavík, where the main festival grounds were located. As we entered, we passed two stages with artists playing and people dancing, a silent disco with three DJs mesmerizing a packed audience, a bumper cart stadium, bungee jumping, food trucks and a sea of Icelanders bedazzled with glitter and rhinestones ready to party.

We arrived at the Sol booth where we could dance and keep cozy while still having a perfect view of the third and main stage. Between acts, we explored Sol’s own private silent disco, listening to some of the sunniest songs that were crowd-sourced by consumers before the event. The perfect way to end the brightly lit night.

Day two brought on the feels as we listened to three Icelandic acoustic and electronic performances in the depths of a lava cave, lit only by our headlamps and a few red and blue backlights. The voices of the performers echoed off the walls and sent chills down my spine as the sounds surrounded us. The experience left me stunned, momentarily dulling my eager anticipation to check off two bucket list artists who we would see that night: Sugar Hill Gang and The Black Eyed Peas. It was a truly memorable night that could not have been replicated anywhere else, as was evidenced by will.i.Am ending the show by saying he would have typically asked the audience to turn off all their phone and lights, but that wouldn’t have made a dent against the sun still beaming down on us.

On our third and final day, after having explored the depths of Iceland, we were now going to see it from the skies. A helicopter tour brought us along the coast, over waterfalls, along the tectonic plates that divide North America and Europe, and over steaming geysers. When we arrived at the festival grounds for our last hoorah, we channeled all of the positive energy that was fueled by the magical adventures we had just experienced in the last few days to dance and sing in the sunlight one last time.