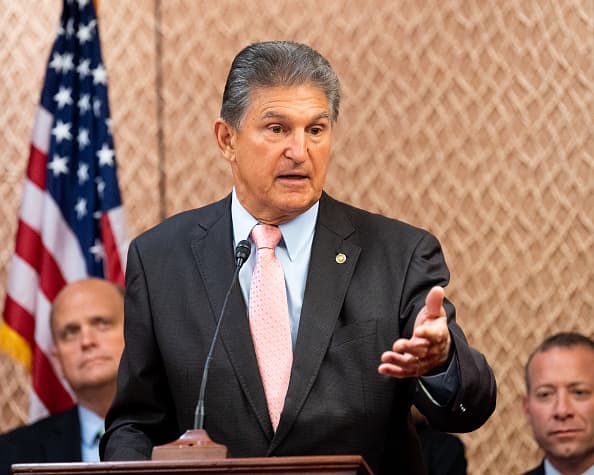 Senator Joe Manchin (D-WV) is leading a bipartisan group of lawmakers who are trying to broker a $908 billion stimulus plan. He told “The News with Shepard Smith” in an interview Wednesday that “this is truly an emergency package,” as Americans wait another day for the federal government to pass a critical relief bill amid the coronavirus pandemic.  “This is an emergency to get us through the first quarter, which will be the most difficult quarter that we’ve ever had,” Manchin said. “We finally have moved everybody to say it takes $900 billion to get us through the most challenging times.”The $908 billion bipartisan framework includes a $300 a week boost in unemployment benefits, and ensures that expanded benefits don’t get cut off at the end of 2020. It now includes up to $300 billion for the Paycheck Protection Program, $35 billion for hospitals, $10 billion for Covid testing and tracing, and $6 billion for vaccines. Host Shepard Smith pointed out that there is no money for direct payments to people in the Senator’s plan. Manchin said that “there is not,” and he emphasized that the emergency “is more with the people who are unemployed.” Manchin’s plan does not clarify how to distribute money to local and state governments, as well as the language to protect businesses from lawsuits. “This is not a do-all end-all,” Manchin said. “Joe Biden says this is a ‘down payment.’ He comes in as our president in January, he’ll put basically another package to take us out of this mess that we have.”A bi-partisan group of lawmakers on Capitol Hill have been scrambling to come up with a Covid relief deal before 12 million Americans lose their unemployment benefits after months of gridlock between the White House and top democrats.House Speaker Nancy Pelosi (D-CA) and Senate Minority Leader Chuck Schumer (D-NY) just rejected the White House’s latest offer, which included $600 stimulus checks, but took funding away from unemployment benefits.”I think cutting unemployment to virtually almost nothing is a very, very bad idea, and so I’m against that,” Schumer said. On the Senate floor, Majority Leader Mitch McConnell (R-KY) put the onus on Democrats for slowing progress on a relief bill.”At every turn they’ve delayed, deflected, moved the goalpost and made the huge number of places where Congress agrees into a hostage … for the few places where we do not agree,” said McConnell. Manchin assured Smith that a bill would be completed soon to bridge the gap until President-elect Biden is sworn in and another package is passed.”We’re going through this thing and we’re going to have it done, we will,” Manchin said. “No one thought we would have anything that we brought out today, we brought 90% of a bill and we showed you line by line.”Smith noted that Manchin’s compromise was not a bill, and added that the fact Congress has failed to act on behalf of the American people for 257 days amid a pandemic that has killed over 280,000 is proof that the current system “is broken.” The “Gang of Eight” member advised taking “the money out of the system, Citizens United, let us know who’s throwing money at this.” He continued with suggestions on how to fix it. “Make it an ethical violation if a senator goes out and campaigns against another senator,” Manchin said. “Where I come from, if I come to work everyday and you try to get me fired, we’re going to talk in the parking lot after work, that’s where I come from.”