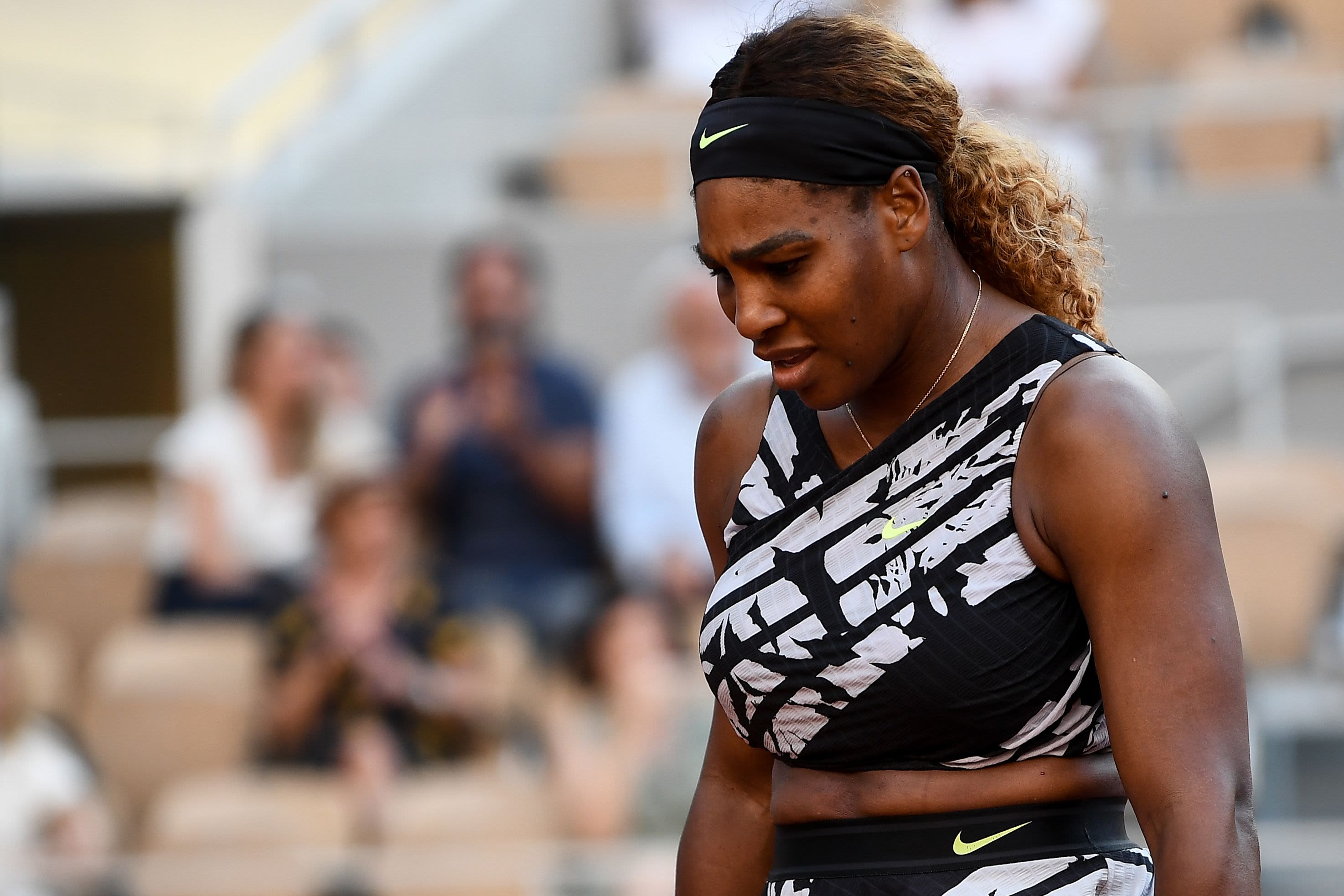 Serena Williams of the US reacts during her women’s singles third round match against Sofia Kenin of the US, on day seven of The Roland Garros 2019 French Open tennis tournament in Paris on June 1, 2019.

Serena Williams’ quest for a 24th Grand Slam title ended with her earliest loss at a major tournament in five years.

Williams was outplayed in the third round of the French Open by 20-year-old American Sofia Kenin, who used clean, deep groundstrokes to put together the 6-2, 7-5 upset Saturday.

“In that first set, in particular, she hit pretty much inches from the line, and I haven’t played anyone like that in a long time,” Williams said. “I just saw a player that was playing unbelievable.”

It was the second significant surprise in a matter of hours: Earlier in the day, No. 1 seed Naomi Osaka was eliminated 6-4, 6-2 by 42nd-ranked Katerina Siniakova of the Czech Republic. That ended Osaka’s 16-match Grand Slam winning streak, which included titles at the U.S. Open final in September — when she beat Williams in the final — and at the Australian Open in January.

Osaka was trying to become the first woman to win three consecutive major trophies since Williams grabbed four in a row in 2014-15, a run that was preceded by a second-round loss at Roland Garros and a third-round loss at Wimbledon.

Since those early-for-her defeats, Williams had won six of the 14 majors she entered to surpass Steffi Graf’s professional-era record of 22 Grand Slam singles championships. With 23, Williams stands one away from Margaret Court’s mark for the most in tennis history; Court played in both the professional and amateur eras.

Serena Williams (USA) in action during her match against Sofia Kenin (USA) on day seven of the 2019 French Open at Stade Roland Garros. Jun 1, 2019; Paris, France.

Williams, who is 37, sat out four Slams in 2017-18 while she was off the tour to have a baby. Her first major tournament back was last year’s French Open, where she withdrew before a fourth-round match because of a chest muscle injury. She went on to reach the finals of Wimbledon and the U.S. Open, before wasting match points during a quarterfinal loss at the Australian Open.

Williams came to Paris having played only four matches since then; she withdrew from two tournaments because of an injured left knee and another because of illness.

Williams had said she considered not entering the French Open at all.

“I’m glad I came, at the end of the day,” she said, “but it’s been a really grueling season for me.”

She struggled through her opening match at the French Open, which she has won three times, and again against the 35th-ranked Kenin, who never before had made it to the round of 16 at a major.

But Kenin played quite well, never showing a trace of nerves. It was Williams whose strokes were off target: Her 34 unforced errors were twice as many as Kenin’s total.

Remarkably, Kenin broke Williams four times, while only ceding one of her own service games.

“Just playing against Serena, you’ve really got to fight for every point,” Kenin said. “She’s such a tough player. I’m just so happy with this win.”

And then, her voice choking on her words, Kenin added: “Obviously, you can tell, with my emotions.”

After trailing 3-1 in the second set, Williams appeared to be getting back into the match, breaking back and then holding for a 4-3 lead with the help of three aces. After two of them, Williams stared down Kenin, who had questioned a call earlier in that game.

At 5-all, though, Kenin got the last break she’d need with a forehand return winner off a 102 mph serve. She ran to her sideline seat and pressed a towel against her face.

There was one last key moment: While serving for the victory, Kenin faced a break point, but Williams’ miscue let it go by. One last error by Williams — a backhand that sailed long — ended things.

Like Williams, who dropped eight of the match’s first 10 games, Osaka couldn’t muster a comeback after falling way behind.

Sofia Kenin (USA) in action against Serena Williams (USA) on day seven of the 2019 French Open at Stade Roland Garros.

“I just feel like there has been a weight on me, kind of,” said Osaka, who was seeded No. 1 at a major tournament for the first time.

She fell behind by a set and a break in every match at Roland Garros.

“I could see,” Siniakova said, “that she’s not so confident like she was.”

Osaka said Saturday she felt tired and was dealing with a headache.

Siniakova never had reached the fourth round in singles in 18 previous Slam appearances. She is better known for her doubles success, winning championships at the French Open and Wimbledon last year and topping the rankings.

She is the first woman ranked No. 1 in doubles to defeat the singles No. 1 in more than 30 years, according to the WTA: The last occasion was when Martina Navratilova beat Steffi Graf at the 1987 U.S. Open.

“I mean, it’s incredible. It’s amazing. It’s the thing I couldn’t believe,” said Siniakova, who will face 2017 U.S. Open runner-up Madison Keys next. “It was my best tennis.”

It decidedly was not Osaka’s, who wound up with a hard-to-believe 38 unforced errors; Siniakova made 13.

The first tennis player from Japan to be ranked No. 1 spoke about eyeing a third consecutive major title — and moving halfway to a true Grand Slam.

“It’s weird, but I think me losing is probably the best thing that could have happened,” the 21-year-old Osaka said. “I think I was overthinking this calendar Slam. For me, this is something that I have wanted to do forever.”