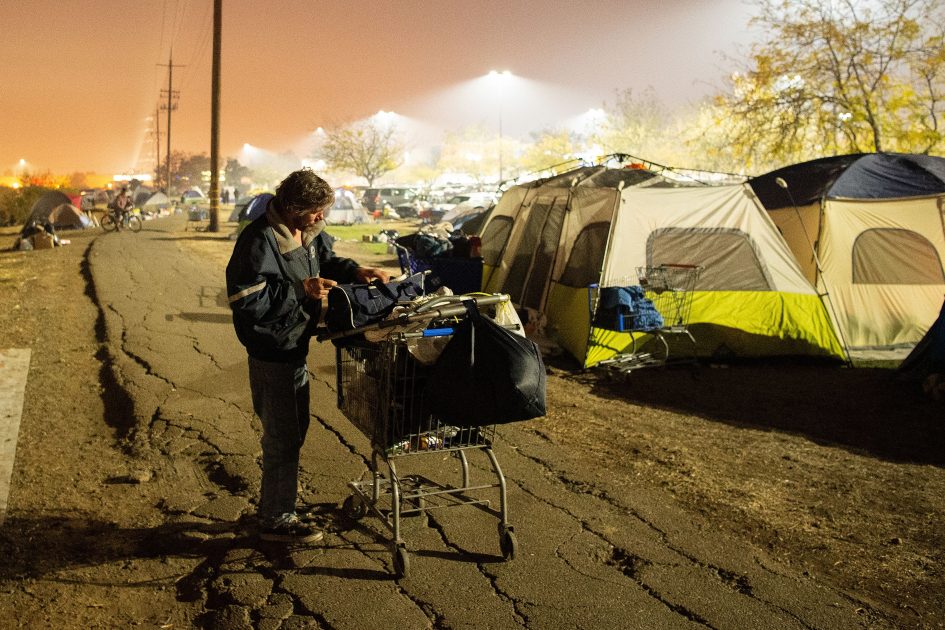 A man displaced by the Camp Fire, tends to his belongings at an evacuee encampment at a Walmart parking lot in Chico, California on November 19, 2018.

The Camp Fire disaster in November 2018 displaced nearly 35,000 residents in the Paradise, California, area, and even six months later, a large number of families are still unable to find homes.

The blaze in Northern California’s Butte County killed 86 people, destroyed about 14,000 homes and left most of the town of Paradise in ruins. It ranks as the deadliest and most destructive fire in California history.

“There’s a lot more than 1,000 families out there looking for housing,” said Ed Mayer executive director of the Butte County Housing Authority. “There also a lot of elderly and disabled who have been in Paradise for decades who were displaced.”

On Wednesday, Cal Fire investigators announced that Pacific Gas & Electric’s electrical transmission lines caused the Camp Fire. PG&E, the state’s largest electric utility, filed for bankruptcy protection in late January after being hit with a flood of lawsuits from devastating wildfires in Northern California in 2017 and 2018, including the Camp Fire.

“Some of the survivors are living in trailers, and others are living in parking lots in tents,” said Mike Danko, a Redwood Shores, California-based attorney representing several thousand victims of the Camp Fire. “People have lost not only their homes but their jobs.”

Added Danko, “The future for these folks is very uncertain. And even the ones who are lucky are living with family members, perhaps, and they are sleeping on couches.”

An used car dealership is seen engulfed in flames during the Camp Fire in Paradise, California, November 8, 2018.

According to a Federal Emergency Management Agency spokesperson, the agency is actively looking to house approximately 1,000 Camp Fire survivors through a combination of commercial mobile home parks, both in and out of the burn area. FME also is looking for temporary housing communities and private property placements.

The 2018 blaze destroyed about 90% of the town of Paradise, which once had a population of nearly 27,000 residents. Survivors of the disaster have since been relocated to nearby communities, including Chico, Redding, and Oroville. There was already a tight supply of affordable housing in the region before the fire but the disaster and ensuing demand has driven up prices.

The median sale price in Chico for a single-family home in October before the fire was $378,000, according to Century 21 Select Real Estate in Chico. In March, the media price stood $436,000, or a 15% increase.

“There’s increased demand and bidding wars all over the market,” said Austin Barron, an agent with Century 21 in Chico. “We still have people from the Bay Area looking for homes here, so they are competing in a sense with Paradise fire victims on properties.”

Butte County officials estimate there are now roughly 19,000 survivors of the Camp Fire living in Chico and about 5,000 living in Oroville — two cities that have grown nearly 20% since the November 2018 disaster. Also, officials said at least 100 households displaced by the Camp Fire moved to other states, primarily Nevada, Oregon, Florida, and Illinois.

“There wasn’t housing in Oroville or Chico for those folks, so they’re all living in travel trailers, extra bedrooms, garages, sheds, and any nook or cranny that can possibly accommodate a human being,” Mayer said. “It may take people two to three years to figure out they won’t find housing locally unless they’re lucky to have a FEMA-manufactured housing unit or such.”

Meantime, government-led debris removal is in full swing in Paradise and involves the cooperation of state, federal, and local agencies. Crews are looking for household hazardous waste, such as e-waste, pesticide, propane tanks, paints, batteries and asbestos siding.

“Debris removal is going along more quickly than anticipated, and that should be winding up toward the end of the summer,” said Jim Kyle, a spokesman for the California Governor’s Office of Emergency Services.

Also, more than one-third of the pine trees in Paradise are expected to be removed since they were scarred in the fire. Some of the trees may end up getting used for recycling.

“There’s a great effort by folks to get up there and rebuild as fast as possible,” said Mayer. “We are starting to see the first signs of rebuilding.”